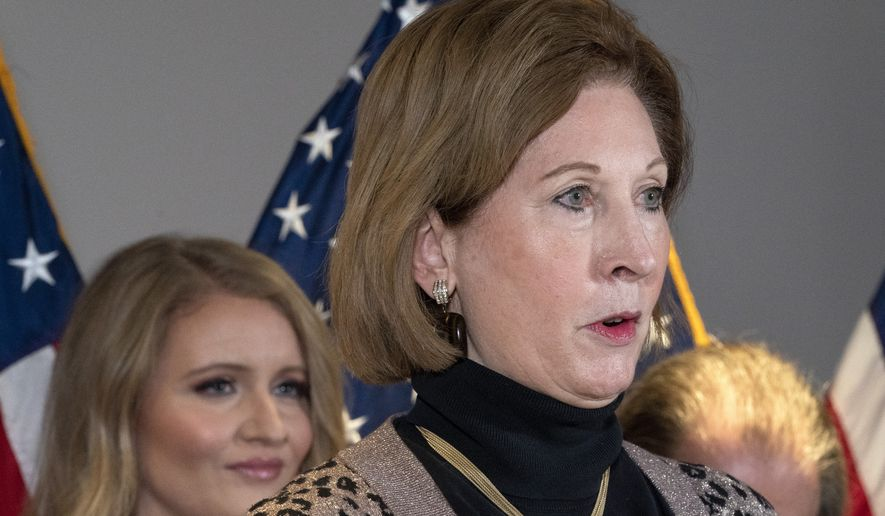 Both suits target voting machines made by Dominion Voting Systems, which are used in 28 states. The Georgia complaint asserts that the election fraud scheme relied primarily on “old-fashioned ballot stuffing.”

“The scheme and artifice to defraud was for the purpose of illegally and fraudulently manipulating the vote count to make certain the election of Joe Biden as President of the United States,” the lawsuit contends.

She said the same pattern of election fraud and voter fraud “writ large occurred in all the swing states with only minor variations … regarding Michigan, Pennsylvania, Arizona and Wisconsin.”

“Indeed, we believe that in Arizona at least 35,000 votes were illegally added to Mr. Biden’s vote count,” Ms. Powell said in a footnote.

Ms. Powell was a member of President Trump’s post-election campaign legal team until she was bumped out last week. But she vowed to move ahead with legal action seeking to overturn the election results, while the president’s lawyers are doing the same in several states.

Her 104-page complaint in Georgia asked the federal court to issue an injunction “prohibiting the Governor and Secretary of State from transmitting the currently certified results to the Electoral College based on the overwhelming evidence of election tampering.”

The lawsuit states that at least 96,600 absentee ballots were requested and counted, but were never recorded as being returned to county election boards by the voter.

Georgia and Michigan have certified their election results, with Mr. Biden winning both states. He won Georgia by 12,670 votes out of 5 million cast, or 0.2%. The Democrat won Michigan by about 154,000 votes.

Ms. Powell argues that Mr. Kemp and Mr. Raffensperger “rushed through the purchase of Dominion voting machines and software in 2019 for the 2020 Presidential Election” without assessing whether the machines were secure from tampering.

“There is incontrovertible physical evidence that the standards of physical security of the voting machines and the software were breached, and machines were connected to the internet in violation of professional standards and state and federal laws,” the lawsuit states.

Ms. Powell filed the suits late on the same day that the president pardoned one of her clients, former National Security Adviser Michael Flynn.

Posted by theodore miraldi at 12:39 PM