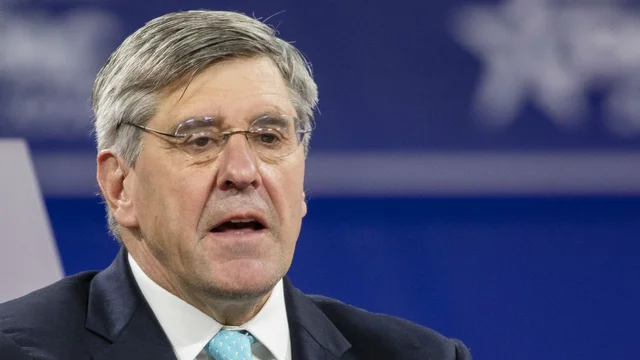 Stephen Moore, an economist and outside adviser to President Trump, said he thinks the president will leave office "triumphant," pointing to optimistic projections for the economy and noting the announcement that a COVID-19 vaccine could be just weeks away.

"I think [Trump] is going to leave the office triumphant … By early next year we will have a vaccine that nobody thought was possible," Moore said during an interview with John Catsimatidis on his radio show on WABC 770 AM that aired Sunday.

Moore, co-author of the book "Trumponomics," also touted Trump's actions on the economy. He pointed to a "not probable but possible" forecast about the U.S. economy in the coming weeks leading to 2021, saying, "We could actually end up with the economy in positive territory from where it was a year ago."

The economist noted that the Bureau of Labor Statistics reported promising data about the nation's unemployment rate, falling to 6.9 percent in October from its over-14 percent peak in the second quarter. He called it "an amazing comeback."

"I'm going to call this the greatest economic comeback in American history," Moore said. "And it continues to roll on … It's just astonishing."

Despite a 7.4 percent increase in gross domestic product (GDP) in the third quarter of 2020 – a rise of 33.1 percent at an annual rate – a lack of new economic stimulus being able to pass through Congress has raised questions among some experts about the economic stability entering 2021, according to a recent report by the Center on Budget and Policy Priorities, a progressive think tank.

Moore's comments come as Pfizer announced Friday the pharmaceutical company would seek Emergency Use Authorization (EUA) from the Food and Drug Administration (FDA) for its vaccine candidate after showcasing last week a 95 percent efficacy rate.

Following Moderna's announcement that its vaccine candidate achieved a 94.5 percent efficacy rate, futures on the S&P 500 and Dow Jones rose by 1.4 to 1.8 percent, Business Insider reported.

"This is an incredible tribute to Operation Warp Speed. There's no way Joe Biden would have been able to do this … It will save hundreds of thousands of American lives and may be tens of millions of lives around the world," Moore said.

Biden made Trump's handling of the coronavirus pandemic a centerpiece of his successful White House bid this year and has vowed to take stronger action to control the virus once in office.

Meanwhile, Trump has not conceded the election and his campaign has launched various legal challenges in states across the country.

Trump has lauded a soon-to-be disbursed vaccine for priority-use among health workers and vulnerable Americans, while raising concerns that Biden may take credit for any successful vaccine.

"They never thought a Vaccine could be done so soon but don’t worry, they will try to give the credit to Biden!" Trump tweeted Friday night.

Moore compared Trump to the late British Prime Minister Winston Churchill, who led the United Kingdom through the heart of World War II but lost election in 1945 before winning a second term years later.

"Sometimes I think he's like Winston Churchill … The voters dumped Churchill a couple of times. And he kept coming back … Trump does not need to… put his tail between his legs. If Biden is the one who's pronounced the winner, I think Trump goes out in a triumphant, [a] Douglas MacArthur kind of exit."

*John Catsimatidis is an investor in The Hill.

Posted by theodore miraldi at 7:41 AM