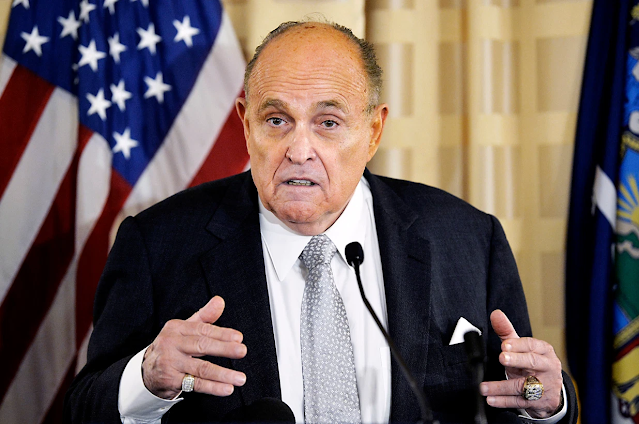 President Trump’s attorney Rudy Giuliani on Sunday insisted that the presidential election would be “overturned,” claiming he had “evidence” that “corrupt machines” had deleted millions of votes for Trump — but couldn’t share it.

In an interview on Fox News’ “Sunday Morning Futures,” the ex-Big Apple mayor, who was recently tapped to lead Trump’s post-election legal fight after his predecessor contracted COVID-19, claimed that the president had actually won the key swing states that were called for Joe Biden.

“In every one of those states, we have more than enough illegal ballots already documented to overturn the result in that state,” Giuliani said, erroneously claiming that the mail vote was invalid because Republicans hadn’t been allowed to observe the count.

“They didn’t allow Republicans in those key places to observe the mail vote. That makes the mail vote completely invalid,” he told anchor Maria Bartiromo.

Trump’s re-election campaign has filed a flurry of lawsuits contesting the vote count in battleground states, but some of those cases have already been rejected by judges who ruled their claims of fraud were unfounded or “hearsay.”

A recount would also have to overcome Biden’s commanding 65,000 vote advantage in Pennsylvania or 146,000 lead in Michigan, for example, to undo the election result.

Trump’s legal team threw in the towel on an Arizona lawsuit on Friday, acknowledging that the wouldn’t overtake Biden in the Grand Canyon State.

Nonetheless, Giuliani claimed that the campaign had enough affidavits from witnesses who reportedly saw fraud to void hundreds of thousands of votes for the former veep.

“We already have enough affidavits from people who were pushed out from being able to observe, so in each one of those states that he lost narrowly, he won those states probably by 2-3 percent,” he told Bartiromo.

Trump and his allies have continued pushing claims of widespread fraud. The Cybersecurity & Infrastructure Security Agency, the federal agency that oversees US election security, said the election was “the most secure in American history.”

The claim from the president is that Dominion Voting Systems, a Canadian voting software company that provided machines used in 28 states, deleted or switched votes for Trump.

The company has denied the claim which has also been debunked by the Associated Press and The New York Times.

Giuliani insisted he had proof — but could not show it yet.

“We have proof that I can’t disclose yet,” Giuliani said of the “corrupt machines.”

For President Trump, a larger fight endures after 2020 election: Goodwin

“This has to be examined, Maria, beyond this election, which I believe will get overturned,” he went on.

Sidney Powell, another Trump 2020 attorney, also told Bartiromo that Trump had won by “millions of votes.”

As on Sunday morning, Biden leads Trump in the Electoral College, 306-232, and leads in the popular vote by more than 5.7 million votes, according to the AP.

“President Trump won by not just hundreds of thousands of votes, but by millions of votes that were shifted by this software that was designed expressly for that purpose,” Powell said, repeating the Dominion theory.

“We have so much evidence I feel like it’s coming in through a fire hose,” she said.

States will start moving to certify the election results by Dec. 8, which means that Trump’s legal team has a shrinking window to prove its claims of fraud in court.

Posted by theodore miraldi at 2:55 PM