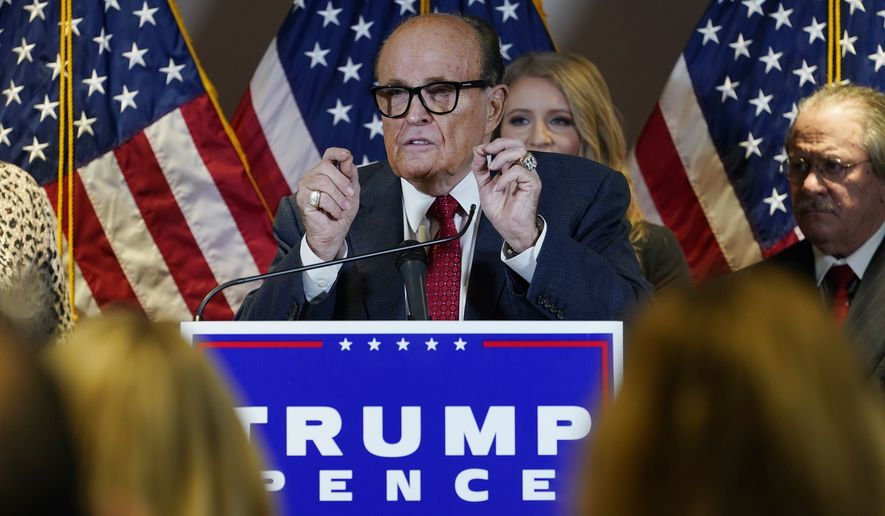 President Trump‘s legal team on Thursday accused Democrats of engaging in widespread voter fraud that, when rectified, will flip the projected outcome of the Nov. 3 election to a victory for the president.

In a lengthy press conference in Washington, the president’s lawyers said there are enough ballots disputed in six states that could reverse the projected win of presumptive President-elect Joseph R. Biden — either through absentee balloting or by a flawed software system.

“We more than double the number of votes needed to overturn the election in terms of provable illegal ballots,” Mr. Giuliani said. “This was a disgraceful thing that was done to this country.”

In Michigan, the Trump campaign said a truck pulled into a counting center in Detroit at 4:30 a.m. with only “Biden” ballots. They estimate about 50,000 of those were triple-counted.

The campaign is also contesting roughly 40,000 ballots in Madison, Wisc., where they said absentee ballots were counted that did not have proper applications, which is dictated under state law. The president is behind in Wisconsin by roughly 20,608 votes.

In Pennsylvania, the campaign has charged in federal court that roughly 670,000 ballots were counted without having GOP poll observers review them. They also say Democratic counties allowed voters to correct mail-in ballots, while GOP counties did not, creating a constitutional crisis.

The president currently lags behind Mr. Biden in the Keystone State by 82,606 votes.

Sydney Powell, an attorney for the president working with Mr. Giuliani, said an algorithm is believed to have been used to diminish Mr. Trump’s votes while elevating Mr. Biden’s count. She said the legal team has mathematical evidence in a number of states of Mr. Trump’s votes being trashed.

“The machines were easily accessible to hackers,” she told reporters. “A full-scale criminal investigation needs to be taken immediately.”

Posted by theodore miraldi at 3:11 PM