Barr says he has 'NO PLAN' to Appoint Election, Hunter Biden Special Counsels

'To this point I have not seen a reason to appoint a special counsel,' outgoing attorney general says 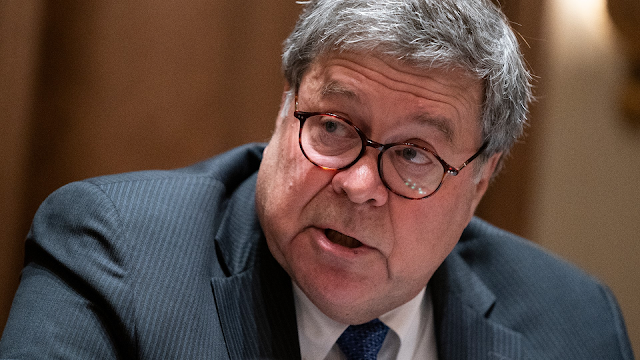 Attorney General William Barr on Monday said he has "no plan" to appoint a special counsel to take over the federal investigation into Hunter Biden’s "tax affairs," or one to probe allegations of widespread voter fraud in the 2020 prwsidential election.

Barr announced last week that he would depart from his post as attorney general on Dec. 23 — before the end of the Trump administration.

Republicans have been demanded that a special counsel be appointed to continue the federal investigation into Hunter Biden to ensure that it continues through the incoming Biden administration. President Trump reportedly had been discussing a potential special counsel for that investigation.

But Barr, on Monday, said he has no plans to appoint a special counsel for that investigation, or one to review the election, that before he leaves the Justice Department.

"I think to the extent that there's an investigation, I think that it's being handled responsibly and professionally," Barr said Monday about the investigation into Hunter Biden. "To this point I have not seen a reason to appoint a special counsel and I have no plan to do so before I leave."

"To this point, I have not seen a reason to appoint a special counsel and I have no plan to do so before I leave," Barr said Monday during a press conference.

Hunter Biden confirmed earlier this month that he is under federal investigation for his "tax affairs."

A well-placed government source told Fox News that Hunter Biden has been a subject/target of the grand jury investigation. According to the source, a "target" means that there is a "high probability that person committed a crime," while a "subject" is someone you "don't know for sure" has committed a crime.

The source said President-elect Biden is not a subject of any grand jury investigation at this time.

The source also told Fox News that this investigation was predicated, in part, by Suspicious Activity Reports (SARs) regarding suspicious foreign transactions.

Another source familiar with the investigation told Fox News the SARs were regarding funds from "China and other foreign nations."

A Treasury Department official, who did not comment on the investigation, spoke broadly about SARs, telling Fox News that SARs are filed by financial institutions "if there is something out of the ordinary about a particular transaction."

The official told Fox News that the mere filing of a SAR does not mean there has been a criminal act, or violation of regulations, but instead, flags that a transaction is "out of the ordinary" for the customer. The official noted, though, that a SAR could be part of a money laundering or tax investigation.

The investigation, according to a source familiar with the matter, began in 2018.

Meanwhile, Barr, earlier this month, said that the Justice Department has not uncovered evidence of widespread voter fraud that could change the outcome of the 2020 presidential election, despite claims by President Trump and his campaign’s legal team.

Barr, during an interview with The Associated Press earlier this month, said that U.S. attorneys and FBI officials have been working to follow up on specific complaints and information they have received, but have not uncovered enough evidence that would change the outcome of the election.

"To date, we have not seen fraud on a scale that could have affected a different outcome in the election," Barr told The Associated Press.

Barr, earlier this month, made public that he appointed U.S. Attorney from Connecticut John Durham, who had been reviewing the origins of the Trump-Russia probe, as special counsel, to ensure that investigation could continue.

Posted by theodore miraldi at 11:52 AM