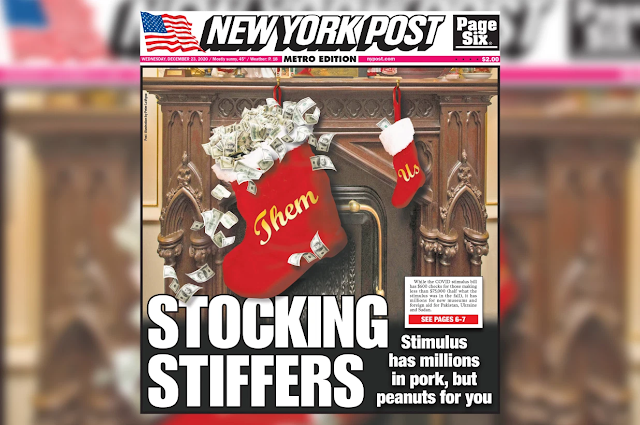 Uncle Sam is about to play Santa for America — and the world.

Congress passed a $2.3 trillion COVID-19 relief and government funding bill that gives just $600 to most Americans struggling during the COVID-19 pandemic — while doling out gifts to foreign countries and powerful lawmakers.

In addition to the slim stimulus cash payout, the bill contains a $300 weekly unemployment supplement, $284 billion in loans to small businesses and money for transit systems and entertainment venues hard hit by the virus.

The COVID-19 legislation — which was combined with the nation’s regular annual spending bill — also contains more pork than a Christmas ham.

The legislation adds not one but  two National Mall museums, $10 million for “gender programs” in Pakistan and $2.5 million for “internet freedom.”

The 5,593-page package wasn’t available until around 2 p.m. Monday before it passed in the House around 9 p.m. and in the Senate before midnight. President Trump is expected to sign the bill.

Here are a list of items — other than the main COVID-19 relief — the bill contains:

“The Senate just passed another major bipartisan, COVID-19 relief package,” he said. “The American people can rest assured that more help is on the way, immediately.”

Despite having supported $1,200 cash payouts in a bill that passed the House earlier this year, House Speaker Nancy Pelosi (D-Calif.) tweeted her support for the legislation.

“Pleased that we were able to get so much done #ForThePeople in the closing days of the 116th Congress,” she said.

Not everyone in congress was pleased with the bill.

Some of the items in the large deal arguably would not have passed on their own.

For example, in the past decade multiple attempts to punish online piracy prompted broad social backlash and lobbying campaigns that swamped the Capitol Hill switchboard and ultimately killed the efforts.

Posted by theodore miraldi at 10:08 AM