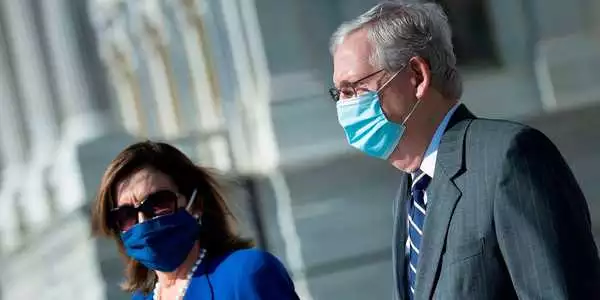 Stiffing the American Public when they are down is something that Congress has perfected. Front loading the Stimulus Relief Package with ridiculous and non-essentials should be enough to create a nationwide revolt in what may very well be the nation's greatest challenge in modern times.

Yet, our new nobility on Captial Hill sees another opportunity to drain the Treasury of every last cent to satisfy commitments made to the privileged contributors that sustain their power. Forget the millions of Americans out of work by their edicts derived from faulty science and emotional pandering. The Do as I Say, and in your pocket Liars are just being the Swamp Creatures at Foggy Bottom.

Regardless of the fact, which seems to be the only narrative the leaders of the lost adhere, a Bill which is supposed to help the needy is presented at the 11th hour knowing its 5,000 pages could never be read and scrutinized. Signing a Bill presented in Congress by anyone, Republican or Democrat should be unlawful and punishable by expulsion from Congress. And yet, the majority of both gleefully affixed the collusion against the American People. That is a Fact!

You don't need to be an economist to understand that less Stimulus means more citizens will fall farther behind. My question is, what the hell is going on? All the outrage from Congress about Trump not signing this mean-spirited slap across the face of Americans is ludicrous and just plain evil.

The Democrats, in particular, have been pulling this bait switch with outright contempt for taxpayers for years. Both parties have the gall loading pork on Emergency Funding while Americans are hurting. Talk about in your face corruption by our flawed Public Servants. While you are paying them for their costly lives and bloated expense accounts, they, in turn, restrict you from feeding your families and leaving your residence. Doesn't sound like Liberty and Freedom, does it?

So, maybe it's time to fight back!

Blaming the President for not wanting to sign a Bill that every signator should have been ashamed to vote for. Expecting to read over 5,000 pages in less than 5 hrs. just goes to show the Democrats thought they could  get away with the same nonsense they did with the Affordable Care Act. And there was Nancy Pelosi the Geriatric/Adolescent cheering her ragtag team of crooks to sign it, then read it.

How about a Clean Bill? Do your damn jobs!  Make Americans First before One Single Dollar is allocated to our enemies!

Posted by theodore miraldi at 8:14 PM