Democratic lawmakers push back on testimonies in rowdy hearing 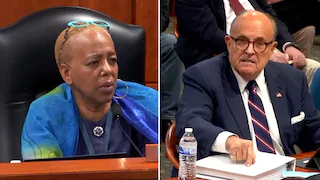 President Trump's personal attorney Rudy Giuliani appeared in Michigan at an at-times heated hearing before the state’s House Oversight Committee to address claims of voter fraud during the 2020 presidential election.

Several witnesses were brought forward with various claims of fraud, each hitting a different role in the election process.

GIULIANI TO BRING WITNESSES OF 'VOTER FRAUD' TO MICHIGAN HEARING

The first witness, Jessy Jacob, who Giuliani said had never before testified, worked as an election worker in Detroit and complained about how she was treated by her supervisors. She also alleged election workers were coached on how to alter ballots and said she was advised not to request voter identification.

Jacob said she did not listen to the instructions and continued to ask voters for ID, for her “peace of mind.”

Jacob's testimony lasted nearly an hour -- which Chairman Rep. Matthew Hall, a Republican, requested be shortened to no more than 10 minutes for each of the following witnesses – and ended with a question from Rep. David LaGrand, a Democrat, asking Jacob if she was aware that Michigan does not require that voters show their identification in order to cast their vote, adding he's “always voted that way.”

Jacob seemed frustrated before citing a law that requires “zero to 14 days before registration time, you have to provide proof of residency.” LaGrand concluded his time saying she was “confused.”

Her testimony came under further scrutiny after Rep. Darrin Camilleri, a Democrat, asked why her testimony should be considered believable when Judge Timothy Kennedy dismissed her case due to a lack in credibility.

“I am not aware any such ruling; she’s never been a witness in court,” Giuliani said before Jacob answered.

“This is not a courtroom, this is a committee. Why do you keep objecting to what I’m saying here?” the Michigan representative threw back at Giuliani.

The hearing, which lasted well over the originally planned three-hour timeline, was interrupted with several calls for order by the chairman as the audience kept calling out from their seats. Committee members who were growing frustrated with the testimonies, several of which had already been deemed un-credible in the courts, also repeatedly interrupted proceedings.

The next witness, Melissa Carone, claimed that Jacob’s allegations were not credible “because she wasn’t even there.”

Carone had her own complaints, alleging that as a Dominion technician during election night, she witnessed Democratic votes being recounted up to “30,000” times.

The chairman had to smack his gavel several times throughout her testimony, which also lasted longer than the requested 10 minutes, due to interruptions of committee members and cheers from her supporters in the back of the room.

Carone concluded her testimony by alleging a theory that all the election workers were in on a scheme together to rig the election.

“Democrats like to ruin your lives,” she said as supporters applauded and Hall hit his gavel calling for order, “just like they do to Trump,” she added.

The testimony was an opportunity for the Oversight Committee to hear the allegations people have made of voter fraud during the election, though none of the “witnesses” were under oath – a circumstance that Rep. Cynthia Johnson, a Democrat, took issue with, repeatedly calling for them to be under oath.

Hall told Fox News that the reason they were not under sworn testimony is because the hearing was meant as “informational working sessions” and not as “legal proceedings.”

“We’re an Oversight committee looking at how the election was conducted in Michigan and trying to find ways we can improve moving forward,” Hall said.

“What we’re trying to do is look into these allegations, to bring things to light that happened and to look forward to future elections, improving laws on the books so they run smoother and we can restore public confidence,” he added.