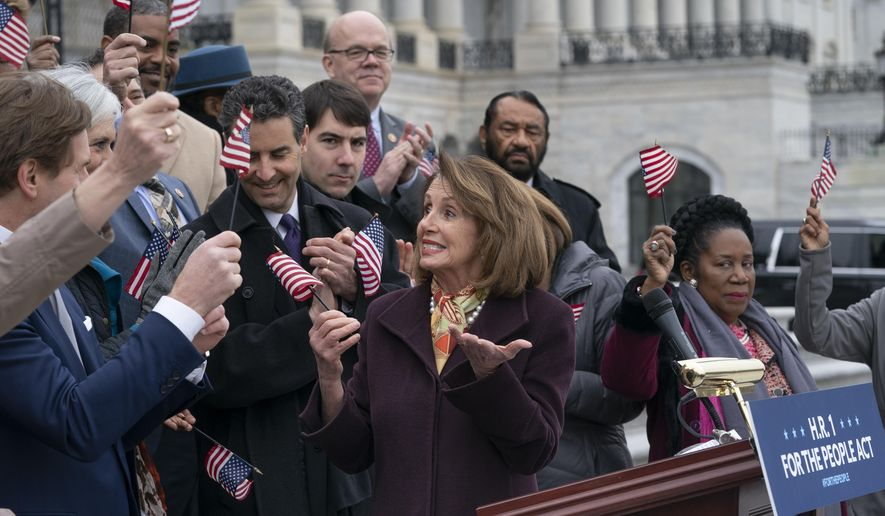 Speaker of the House Nancy Pelosi, D-Calif., and House Democrats rally ahead of passage of H.R. 1, "The For the People Act,"  (AP Photo/J. Scott Applewhite)

Joe Biden will become president on Jan. 20, and his administration is taking shape. But it will be a shared presidency.

To win the support of Democratic activists — the foot soldiers in both the mass protests that raged across the country and the Bernie Sanders presidential campaign — Mr. Biden agreed to adopt much of the left’s socialist agenda.

Indeed, the administration may be his in name only. Mr. Biden will be under pressure from Democratic congressional leaders, most importantly House Speaker Nancy Pelosi, the extreme liberal from San Francisco, to back their radical agenda. Beyond his prime when taking office, Mr. Biden is not expected to run for reelection and will be a lame duck from day one. In fact, many observers believe Vice President-elect Kamala Harris, another far-left liberal from California, will effectively control the administration — which will push its agenda further left.

At the top on the Democrats’ priority list is not raising the minimum wage, gutting the military or forced health care for all. Nope. Their first priority is rigging elections. So, if you thought the 2020 election season was a nightmare, then you are really not going to approve of the Democratic plan to turn that debacle into a never-ending reality.

The title of H.R. 1, dubbed “For the People Act” (the Senate companion measure is S. 949.) reminds one of the Orwellian double speak, “War is Peace, Freedom is Slavery.” It ought to be called, “For the Democrats Act.”

H.R. 1 a monster initially coming in at 622 pages when first introduced — would remake the American political system to ensure “progressive” victories for years to come.

Its designation as number 1 demonstrated its importance to the Democratic leadership. Of course, with Donald Trump as president it was doomed to fail. However, come January the political situation will be very different.

Explained Mr. Biden: “A first priority of a Biden Administration will be to lead on a comprehensive set of reforms like those reflected in the For the People Act (H.R. 1) to end special interest control of Washington and protect the voice and vote of every American.”

Again, more liberal double-speak: the complex legislation would impose progressive control in Washington and override the interests of all Americans. Many provisions would harm the public and our democracy. Among the four worst ideas:

1. Force Americans to support opposing candidates by creating a system of government financing for campaigns.

H.R. 1 includes public funding, long a favorite of the left. The federal government would provide a six-to-one “match” for smaller private contributions to candidates. A congressional candidate could get up to $5 million in public money. Forcing Americans to underwrite views they oppose is an unfair and inappropriate use of their tax dollars. Candidates unable to find private support should not be able to conscript other people’s money for their campaigns.

2. Override state election authority by mandating a plethora of procedures that would increase opportunities for vote fraud.

H.R. 1 also imposes a potpourri of other partisan favorites, such as registering 16-year-olds and forcing states to allow convicted felons to vote. Whatever the merits of such ideas, they should be left up to states. The federal government’s constitutional power to set standards is not absolute. It is one thing for Washington to impose a few fundamental principles for voting nationwide. It is quite another to micromanage the process and impose what amount to special interest favors.

4. Making Election Day a holiday for federal employees, while encouraging private companies to do the same.

For more than two centuries the American people have done their civic duty without public reward. Taxpayers should not be expected to pay for a day’s work so a federal worker can vote. Nor should private employers be forced to foot the bill for their employees. If a state finds that some people have trouble finding the time to vote, it could keep the polls open longer.

The underlying principle of election reform is one all Americans should embrace. It is the specifics that are in dispute. Which is why Senate Majority Leader Mitch McConnell rejected the omnibus bill but said that he would consider individual provisions. He specifically suggested a ban on ballot harvesting. Other potentially bipartisan ideas include toughening restrictions on foreign financing and slowing the famed revolving door. However, Democrats have shown no interest in abandoning the provisions drafted for their benefit. Their objective is to forever win, not clean up elections.

Moreover, victory on H.R 1 would be merely the start. The left also is campaigning to kill the Senate filibuster. Then a bare congressional majority could create new states, adding reliable Democratic House and Senate votes, pack the U.s. Supreme Court with judicial activists ready to remake the U.S. Constitution, and engage in social engineering on a massive scale, with no legal or political constraint. Relaxing election security would reinforce this process.

H.R. 1 is the ultimate legislative Trojan Horse, presented in the name of the democratic process while designed to subvert the underlying democratic republic. Following nearly a year of changing election rules, and a grassroots “Stop the Steal” campaign, it is more important than ever to protect the integrity of elections.

For this reason conservatives and moderate Democrats — fooled and bullied into supporting measures such as “Defund the Police,” should unite in opposition to H.R. 1. Passing this awful measure will lead to more cynicism, civil unrest and an uncertain future for our republic.