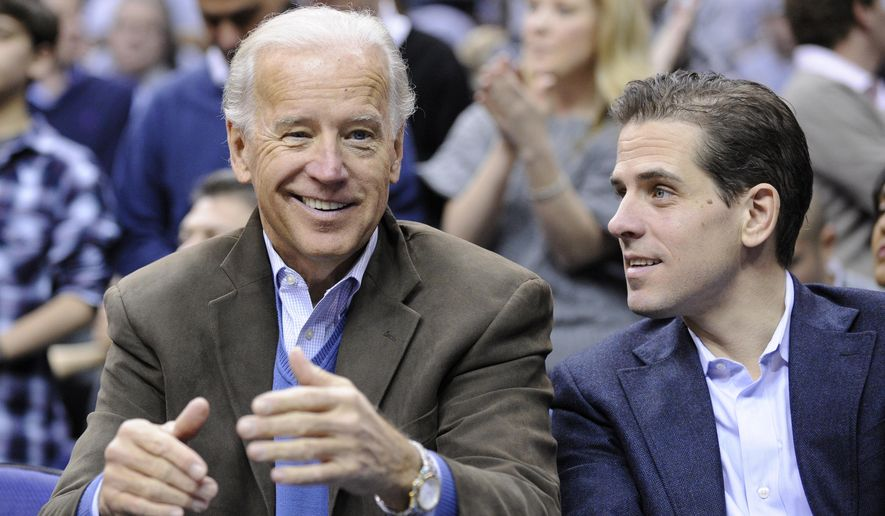 When Hunter Biden’s laptop contents burst open in the conservative press in October, an influential Washington group rushed to the aid of his dad, now-presumptive President-elect Joseph R. Biden.

Retired U.S. intelligence officials became political activists, directly injecting their credentials into the presidential campaign. They signed an open letter asserting that text messages about Hunter Biden’s cash flow from Ukraine and China, and how his father helped were a Russian plot.

There was no evidence of a Russia-laptop link, but the claim provided Democrats and the liberal media a counternarrative to ignore the entire scandalous storyline of Biden influence peddling.

“The politicization of the intelligence community, and IC retirees emboldened to pile on any anti-Trump movement, is a novel and dangerous development in American politics,” retired CIA clandestine officer Kent Clizbe told The Washington Times. “The genie’s out of the bottle.”

It was not the first time the intelligence community — retired and active members of the FBI, the CIA, the Office of the Director of National Intelligence (DNI) and other agencies — tried to sabotage President Trump. Leaks, spying and false claims hamstrung the Trump White House for four years.

“Intel leaders act like this in banana republics, not in democracies,” said a congressional Republican staffer. “At least until Trump was elected.”

“Let me tell you, you take on the intelligence community, they have six ways from Sunday at getting back at you,” Mr. Schumer said on MSNBC. “So even for a practical, supposedly hard-nosed businessman, he’s being really dumb to do this.”

Some of the ways the intelligence community used its power against Mr. Trump:

• An August 2016 intelligence “defensive briefing” on foreign threats was disguised by the FBI’s Crossfire Hurricane team as a chance to investigate candidate Trump, an internal memo shows. Intelligence never alerted him about the Kremlin’s computer hacking campaign against Democratic presidential nominee Hillary Clinton.

• FBI Director James B. Comey chose to brief President-elect Trump on the now-discredited Christopher Steele dossier, but never told him the allegations against him came from a partisan Democratic operation. Mr. Comey left his one-on-one meeting with Mr. Trump and went straight to the New York FBI field office to brief Crossfire Hurricane.

The Comey meeting leaked immediately to the news media, causing turmoil for Mr. Trump and his transition team.

• The FBI received intelligence in January 2017 that the dossier was part of Kremlin disinformation targeting Mr. Trump but never shared the information.

• Obama administration intelligence sources leaked damaging, inaccurate “scoops,” such as The New York Times story that the National Security Agency owned a substantial number of communications intercepts between the Trump campaign and Kremlin intelligence. Mr. Comey and Crossfire Hurricane leader Peter Strzok both have said such intercepts did not exist.

• Fired FBI Deputy Director Andrew McCabe took the extraordinary step of opening a counterintelligence investigation into the president after he had dismissed Mr. Comey. To this day, Mr. McCabe, now a CNN analyst, invokes innuendo that Mr. Trump is a Russian agent.

Among the Justice Department and congressional investigations on Russian interference in the 2015 election, no report has said Mr. Trump was a Russian asset.

• Mr. Brennan told CNN viewers that many Trump associates would be indicted for Russian election collusion. None was.

• Mr. Clapper gave credence to the dossier in October 2017 during one of his numerous CNN appearances. Responding to Mr. Trump’s assertion it was “fake,” Mr. Clapper said, “I don’t think that is an accurate characterization for the entirety of the dossier.”

Financed by the Clinton campaign and the Democratic Party, the dossier was compiled by Mr. Steele, a former British intelligence officer in London. He relied greatly on Russian-born Igor Danchenko, who debriefed friends in Moscow. The FBI concluded that the dossier’s dozen or so claims against Trump allies were inaccurate. Republicans consider the dossier one of the great hoaxes in American politics.

• Mr. Comey and Mr. McCabe insisted the unfounded dossier be included in the January 2017 intelligence community official report on Russian election interference. Dossier material ended up in the report’s appendix. It listed the most serious unproven claims against Mr. Trump.

With weeks to go before they left office, an unusual number of Obama administration officials, 39, requested that Mr. Flynn’s name be “unmasked” in intelligence reports from the National Security Agency.

Then came the open Oct. 19 pro-Biden letter by more than 50 former intelligence officials, first reported by Politico. They wrote, without any specific evidence, that the Hunter Biden laptop “has all the classic earmarks of a Russian information operation.”

Delivered as a political gift, candidate Biden cited this unproven allegation, as did Rep. Adam B. Schiff, California Democrat and chairman of the House Permanent Select Committee on Intelligence. In 2017, Mr. Schiff embraced the discredited Steele dossier as a way to bring down Mr. Trump.

History has not vindicated the group and its letter. DNI John Ratcliffe asserted there was no such evidence of Russian involvement. He was backed up by the FBI, who had seized Hunter Biden’s MacBook Pro at a repair shop in Wilmington, Delaware.

Recipients and senders on Hunter Biden’s text messages and email chains either confirmed their authenticity or stayed silent. No Biden family member has challenged the communications’ authenticity.

The story as presented by The New York Post, which obtained the laptop hard drive from Trump attorney Rudolph W. Giuliani, and by other media reports has survived scrutiny.

Hunter Biden, who used illegal drugs and at the time had found out that he had fathered a child with an exotic dancer, was breaking up with his brother’s widow, and was revealed to have left a cocaine pipe and his driver’s license in a rental car. He apparently forgot about the laptop he had left for repairs in 2019. The shop owner said Mr. Biden did not respond to calls to pick it up. Alarmed by its contents, he shared the drive with the FBI and Mr. Giuliani.

In sum, the messages showed that Hunter Biden was deeply involved in business deals with wealthy, shady operators, such as Chinese communist-linked tycoon Ye Jianming, who Beijing accused of corruption in 2018 and disappeared. One message showed that after Hunter Biden had won a lucrative spot on the board of a corrupted Ukrainian energy firm, a company executive thanked him for setting up a meeting with then-Vice President Biden.

What’s more, they showed that Joseph R. Biden was well aware of his son’s foreign business entanglements. He repeatedly has said he has never spoken with Hunter about any of his dealings.

In one message, including Hunter Biden, former partner Tony Bobulinski and other partners, there was a discussion of cutting in the elder Biden with a 10% stake in a new Chinese-funded investment firm. He was referred to as “the big guy.”

Besides the laptop, there is other evidence of Hunter Biden’s dealings with corrupt people. Treasury Department suspicious activity reports showed that he received millions of dollars from a Russian oligarch close to President Vladimir Putin, a Ukrainian oligarch, a Kazakhstan oligarch and Chinese interests.

The Senate report on suspicious bank tries gained new relevance on Dec. 9. Hunter Biden issued a statement saying the U.S. attorney for Delaware has informed him that he is under criminal investigation for possible income tax fraud. NBC News cited an email that suggests part of the probe deals with not disclosing $400,000 in income from Ukraine.

Said Mr. Clizbe, the former CIA officer: “Never before the Trump administration have we seen retired IC officers applying their political skills, lining up to do it, clamoring to do it, in the battleground of national partisan politics.”

One Russia probe figure who believes the U.S. intelligence community tried to ruin her life is Svetlana Lokhova.

Three years later, as Trump-Russia conspiracies captured the U.S. news media, the Russian-born Ms. Lokhova suddenly found herself the subject of news stories, They said she had done something inappropriate, but not specified, with Mr. Flynn at the dinner.

The press now had a new Russian nexus with which to go after Mr. Flynn, who at the time was under FBI investigation.

The news reports were not true. A concealed FBI document flushed out by Attorney General William P. Barr showed Mr. Flynn was cleared on Jan. 4, 2017, of any inappropriate conduct with a foreign contact. And Ms. Lokhova says the redacted document also exonerates her.

She says she knows where the bogus tale came from — the FBI’s own counterintelligence source, Washington national security figure Stefan Halper. She has said so in a lawsuit filed in Virginia against the news media. Its dismissal is now on appeal. News stories in 2017 said that a confidential source at Cambridge was the person upset by Mr. Flynn’s supposed conduct.

Ms. Lokhova went on to write a book about the ordeal, “Spygate Exposed: The Conspiracy to Topple President Trump.”

The book continues: “After the 2016 Presidential election political opponents attempted to unseat the elected US President Donald J. Trump. The plotters, among them some of the former leadership of Obama’s intelligence community used information they knew was false and supplied to them by a man with links to an ‘obviously unethical if not criminal spying operation during the 1980 presidential campaign.’”

The quoted remarks are from left-leaning journalist Glenn Greenwald. The reference was to Mr. Halper and his past government work. He has denied any wrongdoing.

Ms. Lokhova told The Washington Times in July: “The evidence shows the FBI is paying a known liar. I’m interested in why the U.S. government allowed this known liar and paid him and sent him to the United Kingdom to ruin my life.”

When Mr. Comey appeared before the Senate Judiciary Committee on Sept 30, he provided a full-throated defense of the FBI’s Crossfire Hurricane.

Posted by theodore miraldi at 12:54 PM