Radio host: 'Safeguards that were in place in Pennsylvania for decades were removed' 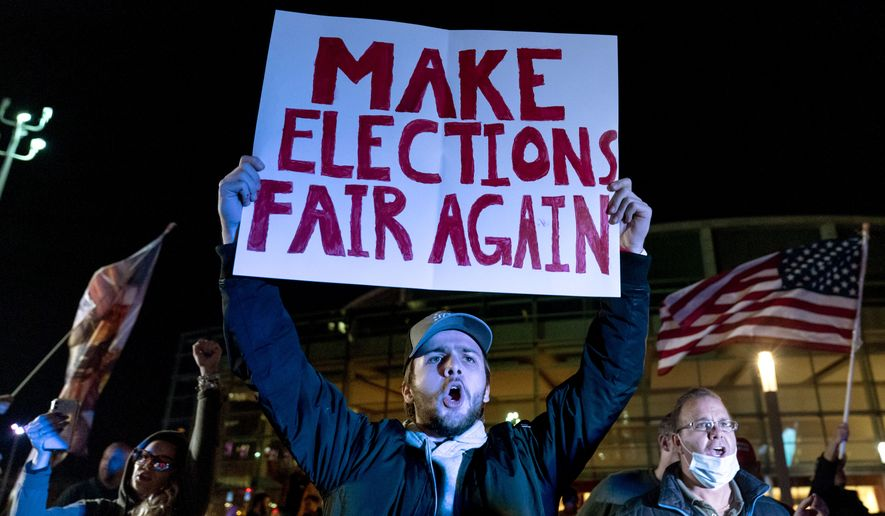 A supporter of President Donald Trump chants during a protest against the election results outside the central counting board at the TCF Center in Detroit, Nov. 5, 2020. (AP Photo/David Goldman) ** FILE **

Mark Levin said U.S. courts are “ducking left and right” when it comes to 2020 election lawsuits despite the Democratic Party’s attempts to “turn the whole country into California where Republicans can’t win anything statewide.”

The host of Fox’s “Life, Liberty & Levin” warned his audience over the weekend that shrinking from debates regarding President Trump‘s election lawsuits is not an option since everything the Founding Fathers fought for is at stake.

“It’s a very serious situation that we’re in today,” he said Sunday. “Look at this election. You have people saying, ‘they don’t have any legal cases.’ You have courts ducking left and right. The Democrats went into these states with a plan. The plan was to destroy the safety and security measures in virtually every state, but particularly the battleground states. What they did in Pennsylvania is a disgrace. … They eliminated signature requirements, postal date requirements, extended voting periods. In other words, those safeguards that were in place in Pennsylvania for decades were removed. Now, why would the Democrats want to remove them? To institutionalize corruption and fraud.”

Mr. Levin warned viewers that throwing in the towel would be a political boon for those who seek to surreptitiously dismantle the nation from within.

“You can go through the various states and you can see the Democrat Party, the Biden campaign and their lawyers, state by state, went into these areas for the purpose not of strengthening the vote, strengthening safety to ensure the people who are voting should be voting, but the opposite,” the conservative radio host continued. “Now, why would a political party do that? Why would a political party want to eliminate the safeguards to the franchise? The reason is to institutionalize fraud.”

The commentary comes as Mr. Trump and his campaign attempt to traverse a legal minefield. He insists that widespread voter fraud in swing states turned a seemingly decisive win near midnight on Election Day into a faux victory for presumptive President-elect Joseph R. Biden the next morning.

“That’s why litigation is taking place,” Mr. Levin continued. “That’s why people are trying to figure out what happened here. And that’s why people like me are not just going to give up and roll over for the rest of time when they turn the whole country into California where Republicans can’t win anything statewide. … [Democrats] intend to fundamentally alter our constitutional system by destroying our judiciary, destroying the Senate, destroying the legislative process with the filibuster rule, and once and for all destroying our voting system. … [There’s] so much power-hungry, ends-justify-the-means activity going on that it is frightening.”