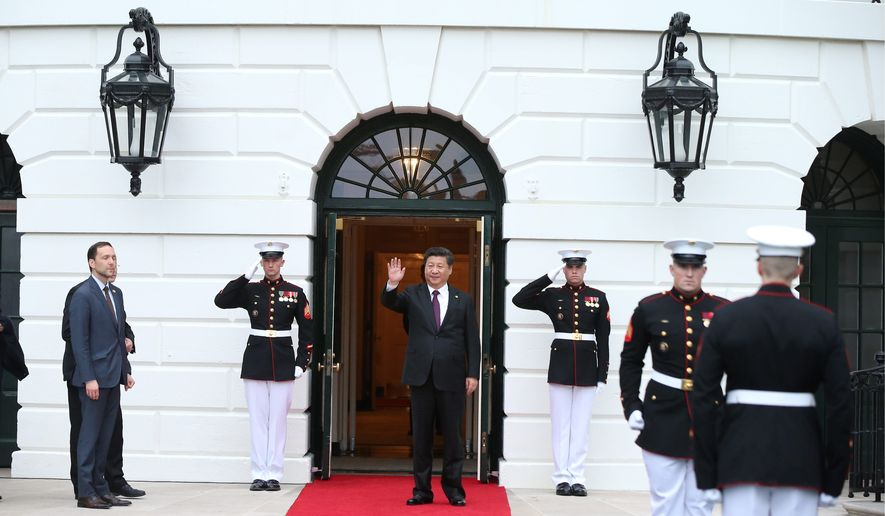 China influenced American policies for decades through a covert network of “old friends” — sympathizers and agents — who had penetrated the highest levels of the U.S. government and financial institutions before the Trump administration, according to an academic linked to the Chinese government.

On influencing the United States, Mr. Di said, he could not provide further details about the work of Chinese agents without compromising their identities. However, he said President Trump’s trade war with China upset decades of close ties between Washington and Beijing that the agent network facilitated.

Disputes such as the Navy’s EP-3 midair collision with a Chinese jet in the western Pacific in 2001 and the mistaken U.S. bombing of the Chinese Embassy in Serbia in 1999 were resolved within months because of the influence operations.

“Now, I’m going to drop a bomb: Because we had people up there inside America’s core circle of power, we had our old friends,” said Mr. Di, adding that he needed to speak carefully because “I can’t sell out these people.”

A video of the remarks was posted on Mr. Di’s Weibo social media account but was quickly removed. Copies of the video, however, survived and went viral.

Mr. Di could not be reached for comment. The university’s Contemporary China Studies Program, where Mr. Di works, had no immediate comment.

“The intelligence is clear,” Director of National Intelligence John Ratcliffe said in a published article. “Beijing intends to dominate the U.S. and the rest of the planet economically, militarily and technologically. There are no moral or ethical boundaries to their pursuit of power.”

“We’ve also seen an uptick, which was planned and we predicted, that China would now re-vector their influence campaigns to the new administration,” he said.

In 2013, the State Department sponsored him to give lectures on Sino-U.S. economic relations to senior U.S. officials. Wall Street hedge funds have invited him “to teach company executives the impact of China’s reforms on global financial markets,” according to his biography.

In his remarks last month in Shanghai, Mr. Di explained how one of these agents, whom he described in anti-Semitic terms, successfully pressured the owner of the Politics and Prose bookstore in Washington in 2015 into permitting a Chinese government official to hold an event unveiling a book by Chinese President Xi Jinping.

China’s propaganda department tasked Mr. Di with arranging the book event and hosting and participating in a panel discussion.

“Just like today, they said, ‘Hey, Di Dongsheng, you are very good at fooling the foreigners,’ because they had seen how I conned them, which they thought was very effective,” he said.

Mr. Di said it was difficult to arrange the event on short notice and bookstore owner Bradley Graham refused to give in to the Chinese demands.

“So I asked him, ‘Which author booked the place for that time frame?’ What did I mean by asking him that? Well, there is nothing U.S. dollars can’t buy. If one bundle of cash couldn’t, I’d throw in another. That’s how I work,” he said.

“We didn’t feel pressured to host it and did so in the spirit of improving U.S.-China relations,” said Mr. Graham, co-owner of Politics and Prose.

“We set conditions for how the event was to unfold, conditions that Chinese representatives then proceeded to violate,” he said. “All in all, it was a very unpleasant and disappointing experience that has made us wary of ever taking Chinese authorities at their word again.

Mr. Di said the bookstore owner refused to tell him as a matter of principle which author was scheduled for the time frame he requested and described him as arrogant and pretentious and having “some opinions on our party, which is why he deliberately refused to play along.”

The problem was reported to senior Chinese Communist Party officials, and a deputy director of the propaganda department notified him that the problem had been solved, he said.

The bookstore identified the official who spoke at the book event as Guo Weimin, deputy director of the Chinese State Council Information Office.

“The reason why we could go as planned was because a hero had helped us out. [The CCP official] introduced me to an old lady with a big nose, obviously a Jew simply by that look,” Mr. Di said.

The woman, who was not identified by name, said she was a Chinese citizen, had lived in China and spoke perfect Mandarin.

“I suddenly realized she is one of the Chinese people’s ‘old friends,’” Mr. Di said.

“I asked her how she managed to force him to comply,” he said. “The old lady cunningly grinned, ‘I reasoned with him.’ Do you know where that phrase came from? It’s a famous line from the Mafia movie ‘The Godfather,’ in which they cut the horse head off and stick it in someone’s bed. Of course, she is not Mafia.”

Mr. Di said the woman was in charge of Asian operations for a major Wall Street financial institution.

“In plain and simple language, during the last three to four decades, we used the core circle inside America’s real power,” he said. “As I said, the Wall Street had a very profound influence over America’s domestic and foreign affairs since the 1970s. We used to heavily rely on them.”

However, after Mr. Trump was elected in 2016, “Wall Street couldn’t control Trump, because, awkwardly, there was a soft breach of contract between them, which made them hostile to each other,” he said.

However, Mr. Di said once the Biden administration takes control, China will have renewed its connections.

“Now with Biden winning the election, the traditional elites, political elites, the establishment, they have a very close relationship with the Wall Street,” he said.

On Mr. Trump’s comments that Hunter Biden has financial interests around the world, Mr. Di said: “But who helped Biden’s son build his global companies? You understand? There are indeed buy-and-sell transactions involved in here. So I think at this particular time [after Biden won the election], it is of strategic and tactical value for us to show goodwill [to Mr. Biden]. Of course, this is just from my limited perspective as a political economist.”

Hunter Biden’s business dealings prompted the presumptive president-elect to announce last week that he would avoid all conflicts of interest once in office.

China expert Gordon Chang said, “Di Dongsheng’s comments show the breathtaking arrogance of the Chinese elite, which now has no hesitation about expressing in public its belief that with a President Biden, China will once again control the highest levels in Washington.”

Posted by theodore miraldi at 1:16 PM