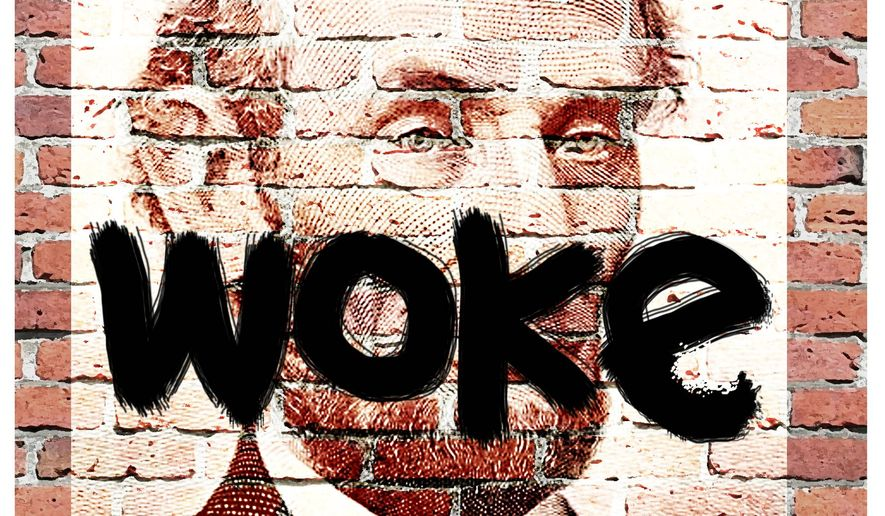 It may be Christmastime, but our ruling elites are keeping up their campaign of cultural cleansing.

Not even Honest Abe is safe.

In San Francisco, a committee tasked to rid the school system of now-disgraced public figures at 44 sites says that a high school named after Abraham Lincoln, who freed the slaves and held America together through the Civil War, ought to drop the Great Emancipator.

“Lincoln, like the presidents before him and most after, did not show through policy or rhetoric that Black lives ever mattered to them outside of human capital and as casualties of wealth building,” explained first-grade teacher Jeremiah Jeffries, chairman of the renaming committee.

Others slated for the memory hole include George Washington, Thomas Jefferson, Paul Revere, both Roosevelts, Francis Scott Key, James Garfield, William McKinley, James Monroe, John Muir, Junipero Serra and even Dianne Feinstein, whose sin was to replace a vandalized Confederate flag in a historic display of 18 flags in front of City Hall when she was mayor back in the 1980s.

You just can’t be too “woke” at a time when Marxists are toppling statues and demanding race-based reparations and Mao-style re-education sessions.

On Dec. 12, after a daytime Trump rally, some idiots with the Proud Boys tore down a Black Lives Matter banner at D.C.’s Metropolitan African Methodist Episcopal Church and at Asbury United Methodist Church, setting at least one on fire.

Not one to let a crisis go to waste, the AMEC church’s pastor, William H. Lamar IV, who is steeped in Black liberation theology, took to The Washington Post last Wednesday to bash America, and White Americans in particular.

“The myth of the American imperium is deeply rooted in falsehoods and forgetfulness,” he wrote in a piece titled “Will America finally abandon its racist myth?”

The Post placed it in the middle three columns at the top of its op-ed page, under a photo of a self-hating “woke” apparently White woman wearing a Black Lives Matter shirt and holding a sign saying “White Supremacy Will be Defeated.”

Mr. Lamar went on, “Liberty was not the founding American impulse; genocide was. The blessing of God did not secure this nation’s prosperity. The forced labor of my ancestors did.” For a man of the cloth to shove God to the back seat of history takes a special kind of chutzpah.

His screed was right out of The New York Times’ 1619 Project, designed by Marxists to teach Americans to despise their own country and yearn for a socialist utopia in which White people apparently either disappear or are treated like India’s ‘untouchables.’

Ripping down and destroying banners on private property is a noxious crime for which the perps should face appropriate punishment. But that’s not enough for Mr. Lamar, who indicts all Americans.

“The mythology that motivated the perpetrators was the underbelly of the American narrative — that White men can employ violence to take what they want and do what they want and call that criminality justice, freedom and liberty,” he wrote.

It’s a shame that Mr. Lamar’s church lost its BLM banner, but it appears he didn’t lose any sleep over the earlier burning of the church across from the White House by leftist demonstrators or the months of race riots that claimed mostly Black victims.

It didn’t fit the prevailing media narrative that only White suburbanites are capable of evil deeds.

All over the spectrum, things are getting nuttier in the name of wokeness. Cleveland’s Major League Baseball team, which jettisoned its goofy Chief Wahoo mascot in 2019, is deep-sixing “Indians,” which this team has proudly sported since 1915.

No new name has been announced, but officials said the 2021 team would be “non-Native American.” Who knew that rooting for a team and admiring its players could be construed as hating their namesakes? That would certainly be news to fans of the Braves, the Fighting Irish, the Vikings and the Cowboys.

Cleveland is following in the moccasins of the National Football League team formerly known as the Washington Redskins. This year, the club didn’t bother adopting a new moniker and is simply playing as the Washington Football Team. As a longtime fan, I’m thankful that owner Dan Snyder has reportedly dismissed out of hand renaming his team the Swamp Rats and is holding out for something more uplifting.

But getting back to Cleveland, the Christian satirical site Babylon Bee summarized the situation this way:

“Due to mounting pressure from a growing consensus of 12 people on Twitter and The New York Times, the Cleveland Indians have finally chosen to change their team’s name. … [T]he owners finally settled on the highly non-offensive title ‘Cleveland Genderless Sports Players With No Discernable Racial Features Or Specific Ethnic Background.’” Yay, team!

If Cleveland fans think this will get them out of trouble, they had better think again. Their NFL team is still named the Browns.

Posted by theodore miraldi at 12:34 PM