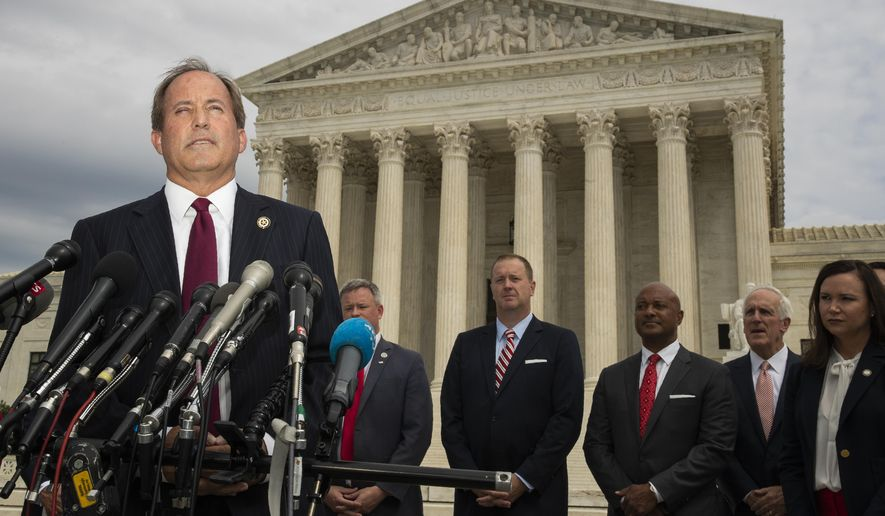 Texas Attorney General Ken Paxton’s motion is seeking to have the high court order the legislatures of those four states to choose presidential electors, presumably for President Trump. He said election irregularities in the states “cumulatively preclude knowing who legitimately won the 2020 election and threaten to cloud all future elections.”

“This means Texas will have original jurisdiction to go directly to the Supreme Court!!” she said.

The Texas complaint argues that the other states violated the Electors Clause of the Constitution by making changes to voting rules and procedures through the courts or through executive actions, rather than through their state legislatures.

Texas also argues that its own votes in the presidential election were “debased” by the illegal actions of the other states.

“Certain officials in the defendant states presented the pandemic as the justification for ignoring state laws regarding absentee and mail-in voting,” the complaint says. “The defendant states flooded their citizenry with tens of millions of ballot applications and ballots in derogation of statutory controls as to how they are lawfully received, evaluated, and counted. Whether well-intentioned or not, these unconstitutional acts had the same uniform effect—they made the 2020 election less secure in the Defendant States.”

Mr. Paxton said the Electors Clause of the U.S. Constitution requires that only state legislatures may set the rules governing the appointment of electors, and “cannot be delegated to local officials.”

“Trust in the integrity of our election processes is sacrosanct and binds our citizenry and the States in this Union together,” Mr. Paxton said in a statement.

“Georgia, Michigan, Pennsylvania and Wisconsin destroyed that trust and compromised the security and integrity of the 2020 election. The states violated statutes enacted by their duly elected legislatures, thereby violating the Constitution. By ignoring both state and federal law, these states have not only tainted the integrity of their own citizens’ vote, but of Texas and every other state that held lawful elections. Their failure to abide by the rule of law casts a dark shadow of doubt over the outcome of the entire election. We now ask that the Supreme Court step in to correct this egregious error.”

Iowa law school professor Derek Muller, a specialist in election law, said the action by Texas against other states’ presidential electors is rare but not unprecedented.

He said in 1966, Delaware challenged New York’s “winner-take-all method of awarding electors.” But the Supreme Court rejected the case without comment, he said.

Ilya Shapiro, the publisher of the Cato Institute’s Supreme Court Review, said Texas’ lawsuit wasn’t “as bad as” some of the other election challenges that have been filed, but he still said it was “frivolous.”

“Even the state’s theory of standing is dubious. Note that the Texas solicitor general, whose job it is to represent the state before the Supreme Court, didn’t sign the filing; Paxton had to hire a “special counsel,” Mr. Shapiro said.

Josh Blackman, a professor at South Texas College of Law, said the case was perplexing and likely had a zero percent chance of success.

“I am not aware of a state suing other states in the Supreme Court’s original jurisdiction to challenge the election results,” Mr. Blackman said.

Posted by theodore miraldi at 11:54 AM