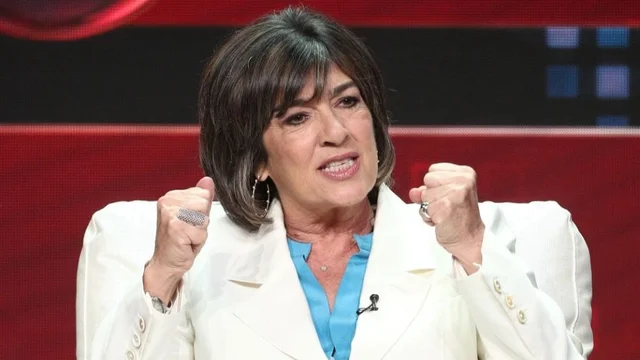 “It’s time to put away the harsh rhetoric, to lower the temperature, to see each other again, to listen to each other again. To make progress, we must stop treating our opponents as our enemy. We are not enemies. We are Americans.”

So said President-elect Joe Biden in his victory speech.

So you might think that, with Donald Trump on his way out, liberal journalists finally would ease up on Trump, just a bit. But because he has refused to concede — and because of other perceived sins — CNN and PBS journalist Christiane Amanpour took a parting shot and did what so many on the left have done, many times before: She compared Trump to Adolf Hitler.

“This week, 82 years ago, Kristallnacht happened,” she said on “Amanpour & Co,” her PBS show. “It was the Nazis’ warning shot across the bow of our human civilization that led to genocide against a whole identity. And, in that tower of burning books, it led to an attack on fact, knowledge, history and truth. After four years of a modern-day assault on those same values by Donald Trump, the Biden/Harris team pledges a return to norms, including the truth.”

When her observations kicked up the predictable storm on social media, Amanpour went back on television to clean up the mess she had caused. “Hitler and his evil stand alone in history,” she told her audience.

Thank you, Christiane, for telling us what we already knew.

Then she said: “I regret any pain that my statement may have caused. My point was to say how democracy can potentially slip away and how we must always zealously guard our democratic values.”

Count me in for that. I mean, who isn’t for guarding our democratic values? Unfortunately, that’s not a rhetorical question … because while Amanpour was fretting over Trump’s supposed disdain for democratic values, she apparently didn’t notice that some supposedly open-minded, tolerant liberals were doing their best to make him look like a civil libertarian, at least by comparison.

For openers, there’s Congresswoman Alexandria Ocasio-Cortez (D-N.Y.), who took to Twitter to ask this about anyone who ever worked for Trump’s administration: “Is anyone archiving these Trump sycophants for when they try to downplay or deny their complicity in the future?”

“Archiving”? That sure looks like a fancy word for an enemies list that could blacklist anyone who ever worked for the president.

Once it was liberals who yelled the loudest about President Nixon’s enemies list in the early 1970s, or Sen. Joseph McCarthy (D-Wis.) and his blacklist in the 1950s. Now it’s progressives like AOC who want to punish political adversaries for harboring the “wrong” ideas.

And how exactly did it plan to do that? “A critical part of making sure the nation never finds itself in this position again is to make sure those members of the Trump administration responsible for loosening the guardrails of our democracy are not rewarded with book deals, TV contracts, or six-figure salaries in the private sector based on that experience.”

In other words, the Trump Accountability Project wanted to restore democratic norms by cancelling anyone who worked for Donald Trump.

When Trump supporters took to social media to compare the organizers of the Trump Accountability Project to Stalin, Mao and Pol Pot, the organization folded. It cancelled itself.

There’s also the liberal Robert Reich, a former U.S. labor secretary and current University of California public policy professor, who wrote on Twitter of Trump’s four years in office: “When this nightmare is over, we need a Truth and Reconciliation Commission. It would erase Trump’s lies, comfort those who have been harmed by his hatefulness, and name every official, politician, executive, and media mogul whose greed and cowardice enabled this catastrophe.”

A Truth and Reconciliation Commission? Why not just send them to re-education camps?

Oh, wait, there’s more. We have now learned that the supposedly highly principled American Civil Liberties Union apparently is in favor of banning books that don’t conform to the accepted views of at least one of its lawyers, a transgender man named Chase Strangio. The ACLU and Mr. Strangio’s discontent involves a book by Abigail Shrier called “Irreversible Damage: The Transgender Craze Seducing Our Daughters.” In it, she makes the case that while adults should have the freedom to undergo medical transition, teenagers are a different matter.

In a Wall Street Journal op-ed, she wrote: “Social contagions exist, and teen girls are particularly susceptible to them. The book takes a hard look at whether the sudden spike in transgender identification among teen girls is yet another social contagion to befall girls who, in another era, might have fallen prey to anorexia or bulimia.”

You’d think that liberals — at the ACLU, of all places — would defend an author’s right to make her case, whether it agreed with that case or not. But not Chase Strangio, who serves as the ACLU’s deputy director for transgender justice. “Abigail Shrier’s book is a dangerous polemic with a goal of making people not trans,” he tweeted. “I think of all the times & ways I was told my transness wasn’t real & the daily toll it takes. We have to fight these ideas which are leading to the criminalization of trans life again.”

Then, just to make sure we understand what Mr. Strangio means when he says “we have to fight these ideas,” he goes on to say: “Stopping the circulation of this book and these ideas is 100% a hill I will die on.”

“You read that right,” Ms. Shrier wrote in her op-ed. “Some in today’s ACLU favor book banning.”

She goes on to tell us about a woman named Grace Lavery, a professor of English at the University of California, Berkeley, who tweeted: “I DO encourage followers to steal Abigail Shrier’s book and burn it on a pyre.”

A conservative friend of mine has long believed that if liberals and progressives could get away with it, they’d put all sorts of restrictions on free speech. He’s a very bright guy but I once thought he was a tad paranoid. I don’t anymore.

It’s good to know that Christiane Amanpour is concerned about democracy and democratic values.  Maybe in a future broadcast she’ll condemn the authoritarian tendencies of those on the left who are on a mission to crush all sorts of ideas that offend their sensibilities.

Posted by theodore miraldi at 1:04 PM