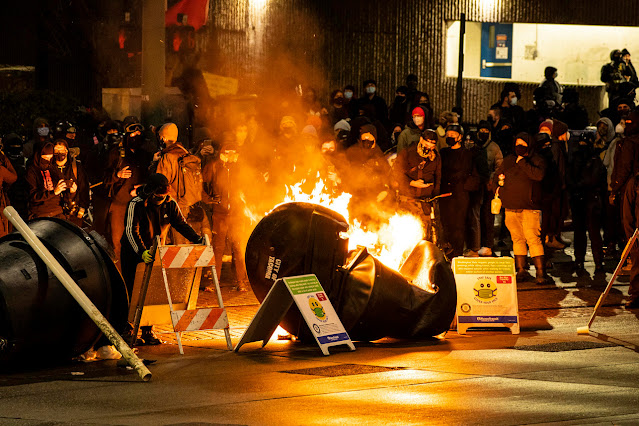 Antifa rioters started fires and trashed buildings in Tacoma, Washington, in outrage over viral video of a police officer driving his squad car through a crowd of illegal street racers.

Videos showed numerous fires and businesses smashed up late Sunday as more than 100 people took to the streets close to where the officer had sped through a crowd the previous night, running over at least one person.

At least two police cars were damaged during the rampage as some city buildings had to be evacuated, according to The News Tribune.

A cheering mob — dressed in all black and at one point seen toting a Antifacist Action flag — was also caught on video trying to pull away the gates protecting the Pierce County Jail, chanting “free them all.”

Tacoma police said they also busted two people trying to get onto the roof of an unspecified secure building — saying they were armed with a handgun, double-bladed knives and batons.

The pair — a 32-year-old man and 36-year-old woman — were wearing all black, tactical riot gear and ski masks, police told the News Tribune. A third suspect with them got away, police said. 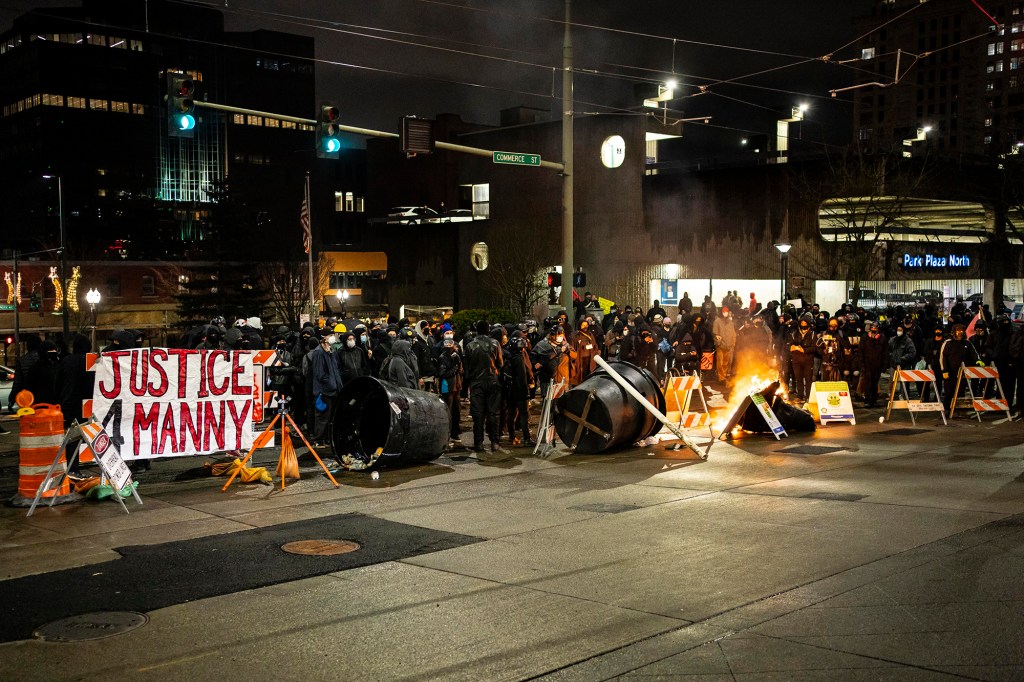 A barricade, with a banner referencing the 2020 death of Manuel Ellis in police custody, burns in an intersection in downtown Tacoma during an anti-police protest Getty Images

Local activists were angered at the destructions that they insisted was sparked by outsiders to the city, which is about 30 miles south of Seattle, one of the flashpoint cities for ongoing anti-police riots.

Local business owner Alexander Schelhammer, who said he has been “resisting” police and the city during previous peaceful protests, said he confronted some of the mob as they lit trash cans in the street.

“Somebody started lighting it on fire and I asked them ‘Yo, are you from here? Are you from Tacoma?’ He said, ‘No,'” Schelhammer told The News Tribune.

“Lighting a trashcan on fire in my city is not OK … No one from Tacoma lit that on fire.

“This protest isn’t being led by people on a megaphone from Tacoma,” Schelhammer said.

Initial reports suggested there were few arrests, with Sheriff Ed Troyer telling The News Tribune that he didn’t “want people or officers injured.”

“If we take out the main instigators ruining it for everyone else, it will ensure that it stays peaceful,” the sheriff said.

Tacoma police said the officer caught Saturday night in the now-viral video only sped through the crowd because he was “fearing for his safety” after being surrounded by a mob banging on his windows.

The 58-year-old patrol officer — who has been with the force almost 30 years — was placed on paid administrative leave during the ongoing investigation.

Video of the incident, which came as he tried to break up a group of street racers, was widely shared online and appeared to show at least one person being run over.

Both injured people went to hospitals with injuries not considered to be life-threatening. One person has since been released, local media said.

Protesters told news outlets they want the officer to be fired and criticized the city for what they said was a lack of transparency.