ARMED INSURRECTION: Congress Votes to Overturn the Next Election 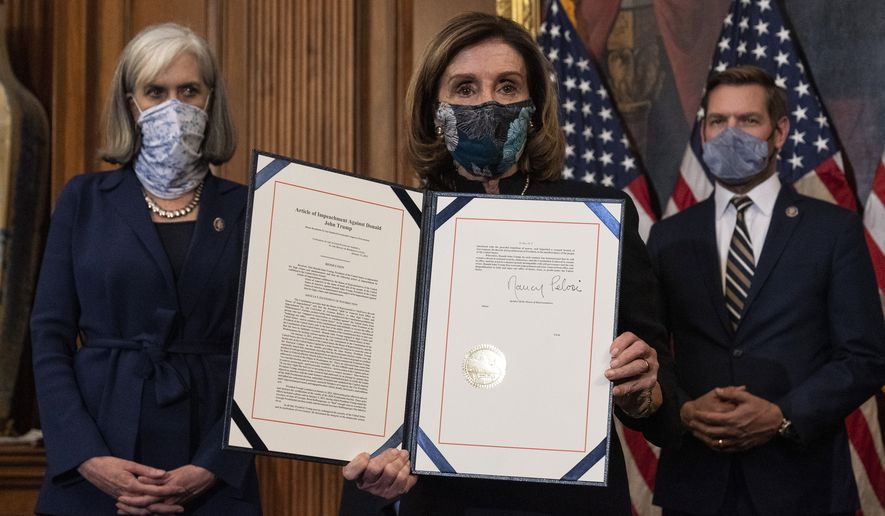 House Speaker Nancy Pelosi of Calif., holds the article of impeachment against President Donald Trump after signing it, in an engrossment ceremony before transmission to the Senate for trial on Capitol Hill, in Washington, Wednesday, Jan. 13, 2021. (AP Photo/Alex Brandon)

The last time these slinking mongrels in Congress impeached President Trump, a deadly disease from China was stalking our country, poised to pounce and kill close to 400,000 Americans.

In those crucial early months of the global pandemic, our federal government ground to a halt as Democrats in Congress pursued with blind fury a hotly partisan and clearly futile effort to remove Mr. Trump.

Democrats failed. Mr. Trump survived. Everyone knew the outcome of the fake charade from the start.

But as Democrats dawdled, bloviated and fawned for the cameras, the pandemic prevailed. If you want to know why Democrats are so hellbent on blaming the China virus on Mr. Trump, it is because the blood is actually on their hands.

Still, the pandemic rages. This time they all know it. Yet, still, they pursue Mr. Trump with an ISIS-like zealotry in an effort to remove Mr. Trump a few days before he leaves office anyway.

Truly, these are the most fundamentally dishonest and unserious people ever to hold elected office. They are a mockery of self-governance and precisely why Mr. Trump got elected in the first place.

You might say House Speaker Nancy Pelosi presides over a circus of untrained animals and diabolical clowns, but that would be an unkind insult to clowns and penned animals, frantically pacing back and forth, back and forth inside their confined cages.

“A lot of people have drank the poison of white supremacy and that’s what Donald Trump represents,” she said. “Just is.”

That’s right. There is the evidence. There lies the proof. Forget hearings. Forget a trial.

If you really want to stir up one of these impeachment fanatics, just ask them to point to the one single line in Mr. Trump’s speech from before the raid against the Capitol that “incited” the violence.

The reason they cannot hold hearings or hold a trial is because any such due process would prove that no such premeditated incitement of violence occurred.

If anything, it was unpremeditated incitement of peaceful protest — also known as our constitutional right to free speech, free assembly and the right to petition your government. Peacefully.

Among the clowns in Congress scrambling to shift blame for the mess they have made in Washington onto Mr. Trump are 10 Republicans in the House. One of them is Rep. Liz Cheney of Wyoming, who is in the chamber because her father, Dick Cheney, was vice president.

I guess we should be thankful that finally someone in the Cheney family has found an “armed insurrection” that they are not lustily in favor of. Maybe Ms. Cheney would have been more enthusiastic about this eruption of violence if more American soldiers had been killed or maimed and it had cost taxpayers $2 trillion.

Another impeachment zealot is Rep. Jim Clyburn, South Carolina Democrat. To his credit, at least he is honest about his motives.

“This president must be impeached and convicted,” he thundered. “And he must be prevented from ever attempting to seize power again.”

There you have it. This is not even about removing Mr. Trump from office in the final week of his presidency. It is all about preventing him from ever running for office again.

In other words, Congress is scrambling to overturn the next election before it even happens. They are desperate to deny American voters the right to elect Donald Trump again.

Talk about an insurrection.

No wonder Liz Cheney is so excited about it.

Posted by theodore miraldi at 4:59 PM