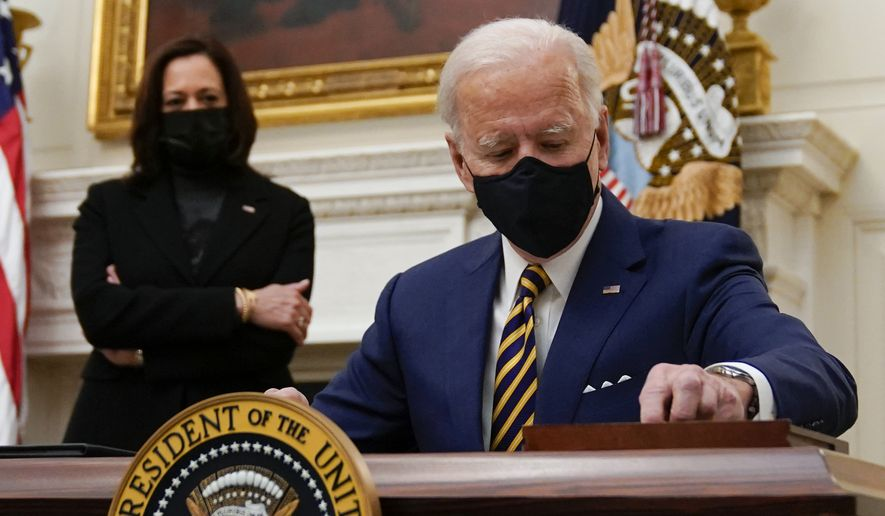 In a joint statement, Mr. Biden and Ms. Harris said that during “the past four years, reproductive health, including the right to choose, has been under relentless and extreme attack,” referring to the Trump administration’s strong pro-life record.

“The Biden-Harris Administration is committed to codifying Roe v. Wade and appointing judges that respect foundational precedents like Roe,” said the statement, adding that, “now is the time to rededicate ourselves to ensuring that all individuals have access to the health care they need.”

Already, the administration has signaled that it will overturn the Mexico City policy, the 1984 rule barring U.S. foreign-aid funding from supporting non-governmental organizations that “perform or actively promote abortion as a method of family planning.”

Dr. Anthony Fauci, the president’s chief medical advisor on the novel coronavirus, said Thursday in virtual remarks to the World Health Organization that the Biden administration would soon rescind the policy.

“To that end, President Biden will be revoking the Mexico City Policy in the coming days, as part of his broader commitment to protect women’s health and advance gender equality at home and around the world,” Dr. Fauci said in his prepared comments.

Calls to “codify” the 1973 Roe decision emerged during the Trump administration as pro-choice state legislators sought to enshrine into law and expand abortion rights, citing fears that the decision would be overturned by an increasingly conservative federal judiciary and Supreme Court.

“This week, Joe Biden took his hand off the Holy Bible at his swearing-in and within hours began a full out assault on women and human life as president,” said Concerned Women for America president Penny Nance. “It is only the beginning of his promised actions to erase women and force taxpayers to finance the killing of unborn babies, underscoring the dark consequences of this election.”

“Abortion isn’t healthcare,” she said. “It is heartbreaking but not surprising that on the day we commemorate the loss of 60+ million Americans to abortion the new administration is already aggressively leaning into abortion extremism.”

“Joe Biden marks the anniversary of Roe v Wade by saying he is ‘deeply committed’ to the intentional destruction of innocent life through the heinous practice of abortion,” said CatholicVote.

During the campaign, Mr. Biden also said he opposes the Hyde Amendment, which bars federal funding for most abortions, a switch from his previous decades of support.

Pro-choice advocates cheered the White House announcement, with Planned Parenthood Action saying that it feels “great to have champions for reproductive rights in the White House again! We’re excited for the work and progress ahead.”

Rep. Andy Biggs, Arizona Republican, reintroduced Friday three pro-life bills and predicted that the Biden administration will bring out the worst abortion policies and edicts that our nation has experienced since the Roe v. Wade decision.”

The March for Life announced Friday its list of speakers for the annual rally scheduled for Jan. 29, which will be held virtually over pandemic concerns.

Last year, then-President Trump became the first sitting president to speak in person at the March for Life. Previous Republican presidents had spoken remotely to the crowd at the event held annually in Washington, D.C.

In 2017, then-Vice President Mike Pence became the first sitting vice president to appear at the march, which he continued to do in subsequent years.

Posted by theodore miraldi at 10:24 AM