Democrats on Verge of Stunning SWEEP in Georgia Senate Runoffs 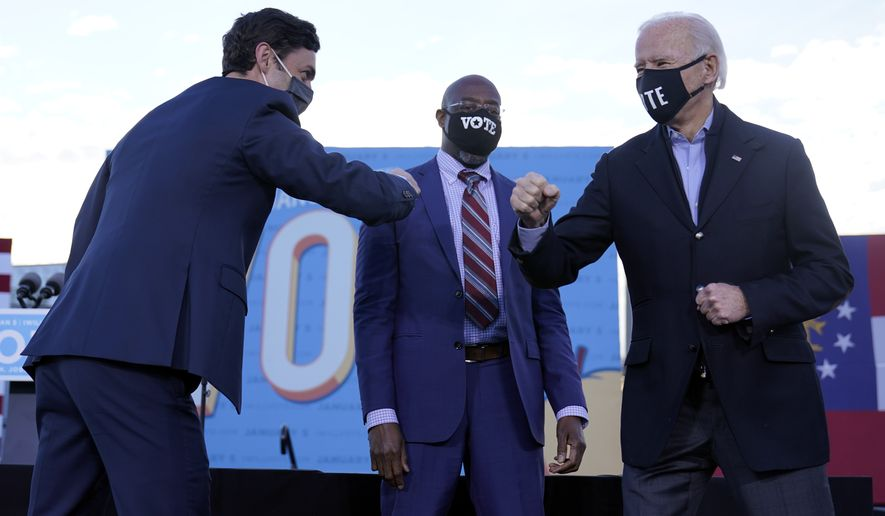 Democrats woke up Wednesday on the doorstep of pulling off a stunning sweep of two high-profile runoff races Tuesday in Georgia and flipping control of the U.S. Senate.

If the results hold up, they would give President-elect Joseph R. Biden more legislative wiggle room in Washington and leave the party faithful across the country elated over the prospect of taking the gavel away from Senate Majority Leader Mitch McConnell and delivering a parting shot at President Trump.

The contests marked a dramatic close to a chaotic election cycle that served as a referendum on Mr. Trump and would leave Democrats in charge of the White House and both chambers of Congress for the first time since 2010.

Shortly after midnight, Mr. Warnock claimed victory in his race, though Ms. Loeffler had given a speech saying the race wasn’t over.

“We were told that we couldn’t win this election,” Mr. Warnock said. “But tonight we proved that with hope, hard work and the people by our side, anything is possible.”

Mr. Warnock, who will become Georgia’s first Black U.S. senator, said he hopes his story will be an inspiration “to some young person who is trying to grasp and grab hold to the American Dream.”

While falling short of an emphatic victory claim, Mr. Ossoff‘s campaign said he expects to win too, though the race had not been projected as of 3 a.m.

“When all the votes are counted we fully expect that Jon Ossoff will have won this election to represent Georgia in the United States Senate. The outstanding vote is squarely in parts of the state where Jon‘s performance has been dominant,” campaign manager Ellen Foster said in a statement.

If Mr. Ossoff‘s lead holds up, the Senate will be split 50-50 and Vice President-elect Kamala D. Harris will hold the tie-breaking vote.

The contests played out as several GOP lawmakers on Capitol Hill planned to object Wednesday to accepting the results of the Electoral College presidential vote.

Mr. Perdue and Ms. Loeffler supported the push, which almost certainly will fail, signaling their allegiance to Mr. Trump and his insistence that Democrats stole the 2020 election.

It was part of a broader pattern of the two Georgia Republicans tying their fortunes to Mr. Trump. The nation’s 45th president headlined a rally for Mr. Perdue and Ms. Loeffler on Monday in the hopes of boosting their chances.

Mr. Trump also spent the last two months casting doubts over Mr. Biden’s victory in Georgia and elsewhere and attacking Gov. Brian Kemp and Secretary of State Brad Raffensperger, both Republicans, for not bowing to his demands.

As it became clear Democrats likely would flip both seats, Erick Erickson, a Georgia-based conservative commentator, said Mr. Trump made a mess of the elections.

“Folks, the election is not being stolen,” he wrote on Twitter. “The race is being lost by Republicans who think the race was stolen because mythology is more important than truth.”

Polls closed at 7 p.m. EST but the vote counting dragged on into Wednesday.Over that time, vote tallies swung back and forth.

Democrats jumped out to an early lead from the early and mail-in votes. Then Republicans closed the gap and led as their advantage in “day-of” voting took over. But Democrats ran back out in front as more votes trickled in from Democratic strongholds around Atlanta.

Mr. Trump suggested, without evidence, that shady actors could be manipulating the results throughout the day.

“Looks like they are setting up a big ‘voter dump’ against the Republican candidates,” Mr. Trump said. “Waiting to see how many votes they need?”

“The votes of everyone will be protected and counted,” Mr. Sterling said. “Sorry you received old intel, Mr. President.”

Election officials said there are as many as 17,000 outstanding military and overseas ballots that could be accepted through Friday.

Early exit polls found that 56% of voters believed that the 2020 election was aboveboard, but the responses broke heavily along partisan lines with 76% of Republicans saying the election was not conducted fairly.

Voters also were split over how elected leaders should respond to the coronavirus, with 52% saying they want to contain the virus, and 42% who were more interested in rebuilding the economy.

Mr. Perdue was running for a second term. Ms. Loeffler was appointed to her seat in 2019 after Sen. Johnny Isakson stepped down due to failing health.

Mr. Warnock now will fill out the remainder of his term, which runs through 2022. Mr. Ossoff, 33, would be the youngest member of the Senate.

The nightmare scenario for Republicans followed a week in which Mr. Trump dominated the headlines, hampering the GOP’s attempts to sound the alarm over a Democratic takeover of the Senate.

The biggest news splash came after audio emerged of a phone call in which Mr. Trump pressured Mr. Raffensperger over the weekend to “find” him enough votes to overturn the results of the November election.

Things got messier for the GOP after Mr. Trump vowed to back primary challengers against Mr. Kemp and Mr. Raffensperger at a rally that was ostensibly part of the final get out the vote push for Mr. Perdue and Ms. Loeffler.

Voters had sent both major political parties mixed messages before the runoff races on Tuesday.

The bad news for Republicans came hours after the candidates delivered their final pleas to voters and their final digs against their rivals.

Mr. Perdue said that Mr. Ossoff is a “trust fund baby who never created an American job” and warned he is weak when it comes to China.

“My plea to the people of Georgia is don’t get confused by all the nonsense,” Mr. Perdue said on “Fox & Friends.” “My mom and dad were school teachers. I was raised on a farm. I promise you my dad did not buy me a business.”

Mr. Ossoff said voters can count on receiving $2,000 stimulus checks if they send him and Mr. Warnock to Washington.

He also urged voters to head to the polls, saying they have a chance to “participate in this historic moment and make your voices heard.”

“When we win both of these Senate races we will pass $2,000 stimulus checks immediately for the American people,” he told reporters. “I spoke with the president-elect personally about that yesterday.”

Ms. Loeffler said she was focusing on fighting for lower taxes, a stronger economy and the Constitution.

“We can stop socialism from coming to America,” she said. “We can defend the American Dream for generations to come.”

Mr. Warnock vowed to fight for a new civil rights act and to strengthen voting rights and called it shameful that Ms. Loeffler is “aiding and abetting” Mr. Trump and his allies in their quest to overturn the results of the 2020 election, which she announced she would do Monday.

“It is shameful what she said last night,” Mr. Warnock said. “She wants to spend her time trying to take your voice.”

• Victor Morton contributed to this report.