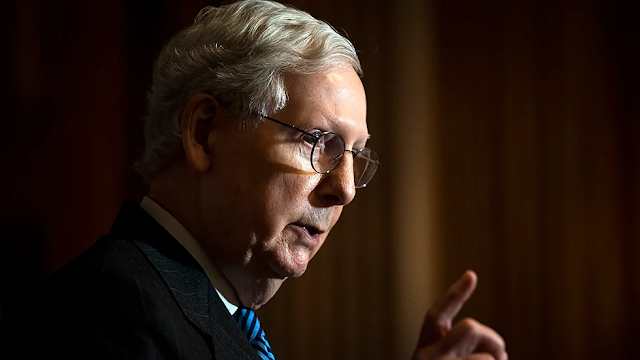 Democrats are shooting down an effort by Senate Minority Leader Mitch McConnell (R-Ky.) to include protections for the legislative filibuster as part of a Senate power-sharing deal.

"We’re not going to give him what he wishes. If you did that then there would be just unbridled use of it. I mean nothing holding him back," said Sen. Dick Durbin (Ill.), the No. 2 Senate Democrat, on Thursday.

McConnell has urged Senate Majority Leader Charles Schumer (D-N.Y.) to include a preservation of the 60-vote legislative filibuster in any deal they strike on how to organize an evenly split 50-50 Senate, a request that is threatening to drag out their talks and keep much of the Senate in limbo for several more days.

McConnell, according to Durbin, wanted to include in the Senate's rules a guarantee that there would be no effort to pursue the "nuclear option" — changing the rules with a simple majority rather than the higher 60- or 67-vote threshold — during the next two years, or as long as the 50-50 split lasted.

Schumer has been publicly tightlipped over their talks, as well as McConnell's specific demand, except to say that he believes they should agree to a resolution modeled off 2001, the last time there was a 50-50 Senate.

"On an organizing resolution, Leader Schumer expressed that the fairest, most reasonable and easiest path forward is to adopt the 2001 bipartisan agreement without extraneous changes from either side," a spokesman said earlier this week after an initial meeting between the two leaders failed to produce an agreement.

It's unclear if an alternative to protecting the filibuster in writing, like a handshake agreement between Schumer and McConnell or a floor speech by Schumer, could satisfy both sides and get the talks back on track. Democrats are poised to have their first caucus call since taking over the majority on Thursday.

Republicans argue that the organizing resolution is the best place to address the future of the filibuster because it prevents a decision from being made in the middle of a heated political debate.

“I believe the time is ripe to address this issue head on before the passions of one particular issue or another arise," McConnell wrote in a letter to his caucus earlier this week.

With a slim 50-50 majority that hinges on Vice President Harris breaking a tie, Democrats don't currently have the votes to nix the 60-vote legislative filibuster, even as the idea has gained steam in the caucus.

Progressive activists are pledging to ramp up pressure to try to get rid of, or at least weaken, the legislative filibuster, arguing that it stands in the way of many of their, and President Biden's, top priorities such as immigration reform, voting rights and democracy reforms and limits their options on healthcare.

"We should eliminate the filibuster," Sen. Ed Markey (D-Mass.) tweeted on Thursday.

But several Democrats, most notably Sen. Joe Manchin (D-W.Va.), are opposed to getting rid of it. Because Democrats only have 50 seats, they would need the support of every senator in order to change the rules on the filibuster via the "nuclear option."

But Democrats also believe that leaving it on the table as a potential pathway could force Republicans to cut deals and don't want to box themselves in as they pledge to pursue a "bold" agenda. They would face a wave of acrimony from progressives if they agreed to a demand that many believe McConnell would never sign on to if the situation was reversed.

"They should just have a simple organizing resolution like they have in the past. It’s not the time to make decisions like that, this is the time to simply figure out how are you going to share power when you have a 50-50 senate with Kamala Harris as the deciding vote," said Sen. Amy Klobuchar (D-Minn.), the chairwoman of the Rules Committee.

Sen. Chris Murphy (D-Conn.) added that there wasn't "any reason to look beyond the precedent that existed the last time we shared power in the Senate. "

"It’s generally up to the majority as to whether they want to pursue a conversation about changing the rules and we should reserve that right," Murphy said, adding that while there wasn't currently a consensus about what rules changes Democrats as a caucus could support, "that consensus may emerge down the line."

Posted by theodore miraldi at 10:56 AM