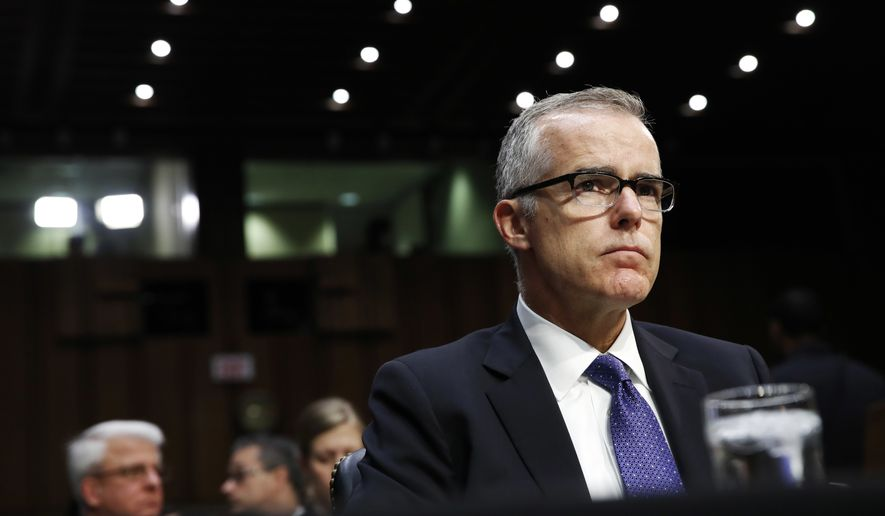 The FBI opened a counterintelligence probe into then-President Donald Trump in May 2017 based on “an articulable factual basis” that he might be secretly working on behalf of the Kremlin, according to a bureau document.

The disclosure is contained in an April 8, 2019, FBI memo that appears to close out the entire Russia probe a month after Special Counsel Robert Mueller finished his investigation. Mr. Mueller did not accuse Mr. Trump or any associate in a Russian conspiracy.

Former FBI Deputy Director Andrew McCabe acknowledged in February 2019 that he opened the counterintelligence investigation into Mr. Trump as a response to the president firing former FBI Director James Comey amid the Russia probe.

The Washington Times obtained the three-page “closing communication” under a Freedom of Information Act request to the FBI.

“Using predetermined criteria established by the Crossfire Hurricane investigation team, the FBI opened [deleted] based on an articulable factual basis that reasonably indicated that President Donald J. Trump may be or had been, wittingly or unwittingly, involved in activities for or on behalf of the government of the Russian Federation which may have constituted violations of federal criminal law or threats to the national security of the United States.”

A day after the FBI opened the Trump inquiry on May 16, 2017, Acting Attorney General Rod Rosenstein appointed Mr. Mueller.

Whether Mr. Mueller conducted any type of counterintelligence probe into Mr. Trump is not mentioned in his voluminous report. There is no evidence in the report that he was involved in Russian computer hacking and a social media information campaign against Hillary Clinton.

In May 2017, the FBI was heavily invested in Christopher Steele’s dossier and its list of about a dozen felony claims against Mr. Trump and his allies. The FBI came to believe the allegations, financed by the Democratic Party, were untrue and that some parts were Russian disinformation.

Mr. Trump, a builder of hotels, condos and golf courses, has had limited business interest in Russia. He looked at several options but has never constructed any project there. A New York Times report on his tax returns did not show any money from Russian banks.

The New York Times first reported on the FBI’s Trump probe in January 2019 and Mr. McCabe confirmed it a month later. He was fired as deputy director for not being forthcoming in an unrelated Justice Department inspector general investigation into press leaks.

Sen. Graham has harshly criticized the FBI, saying there was no evidence any of the targeted Trump allies had colluded with Russia.

“Former FBI Director Comey and his deputy Mr. McCabe, through their incompetence and bias, have done a great disservice to the FBI and DOJ, and the senior DOJ leadership who signed off on the work product called the Crossfire Hurricane investigation have created a stain on the department’s reputation that can only be erased by true reform,” Mr. Graham said.

Posted by theodore miraldi at 6:47 AM