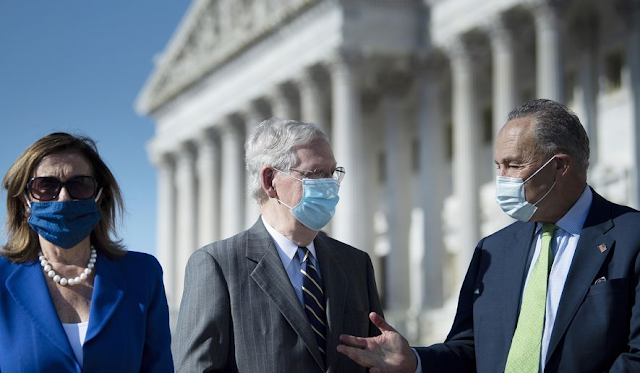 Scarcely had Donald Trump even packed his last bags and Senate Majority Leader Mitch McConnell was already throwing his final daggers at the president’s back, cutting deals with the Democrats, meeting behind closed doors with Sen. Chuck Schumer.

For those who aren’t familiar: The phrases come from George Orwell’s “Animal Farm,” the fictional account of a barnyard uprising against the oppressive humans. The rebellion, buoyed by the phrase “four legs good, two legs bad” — as a means of keeping the identity of the enemy simple, for the more simple-minded farm animals — is successful, and the humans are subdued. Ultimately, the pigs, who regard themselves as smarter and more worthy than the rest on the farm, begin to speak of the humans in friendly terms; begin to dominate their fellow animals; and finally, begin to walk on hind legs and surround themselves with trained guard dogs — to the great astonishment and fear of their fellow four-leggers. The propaganda push then becomes one of “four legs good, two legs better,” and a dramatic final scene sees one of the farm animals peering through a window, observing pigs and humans seated at a table, but unable to separate pig from human.

It’s the story of Trump’s presidency.

What’s the difference between Democrats and Republicans?

Republicans, in fact, were among his worst political enemies for the length of his entire presidency. Remember his starting days, when he had a Republican-controlled Senate, a Republican-controlled House, and Republicans refused to work to pass his agenda, forcing him to turn to executive orders, instead? When Trump refused to back down and bow down and do the elitist political thing and work with the globalists, his Republican enemies changed tactics and simply quieted down a bit. They worked with the president; actually, they pretended to work with the president.

As it now shows, as it’s now proven with the 10 “off with his head” pro-impeachment, anti-Trump Republicans — they simply pretended to work with the president, biding their time, waiting their days, to take revenge.

These Republicans were the pigs.

They were the pigs in power working with their human counterparts in the Democratic Party, pigs who could not accept how someone like Trump — ugh! — could possibly get elected, never mind lead the country. They were pigs in power who thought they knew better than Trump and the American people, and of late, 75 million American voters, so they resisted his agenda, both openly and behind the scenes, but more often, quietly because of concerns about midterm elections and Trump-supporting voters.

The sneakiness is no longer needed.

“Leader Schumer and Leader McConnell had a substantive meeting and made progress on the issues of quickly confirming President-elect [Joe] Biden’s nominees and conducting a fair impeachment trial,” a Schumer spokesperson said in a statement reported by Fox on the eve of Biden’s inauguration. “On an organizing resolution, Leader Schumer expressed that the fairest, most reasonable and easiest path forward is to adopt the 2001 bipartisan agreement without extraneous chances from either side.”

It’s a power-sharing promise between the two parties.

Just what conservatives want: Republicans cooperating with the socialists and globalists. And that statement came after McConnell threw Trump under the bus and blamed him for the violence in Congress on the cusp of the electoral vote count.

It’s one thing for Trump to be stabbed by Democrats. That’s expected. It’s another for Republicans to get their last licks, to make their final bloody stabs.

Posted by theodore miraldi at 10:18 AM