Welcome to the Dumbest Administration on Earth 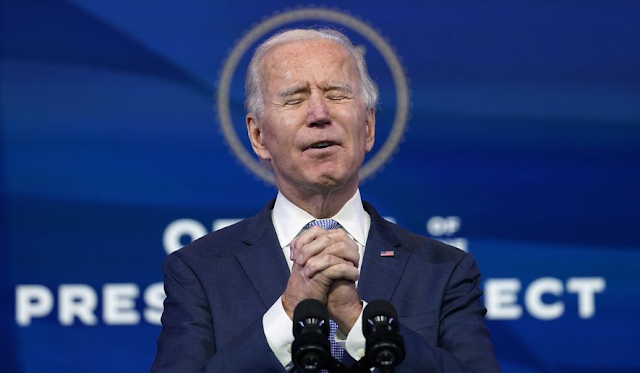 President-elect Joe Biden speaks at The Queen theater in Wilmington, Del., Wednesday, Jan. 6, 2021. Biden has called the violent protests on the U.S. Capitol "an
assault on the most sacred of American undertakings: the doing of the people's business." (AP Photo/Susan Walsh)

Ladies and gentlemen, welcome to the dumbest administration on earth.

Joe Biden was supposedly elected to end all the madness. Make the crazy stop. Give in to the media’s lunatic four-year temper tantrum so the rest of us can get a wink of sleep.

All Joe Biden had to do is … nothing really.

Just about all of his supposed plans for combatting the Chinese plague have been tried by Democrat governors and disastrously failed. Or they are ideas he stole from President Trump and are already working.

The only thing Mr. Biden is supposed to do different is NOT call it the “China Virus.” OK?

How about the Wuhan? Or the Wu-flu? The CCP virus?

Naw, we’re just funnin’ with you. We get it. Not allowed to mention where the “Kung Flu” came from. (It is kind of interesting to note for you “conspiracy” theorists out there that China was the only country on the planet last year to see its economy actually expand in 2020, Year of the China Virus.)

But, again, don’t call it the “China Virus.” That is the sum total of Mr. Biden’s mandate in this curious, muddled 2020 election. No “Wu Flu.”

So what is the first thing dopey Joe Biden wants to do? Pass a mask mandate.

Because, after all, that’s what all the riots this summer were about. Antifa doesn’t care about “Black Lives Matter.” They just want everyone to wear a mask.

That’s because they are responsible people dedicated to “stopping the spread” of COVID-19.

The whole problem with the “armed insurrection” at the U.S. Capitol the other week is that they were NOT being socially responsible by wearing masks. There they were mugging for pictures on the dais of the United States Senate — totally maskless!

So, here comes Joe Biden promising an emergency executive order on the first day of his presidency. The so-called “100-Day Masking Challenge” will require Americans to wear a mask on all federal property and during interstate travel.

First of all, when was the last time you went to the post office and somebody wasn’t wearing a mask? These people really need to get out more.

And what, pray tell, Sleepy Joe, are you going to do to someone who refuses to wear a mask inside the post office? Are you going to lock them up, Joe? Maybe send a drone after them. Call in the National Guard?

So is that why you guys were so anti-police all summer long during the endless riots? Since they were all masked up, no need to call in the National Guard.

Or, will the “100-Day Masking Challenge” be just one more stupid, unenforced law that only agreeable, law-abiding citizens obey?

Perhaps the best part of this emergency executive order is the mask requirement for all interstate travel. Because we don’t already laugh enough at people driving down the highway in a car all alone wearing a mask.

Other hot priorities for the incoming Biden administration is reopening travel from majority Muslim countries that the Barack Obama administration had identified as terrorist hot spots.

Also, Mr. Biden wants to jump back into bed with the Paris Climate Accords — to further hobble the U.S. economy while boosting the still-thriving Chinese economy.

And, of course, grant amnesty to millions of illegal aliens now in the country. Gee, I wonder why streams of caravans are piling up again on our Southern border.

Wonder if the Biden administration will require them to wear masks before stealing across our border into our country? How about COVID-testing? And contact tracing?

Probably not. That would be about as racist as calling it the “China Virus.”

Posted by theodore miraldi at 11:07 AM