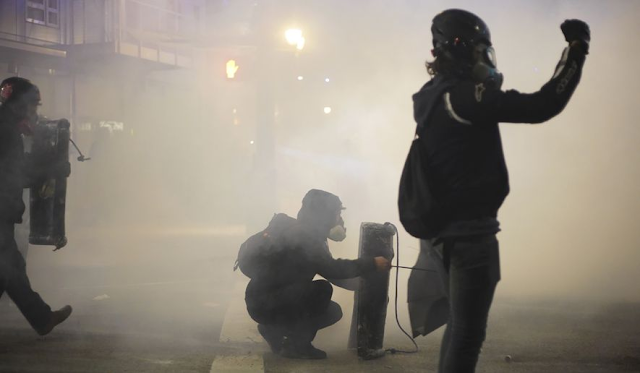 A group of protesters demonstrate Wednesday evening, Jan. 20, 2021, outside the U.S. Immigrations and Customs Enforcement (ICE) building in Portland, Ore.

All told, eight protesters were arrested on a variety of charges, the Portland Police Department said in a statement. Charges include rioting, possession of a destructive device, and reckless burning.

Some of the arrests were connected to the vandalism at the Democratic headquarters where windows were smashed and graffiti was spray-painted across the building.

The rioters also damaged an Immigration and Customs Enforcement building, throwing rocks, eggs and vandalizing the building, according to the Portland Police.

“To those gathered near the ICE facility: We have observed property damage to the building. Anyone who is involved in criminal behavior including: vandalism and graffitting is subject to arrest,” the police wrote on Twitter.

The protesters rallied against the police, decrying the deaths of unarmed Black men at the hands of law enforcement, according to a local Fox television affiliate.

Some of the protesters also demonstrated against Mr. Biden on the day of his inauguration. A group of protesters carried a sign reading, “We don’t want Biden We want revenge for police murders.”

The Portland Police Bureau said the events unfolded just hours after Mr. Biden was sworn in. They said about 150 people gathered downtown and marched to the Democratic Party headquarters.

Posted by theodore miraldi at 9:58 AM