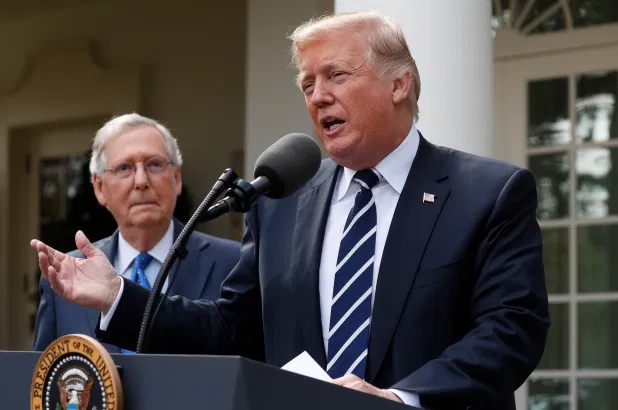 Just when Washington has a chance to turn the page, fresh signs emerged Tuesday that the past is not yet past. It is almost certain now that the Senate will hold an impeachment trial of President Trump next week.

Even worse, it looks probable he will be convicted of a single charge stemming from the Capitol invasion.

The history-making event got the green light from McConnell on his last day as Senate majority leader.

Speaking on the Senate floor Tuesday, McConnell said of the Jan. 6 incident: “The mob was fed lies. They were provoked by the president and other powerful people and they tried to use fear and violence to stop a specific proceeding of the first branch of the federal government which they did not like.”

The comments build on earlier reports that McConnell was glad House Democrats were impeaching the president and that he might vote for conviction. The speech signals he is likely a yes vote, which would open the GOP floodgates and yield at least the 67 Senate votes needed for conviction.

He spoke as reports circulated that Speaker Nancy Pelosi would transmit the House charge to the Senate later this week, with a trial to follow.

Although it’s not clear the two developments are connected, they share the odor of a bipartisan ­establishment striking back at Trump even after he leaves the White House. Senate conviction would trigger a second vote to bar him from ever again holding public office. Only a simple majority is needed, so passage would be a foregone conclusion.

That would prevent Trump from seeking the presidency in 2024 and arguably rob him of the ability to keep his voters intact. That seems to be the point, with McConnell reportedly saying that barring Trump from running again would rid the party of him and his movement. Deplorables, indeed.

Sen. Chuck Schumer made it clear that permanently canceling Trump is his aim, saying Tuesday the president would continue to use “the prospect of a future presidential run to poison the public arena.”

“Donald Trump should not be eligible to run for office ever again,” Schumer added. “All of us want to put this awful chapter in our nation’s history behind us.”

“All of us” now appears to include McConnell and a decisive number of Republicans.

There’s no question a ban would hobble Trump’s appeal. But it would also deepen the nation’s overheated polarization, with the vast majority of the 74.2 million Trump voters still in his corner, according to recent surveys.

A better path would have been for Joe Biden, who talks about forging national unity, to urge Pelosi not to send the impeachment charge to the Senate. With Trump out of office, the matter would have ended there and Biden would have had a cleaner slate to start his administration.

Instead, the nation is about to be pulled back again not only to the events of early January, but to all the passions of the Trump presidency. Worse, Pelosi is talking about a commission to investigate the already debunked Trump-Russia collusion claims. She can’t quit the president she loved to hate.

Mitch McConnell says Capitol rioters ‘were provoked by the president’

For Senate Republicans, voting to convict Trump and ban him from elective office is foolish and unnecessary. It’s not obvious his voters would stick with a party that consigned him to political purgatory, or what would remain of the GOP base if the America First movement bolted.

The case of Rep. Liz Cheney is a good example. The No. 3 leader in the House, she was one of only 10 House Republicans to vote for impeachment, and the immediate blowback in her home state of Wyoming has been fierce. The state party has condemned the vote and one Republican there was quoted as saying, “She couldn’t get elected as a dog catcher here now.”

McConnell was just re-elected, so his seat is safe, but the GOP will get slaughtered in the 2022 midterms if Trumpers stay home, giving Dems at least four years of complete control of Washington.

The president and McConnell were always something of an odd couple, but their partnership succeeded even after the GOP lost the House in 2018. Most critically, Trump nominated and McConnell held his slim majority together to win Senate confirmation for nearly 250 federal judges, including three for the Supreme Court.

But the wily Kentucky lawmaker, first elected to the Senate in 1984, was never pals with Trump and grew increasingly unhappy with the president’s claims of fraud in the presidential results. On Dec. 15, McConnell became the first top Republican to call Biden president-elect.

At that point, the GOP appeared to have held the Senate, having 50 seats and needing to win just one of the two Jan. 5 Georgia runoff ­races to keep its majority. But Trump relentlessly attacked the Republican governor and secretary of state for calling Georgia in favor of Biden, and GOP insiders are convinced the attacks suppressed the party’s turnout and handed Dems both seats and Senate control with Vice President Kamala Harris breaking ties.

The Capitol invasion came the very next day, with McConnell, along with all members of both houses, being rushed into protective hiding.

That was the final straw in their relationship, with McConnell telling people he was “done” with Trump. McConnell’s wife, Secretary of Transportation Elaine Chao, quit to protest the president’s speech at the pre-invasion rally.

In his near-20-minute farewell address Tuesday, a composed Trump displayed none of the rancor that marred the end of his term as he recounted his considerable accomplishments. In an echo of Dwight Eisenhower’s farewell warning against the rise of the military-industrial complex, Trump warned against a lack of confidence in America’s history and against a crackdown on free speech.

Near the finish, he said: “As I prepare to hand power over to a new administration at noon on Wednesday, I want you to know that the movement we started is only just beginning. There’s never been anything like it.”

It’s true there’s never been anything like it. But it remains to be seen whether his movement is just beginning — or close to the end.

Reader David Koral, noting city and state screw-ups in getting New Yorkers vaccinated, raises a red flag. He writes: “I wonder if the people calling for ‘health care for all’ will remember this the next time they want to put medical treatment in the hands of men like Andrew Cuomo and Bill de Blasio.”

Headline: “Lab-Grown Meat With Better Taste, Made-To-Order Marbling” But what exactly is it? Wait, don’t tell me.

The MTA is planning to hold off on imposing 4 percent fare hikes on subways and buses, a decision Chairman Pat Foye credits to “an unprecedented level of outreach.”

So it took eight hearings and 2,100 public comments for the agency to realize riders are broke.

Posted by theodore miraldi at 9:26 AM