Kendi suggested Justice Amy Coney Barrett was a 'white colonizer' for adopting children from Haiti. Apparently, he thinks we need a Department of Antiracism to stop behavior like that. 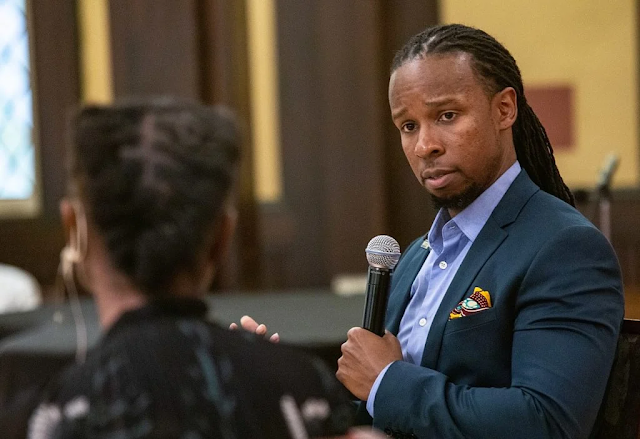 You’ve probably heard that Ibram X. Kendi, author of “How To Be An Antiracist,” just teamed up with Netflix to create films and animated shorts about racism for adults through preschoolers.

You may not have heard some of Kendi’s other ideas, such as his proposal to create a federal Department of Antiracism to go after speech and policies that don’t fit Kendi’s definition of “antiracist.”

In Kendi’s paradigm, by the way, there is no such thing as simply being “not racist.” If you are not actively advocating Kendi’s brand of antiracism, he suggests, you are by definition being racist.

Kendi has proposed an amendment to the U.S. Constitution that would make “racial inequity over a certain threshold, as well as racist ideas by public officials” unconstitutional. Inequity, of course, is different to leftists than inequality. As Vice President Kamala Harris explained in a video that inspired comparisons to communism, to leftists equity means government rigging equal outcomes.

Racial inequities, Kendi says, are “evidence of racist policy.” That means if a young woman who isn’t white is making less money than a white woman of the same age, that inequity of income must be a result of policies that are racist.

While policies that produce inequity should certainly be scrutinized (and their political proponents held accountable), the assumption that any significant difference in outcomes is a result of racism is wildly divorced from the American belief in personal responsibility. All Americans deserve the opportunity to pursue happiness; that doesn’t mean the government measures out doses of it.

Policies that enable abortions are extremely racially inequitable, and leftists never call the results racist. While black Americans make up just over 13 percent of the population, 36 percent of abortions in America kill black babies. In 2015, there were almost as many abortions of black babies in America as white babies, even though white Americans make up over three-fourths of the population. By Kendi’s logic, Planned Parenthood clearly has to go — but somehow I don’t think that’s what he has in mind.

So what policies would Kendi’s Department of Antiracism go after? It would have to “preclear,” Kendi says, “all local, state and federal public policies to ensure they won’t yield racial inequity.” That means a bureaucratic agency composed of completely unelected “experts” can nuke any policy, from a law passed by Congress to a local school board decision, that it predicts will cause “inequity.”

Not only would Kendi’s department appoint itself over every government policy from Washington, D.C. to the Kalamazoo School Board, it would also “investigate private racist policies.” So if your local homeowners’ association, homeless shelter, or private preschool is perpetuating policies that the Department of Antiracism thinks cause inequitable results, it won’t be long before the G-men show up.

Kendi’s proposal doesn’t stop with policies. It would also police public officials’ speech. “The DOA would be empowered with disciplinary tools to wield over and against policymakers and public officials who do not voluntarily change their racist policy and ideas,” Kendi says. Threatening government discipline against people who don’t “voluntarily” change their ideas sounds, well, like regimes the United States used to fight wars against.

Kendi’s proposal to eradicate policies or speech he deems racist begs the question: what does he think is racist?

“In order to truly be antiracist,” Kendi has insisted, “you also have to truly be anti-capitalist.” The logic suggests that any policies promoting capitalism would certainly not make it past the Department of Antiracism.

Kendi has also leveled criticism at now-Supreme Court Justice Amy Coney Barrett for adopting black children from Haiti. “Some White colonizers ‘adopted’ Black children,” he tweeted shortly after President Trump nominated Barrett. “They ‘civilized’ these ‘savage’ children in the ‘superior’ ways of White people, while using them as props in their lifelong pictures of denial, while cutting the biological parents of these children out of the picture of humanity,” Kendi continued. If Kendi considers adoption of black children by white parents racist, would it be allowed under his proposed agency?

Still today, problems in society exist because man is a sinful creature, desperately in need of the grace and restoration which come not from federal agencies but from God.

Of course, all Americans should oppose racism wherever they encounter it. But that doesn’t mean labeling free-market economics or adoption as racist. It doesn’t mean having unelected bureaucrats shut down speech and policies with which they disagree.

It does mean recognizing the fallen nature of man, examining our own hearts with sincerity, and loving our neighbor regardless of his skin color. That’s not a job for a new federal agency. That’s a job for us.