Ben Shapiro asked, “Did the Chinese government write this?’ 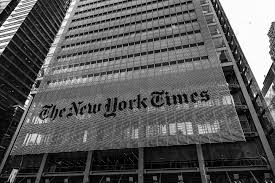 The New York Times was roasted on Monday evening for publishing a glowing story about China that was quickly labeled "propaganda" by critics, as many readers pointed out that the liberal newspaper doesn’t seem to mind pro-communist features but an op-ed by a Republican lawmaker caused chaos inside the newsroom.

"While many countries are still reeling from Covid-19, China — where the pandemic originated — has become one of the safest places in the world," she wrote. "Restaurants are packed. Hotels are full. Long lines form outside luxury brands stores. Instead of Zoom calls, people are meeting face to face to talk business or celebrate the new year."

She declared China as the "only major economy to have grown" amid the coronavirus pandemic and took a series of shots at the United States throughout the story.

"The pandemic has upended many perceptions, including ideas about freedom. Citizens of China don’t have freedom of speech, freedom of worship or freedom from fear — three of the four freedoms articulated by President Franklin D. Roosevelt — but they have the freedom to move around and lead a normal day-to-day life. In a pandemic year, many of the world’s people would envy this most basic form of freedom," Yuan wrote, adding that "some Americans assert that it is their individual right to ignore health experts’ recommendations to wear masks, putting themselves and others at increasing risk of infection."

The Times reporter wrote citizens of China were "perplexed" at the United States’ reporting of high daily cases and its overall handling of the pandemic. "My latest on how the pandemic has upended many perceptions, including ideas about freedom. Chinese don’t have freedom of speech, freedom of worship or freedom from fear, but they have the freedom to move around and lead a normal day-to-day life," Yuan tweeted to promote the story.

The Times is famously staffed by liberals who publicly air grievances with the paper on social media, a practice that became national news last year when they objected to an op-ed from Sen. Tom Cotton, R-Ark., about the George Floyd unrest that caused an uproar at the newspaper.

The publication sparked a revolt among Times journalists, with some saying it endangered Black employees. Staff members called out sick in protest, and there was a reported "civil war" within the paper between the young "woke" and older liberal journalists.

However, the staffers didn’t seem to have any issues with a piece published by the Times in October by a member of the Executive Council in Hong Kong headlined, "Hong Kong is China, Like it or Not." The op-ed declared, "No amount of outcry, condemnation or sanctions over the Chinese government’s purported encroachment in Hong Kong’s affairs will alter the fact that Hong Kong is part of China and that its destiny is intertwined with the mainland’s."

Many took to Twitter to condemn the Times for fawning over China: