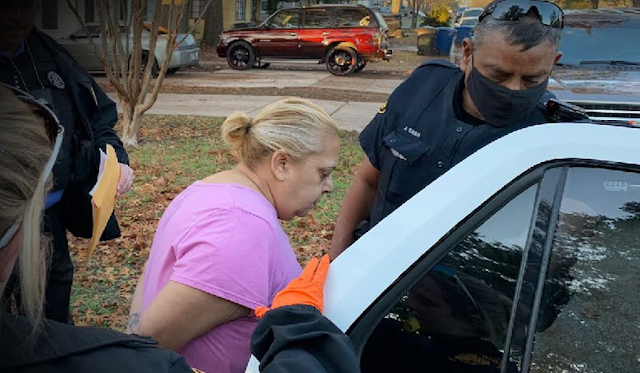 Rachel Rodriguez, who appeared in Project Veritas footage released in October, was arrested for election fraud, illegal voting, unlawfully assisting people voting by mail, and unlawfully possessing an official ballot, all of which are felonies under the Texas election code.

“Many continue to claim that there’s no such thing as election fraud. We’ve always known that such a claim is false and misleading, and today we have additional hard evidence,” Mr. Paxton said in a statement. “This is a victory for election integrity and a strong signal that anyone who attempts to defraud the people of Texas, deprive them of their vote, or undermine the integrity of elections will be brought to justice.”

In the video, Ms. Rodriguez was seen persuading an elderly woman to change her vote on her mail-in ballot from Republican Sen. John Cornyn to Democratic candidate M.J. Hegar, then giving her a shawl as a gift in an apparent violation of election law.

Ms. Rodriguez told a Project Veritas investigator that she was bringing “at least 7,000 ballots to the polls” in the San Antonio area, and that she had a team of at least five other people working on “flipping people,” referring to voters.

She also said that she was working as a consultant for Republican congressional candidate Mauro Garza, but that she was trying to convince voters to vote for him and then vote a straight Democratic ticket on the rest of the ballot.

The attorney general’s office said that its election-fraud division reviewed dozens of hours of raw footage, and that in “an uncharacteristic moment of honesty, Rodriguez acknowledged on video that what she was doing is illegal and that she could go to jail for it. If convicted, Rodriguez could face up to 20 years in prison.”

Shortly after the video was released, Mr. Garza said on Facebook that she was a former campaign volunteer and condemned voter fraud, saying that any volunteer or staffer who appeared to engage in such wrongdoing would be fired and reported to authorities.

Mr. Paxton did not say whether others working with Ms. Rodriguez had been arrested, but that the investigation was ongoing.

“The shocking and blatantly illegal action documented by Project Veritas demonstrates a form of election fraud my office continually investigates and prosecutes,” Mr. Paxton said. “I am fiercely committed to ensuring the voting process is secure and fair throughout the state, and my office is prepared to assist any Texas county in combating this insidious, un-American form of fraud.”

Posted by theodore miraldi at 2:53 PM