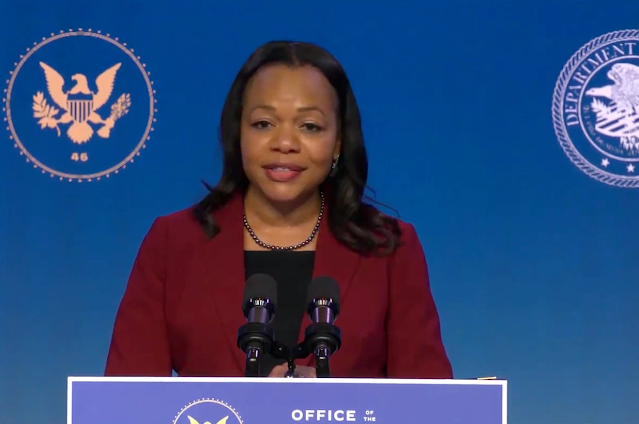 Reasonable people probably agree that we should all get a pass for youthful indiscretions. But what if the mistakes involve advocating racism and anti-Semitism — and are then followed by post-college behavior that’s almost as bad, such as supporting racially motivated policies?

“No problem” seems to be President Biden’s answer.

That’s the only way to understand his refusal to withdraw the nomination of Kristen Clarke for the crucial position of assistant attorney general for civil rights once it came out that she’d advocated theories of black racial superiority and anti-Semitism as a student at Harvard in the 1990s.

Clarke was an easy pick for Biden to join the Department of Justice along with attorney-general-nominee Judge Merrick Garland. As head of the Lawyer’s Committee for Civil Rights Under Law and previously a staffer for New York’s attorney general, she’s a leading left-wing attorney. As an African-American woman, Clarke also punches the ticket for Biden’s diversity goals and fills a top post with an ally of the Black Lives Matter movement.

But there’s more to Clarke than her glittering résumé.

While a Harvard undergrad, Clarke argued in the student newspaper that blacks had greater “mental, physical and spiritual abilities” than whites because of the amount of melanin in their skin, a racist theory advocated by race-baiters like Louis Farrakhan and the Nation of Islam.

As president of the Harvard Black Students Association, she invited author Tony Martin to speak on campus, despite his rabid anti-Semitism and Holocaust denial. She then defended him as a “black intellectual who bases his information” — i.e., his anti-Semitic slurs — “on indisputable fact.”

Yes, that was a long time ago, and perhaps we should draw a veil over all college antics. But ask yourself what the reaction would have been if President Donald Trump had nominated someone to be the country’s top civil rights watchdog who had advocated white racial superiority and defended an anti-Semitic Holocaust denier in college?

We all know the answer: The nominee — and Trump — would have been crucified by the mainstream media.

In recent years, we’ve seen that Republican nominees for office haven’t been given a pass for allegations about their youth. Justice Brett Kavanaugh was put through hell over an uncorroborated allegation of assault that purportedly took place when he was in high school. Appeals Court Judge Neomi Rao was roasted by Democrats during her confirmation process for a perfectly reasonable op-ed about respecting women that she wrote while a Yale undergraduate.

In the only interview she’s given since her nomination, Clarke told the Jewish Forward that the invitation to Martin was a “mistake” but defended the racist diatribe as a parody even though it reads as a straightforward defense of that crackpot idea.

And it turns out Clarke’s soft spot for anti-Semitism is also of recent vintage. In 2018, she signed a letter defending Tamika Mallory, then the president of the Women’s March, after she had been called out for anti-Semitic actions while leading the protest group and for being an ally and cheerleader for Farrakhan.

Rather than apologize, Clarke essentially told the Forward she’d do it again because, apparently, it was more important to show solidarity for a fellow “woman of color” than take a stand against hate.

All that should have been trouble for her nomination. But since the story about her past broke two weeks ago on Fox News, the mainstream press has given it the Hunter Biden treatment. Much like the way they deep-sixed The Post’s scoop about the president’s son’s corruption, The New York Times, The Washington Post, CNN and MSNBC haven’t printed or broadcast a word about Clarke’s issues.

Clarke’s positions on racial quotas for hiring and college admissions were already troubling. So, too, were her efforts to prevent prosecution of Black Panther thugs who intimidated Philadelphia voters and a corrupt Mississippi political boss. But her radical past and belief that anti-Semites who are black women deserve a pass mean she doesn’t deserve the job.

The liberal media blackout of the story about Clarke shouldn’t enable her to avoid scrutiny. More important, if Joe Biden means what he says about opposing hate, there should be no room in his administration for her.

Posted by theodore miraldi at 5:21 AM