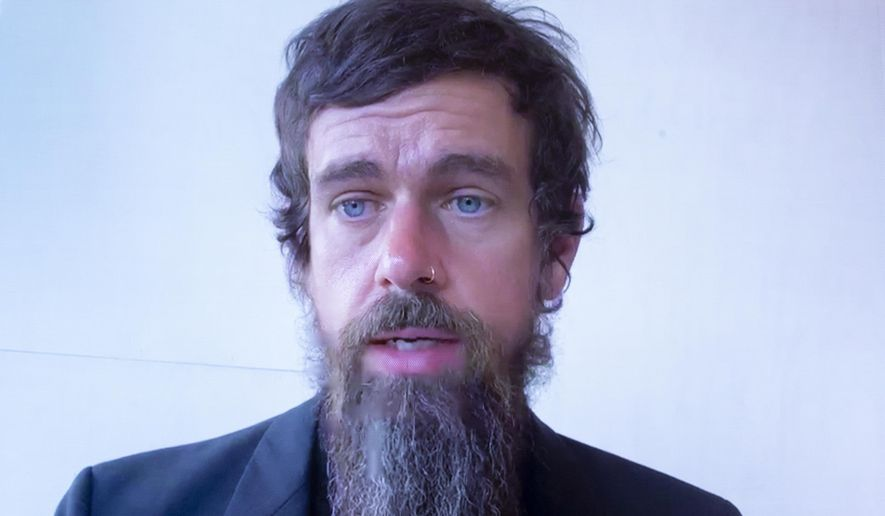 In this Wednesday, Oct. 28, 2020, file photo, Twitter CEO Jack Dorsey appears on a screen as he speaks remotely during a hearing before the Senate Commerce Committee on Capitol Hill, in Washington. Dorsey broke his silence to defend his company’s ban of President Donald Trump as the right decision, but warned that it could set a dangerous precedent. The ban, he said, revealed Twitter’s “failure” to create an open and healthy space for what Dorsey calls the “global public conversation.” (Michael Reynolds/Pool Photo via AP, File)

The guerilla investigative outfit released Thursday a stunning undercover video of Twitter CEO Jack Dorsey talking about how the platform plans to concentrate on more than President Trump’s account, which was shuttered on Jan. 8, two days after the U.S. Capitol riots.

In the last week, Twitter has permanently suspended Mr. Trump’s account; shut down more than 70,000 accounts identified as spreading QAnon conspiracy theories, and raised the specter of politically motivated censorship as prominent Republicans and conservatives report dramatic decreases in their followers.

At one point, Mr. Dorsey refers on the video to the “moves that we’re making today around QAnon.” The QAnon accounts were deleted Tuesday, indicating that the footage is recent.

“So, the focus is certainly on this account [@realDonaldTrump] and how it ties to real-world violence,” Mr. Dorsey said in the hidden-camera video. “But also, we need to think much longer-term around how these dynamics play out over time. I don’t believe this is going away anytime soon.”

Twitter spokesperson Brandon Borrman downplayed the significance of the revelations, tweeting, “Does it really count if your CEO tweets it out to the world the day before?”

What Mr. Dorsey said was in many respects less astonishing than the fact that Project Veritas was able to get so close to perhaps the world’s most powerful and reclusive tech titan.

Project Veritas president James O’Keefe did some crowing about the “Twitter insider” who passed along the video.

“There you have it, Jack Dorsey, CEO of Twitter, recorded by one of his own employees, an insider whistleblower at Twitter, recorded saying this is going to be much bigger than just one account,” said Mr. O’Keefe in a video post.

He said more than a dozen people had reached out to Project Veritas this week with “video evidence insider Twitter,” and advised viewers to “stay tuned.”

“They may be private companies, but they have more power than all three branches of government,” Mr. O’Keefe said.

Mr. Dorsey issued a defense Wednesday of the decision to ban Mr. Trump from his favorite platform, tweeting, “I do not celebrate or feel pride in our having to ban @realDonaldTrump from Twitter, or how we got here.”

“After a clear warning we’d take this action, we made a decision with the best information we had based on threats to physical safety both on and off Twitter. Was this correct?” Mr. Dorsey said on his @jack account. “I believe this was the right decision for Twitter.”

Posted by theodore miraldi at 12:36 PM