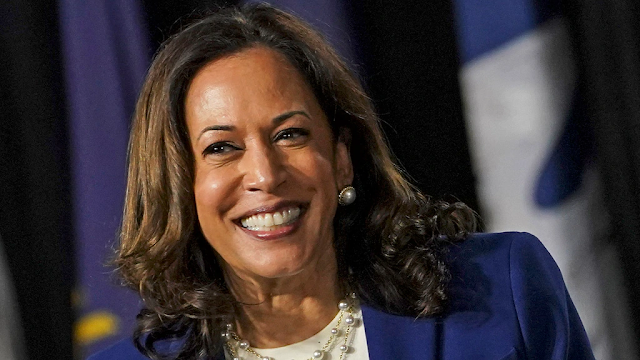 The Washington Post removed an unflattering tidbit about Vice President Kamala Harris from a 2019 feature and republished a new version of the story that is friendlier to the Democratic media darling -- but eventually restored a link to the original after widespread backlash.

Reason reporter Eric Boehm noticed the edit and took the Post to task in a scathing breakdown of the situation.

The Washington Post oddly removed an unflattering tidbit about Vice President Kamala Harris from a 2019 feature and republished a new version of the story. (Saul Loeb/Pool Photo via AP)

"When The Washington Post published a 2019 campaign trail feature about then-presidential hopeful Kamala Harris' close relationship with her sister, it opened with a memorable anecdote in which Harris bizarrely compared the rigors of the campaign trail to…life behind bars. And then proceeded to laugh—at the idea of an inmate begging for a sip of water," Boehm wrote, calling it "an extremely cringeworthy moment" that painted Harris in a negative light.

"But now that Harris is vice president, that awful moment has seemingly vanished from the Post's website after the paper ‘updated’ the piece earlier this month," Boehm wrote.

BIDEN, HARRIS POST-INAUGURATION MEDIA COVERAGE EXPECTED TO BE MUCH FRIENDLIER THAN TRUMP-ERA VITRIOL

The original Post feature from 2019 featured a tale of Harris comparing campaigns to prisons to her sister, Maya, when making a point that finding time to relax on the campaign trail is similar to prisoners seeking food and water. The first seven paragraphs of the 2019 Post story appeared like this:

It was the Fourth of July, Independence Day, and Kamala Harris was explaining to her sister, Maya, that campaigns are like prisons.

She'd been recounting how in the days before the Democratic debate in Miami life had actually slowed down to a manageable pace. Kamala, Maya and the rest of the team had spent three days prepping for that contest in a beach-facing hotel suite, where they closed the curtains to blot out the fun. But for all the hours of studying policy and practicing the zingers that would supercharge her candidacy, the trip allowed for a break in an otherwise all-encompassing schedule.

"I actually got sleep," Kamala said, sitting in a Hilton conference room, beside her sister, and smiling as she recalled walks on the beach with her husband and that one morning SoulCycle class she was able to take.

"That kind of stuff," Kamala said between sips of iced tea, "which was about bringing a little normal to the days, that was a treat for me."

"It's a treat that a prisoner gets when they ask for, 'A morsel of food please,' " Kamala said shoving her hands forward as if clutching a metal plate, her voice now trembling like an old British man locked in a Dickensian jail cell. "'And water! I just want wahtahhh….'Your standards really go out the f—ing window."

"It should go without saying that choosing to run for the most powerful political office in the world is absolutely nothing like being behind bars—and getting to squeeze in a morning SoulCycle session before sitting down for an interview with a national newspaper is not remotely the same as dying of thirst. None of this is funny," Boehm wrote before revealing the paragraphs had been scrubbed from the Post’s website.

The story was updated on Jan. 11, 2021 – two years after it was initially published – and an additional reporter’s byline was added along with the editor’s note "This story has been updated from an earlier published version."

Boehm was baffled at the edit.

"Its disappearance suggests something about the Post, and about the way traditional political media are preparing to cover Harris now that she's one heartbeat away from the presidency," the Reason reporter added.

A spokesperson for the Post initially told Reason that ahead of the inauguration of Joe Biden and Harris it "repurposed and updated some of our strong biographical pieces about both political figures."

"The original story remains available in print," the Post spokesperson added, a reminder that anyone with a 2019 hard copy of the paper can still read the unflattering story about Harris.

Following the Reason report and widespread backlash, the Post added a link to the original report and admitted making an editorial mistake.

"As part of our Transfer of Power coverage and special sections produced on Biden and Harris, we repurposed and updated some of our strong biographical pieces about both political figures. The profile of Maya Harris was updated with new reporting, and while the original story remained available on The Lily (a separate section of The Post), we should have kept both versions of the story on The Post’s site (the original and updated one), rather than redirecting to the updated version. We have now done that, and you will see the link to the original at the top of the updated version," Washington Post vice president of communications Coratti Kelly told Fox News.

Before the Post’s correction, Boehm wrote that the paper’s approach to covering Harris going forward should be under a microscope.

"The Post, of course, can do whatever it pleases with its own content. It can update or rearrange or delete any detail in any story at any time," Boehm wrote. "Still, the decision to remove that specific passage—and to replace it with a puffy opening about how Maya has ‘been a constant companion along Kamala Harris's journey into history’ —is questionable at best… it also raises questions about the Post's approach to covering Harris going forward."

Many others took to Twitter to condemn the Post for initially removing the original version of the story: