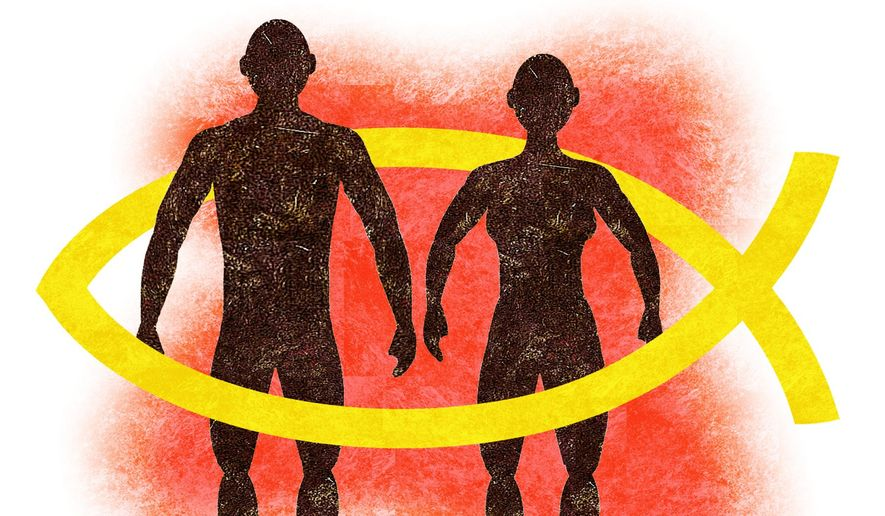 Illustration on two sexes and Christian belief by Alexander Hunter

On Feb. 11, 2021, Max Lucado, an evangelical megastar and best-selling author, issued an apology to the National Cathedral. More specifically, Mr. Lucado lamented what he described as how he had “disrespected” and “wounded” the cathedral’s “LGBTQ community” in “devastating ways” in his previous writings and sermons.

Mr. Lucado then tied a bow around his mea culpa by declaring, “Faithful people may disagree about what the Bible says about homosexuality, but we agree that God’s Holy Word must never be used as a weapon to wound others.”

Aside from the fact that it’s hard not to raise an eyebrow at the ontological contortions Mr. Lucado employs as he conflates race (an immutable God-given characteristic) with a volitional sexual act, let’s zero in on his claim that “faithful” people can disagree about what the Bible says on matters of sex and sexual morality.

A good place to start might be with the Apostle Paul. After all, he did write nearly 30% of the New Testament, and it’s, therefore, arguable that he, thus, set the definition of much of what has come to be called Christianity. You might think the “faithful” (among whom I assume Mr. Lucado considers himself to be a part) would want to take Paul’s description of “the faith” seriously.

Here’s what Paul wrote to the first-century church in Rome: “For although they knew God … they became futile in their thinking, and their foolish hearts were darkened … For this reason, God gave them up to dishonorable passions.” Now, lest we be confused, Paul then defines for us exactly what he means. “Women exchanged natural relations for those contrary to nature, and the men likewise gave up natural relations with women.”

But that’s just Paul, you say. Everyone knows he was a homophobe. He and Moses stand alone in their bigoted and unenlightened legalism. Aside from the writings of these two “haters,” everything else in scripture is affirming, tolerant, non-judgmental and inclusive — isn’t it?

Well, not so fast. Let’s take a look at St. Peter, the rock upon which Jesus himself said He would build His church. What did this first-among-leaders of the early church write to the “faithful?”

Frankly, you might be stunned to discover that Peter was more unreserved in his comments and condemnations than even Paul. In his second epistle, he wrote: “There will be false teachers among you … and many will follow their sensuality … and … despise authority … Like irrational animals, [and] creatures of instinct …, reveling in their deceptions …, they promise freedom, but they themselves are slaves of corruption.”

Then, there’s the early church letter from St. Jude, a man that history tells us was the actual half-brother of Jesus. He is unequivocally clear: “Sodom and Gomorrah and the surrounding cities, which indulged in sexual immorality and pursued unnatural desire, serve as an example by undergoing punishment … These people are … swept along by winds; fruitless trees in late autumn, twice dead, uprooted; wild waves of the sea, casting up the foam of their own shame; wandering stars, for whom the gloom of utter darkness has been reserved; forever.”

Oh, but Jesus never speaks about this stuff — right? Well, not so fast; that’s actually wrong. Jesus did address all of this, and he did so quite clearly. Consider his final words in his Revelation to the Apostle John:

“Write this down, for these words are trustworthy and true … It is done! I am the Alpha and the Omega, the beginning and the end … The one who conquers will have this heritage, and I will be his God, and he will be my son. But as for … the faithless, the detestable …, the sexually immoral (and yes, by all accounts, this would include unbiblical heterosexual and homosexual acts) … and all liars, their portion will be in the lake that burns with fire and sulfur, which is the second death.”

So, Max, I am not sure what you mean when you suggest that “faithful” people can disagree about what the Bible says on sex and sexual morality. But, it appears that if Jesus and the early church fathers were able to respond (oh, that’s right, they already did), they’d say, “Well, no, the ‘faithful’ don’t disagree.” In fact, the church father’s and even Christ himself might remind you that the “Holy Word of God” that you claim to honor is pretty clear on all this stuff and that it shows little patience for any tip-of-the-hat to today’s identity politics that you just apparently elevated above it.

Posted by theodore miraldi at 5:00 PM