'Dismantling This IMMORAL Wall': Biden Pulled by LEFT-WING on Immigration 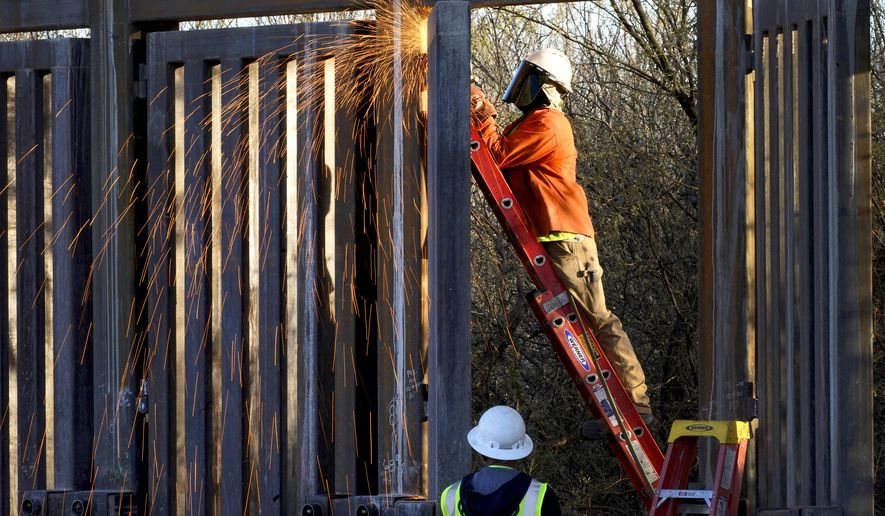 Immigrant-rights and environmental groups have a firm message for President Biden: Tear down that wall.

But everyone from the Sierra Club to the American Civil Liberties Union says that’s not enough. They said Mr. Biden needs to make clear he’ll eventually take down walls built under Mr. Trump.

“The wall itself is an immoral monument to settler colonial destruction,” said the Sierra Club’s Christopher Basaldú, a member of the Carrizo Comecrudo Tribe of Texas. “This most recent executive order should be a critical first step in stopping and eventually dismantling this immoral wall and the connected systems of border militarization.”

The wall is one of several areas of immigration and border policy where groups on the political left are pushing Mr. Biden to go further and faster, even as his team fears inviting a new surge of illegal immigration.

Some groups are demanding more releases from immigration detention and a more aggressive approach to stopping deportations, despite a judge’s order halting Mr. Biden’s 100-day pause on removals.

He left office with some 460 miles of barrier erected on his watch. Most of that came in areas that had previously had vehicle barriers or fencing, constructed in the Bush and Obama administrations, but 47 miles came on land never before controlled by a barrier.

More than 260 of the miles were built using money Mr. Trump redirected from Pentagon accounts — moves that the activist groups have challenged in court. They’ve said if they prevail, they’ll demand walls built using the Defense Department money come down.

“It is still our position that the wall should be taken down and the environmental damage mitigated,” said Dror Ladin, senior staff attorney at the ACLU.

The Supreme Court had been slated to hear oral argument on one pot of Defense Department money later this month, but the justices postponed the hearing at the request of the Biden team, which said it needed time to figure out where things stand.

Mr. Biden said late last year that “there will not be another foot of wall constructed” on his watch, but said in an interview with Black and Hispanic reporters that he wouldn’t tear down what had been erected.

Ken Cuccinelli, the former No. 2 man at Homeland Security under President Trump, said the idea of tearing down walls “would look so outrageous to the overwhelming majority of Americans,” though the pressure will be intense from some Biden supporters to do so.

“He’s in a real bind with the radical left on this,” Mr. Cuccinelli said.

It’s not clear how much Mr. Biden’s team is ready to grapple with the question of tearing down already-built wall.

Homeland Security referred inquiries to CBP, which provided a statement defending Mr. Biden’s construction pause but did not address questions about the calls to pull down existing structures.

And his legal team has given no indications in court documents of how it would approach the matter.

Adam Isacson, director for defense oversight at the Washington Office on Latin America, said the new administration is focused on revoking Trump-era immigration policies and dealing with rising numbers of migrants attempting to jump the border.

There’s also a personnel crunch. While new Homeland Security Secretary Alejandro Mayorkas is in place, much of the rest of the border security team remains murky.

At his confirmation hearing on Jan. 19 Mr. Mayorkas said he hadn’t looked into the question of taking down already-built wall.

Mr. Biden may have complicated his legal situation with his statement to Congress last week officially canceling the border emergency by declaring Mr. Trump’s determination “unwarranted.”

That could give ammunition to the ACLU, Sierra Club and other groups in their court cases challenging use of the money.

Mr. Biden, in addition to cutting off the spigot of Defense Department cash, ordered a 60-day pause on construction using money Congress specifically allocated toward the wall over the last four years.

The president called for a review team to ponder whether he can redirect that money away from wall construction.

Mr. Isacson suggested the administration’s next step should be to revoke the environmental waivers the Trump team issued to speed construction. Canceling the waivers would snare any new wall construction in red tape and give wall opponents new avenues for legal challenges, tying up construction for years.

As for the fate of already-built wall, Mr. Isacson says a realistic goal is downgrading specific sections built through environmentally sensitive lands, either by adding gates or restoring the old vehicle barriers that allowed wildlife to pass back and forth.

He said the way Congress wrote its 2020 and 2021 spending bills, the money allocated toward wall construction could actually be used for that kind of mitigation.

A number of environmental groups are working with Native American nations on a priority list of sections of the wall they want to see come down. The list is still being finalized, Mr. Isacson said.

The debate over pulling down walls comes as Congress is pondering whether to erect its own border wall around itself by fencing off the U.S. Capitol complex.

The acting chief of the U.S. Capitol Police said last month that a fence has long been seen as a necessity to secure the buildings.