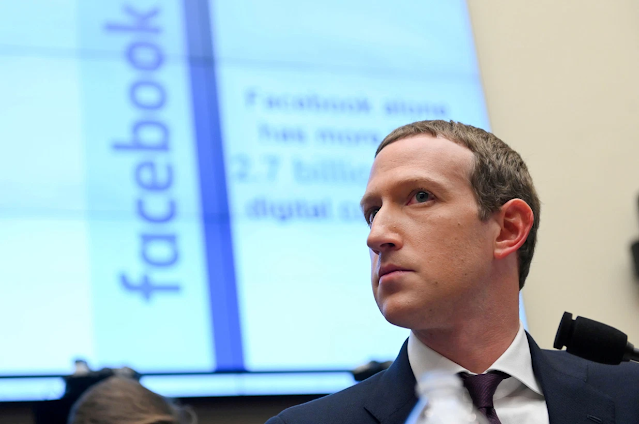 When you see him speak, it’s hard to believe that such a gormless geek as Mark Zuckerberg may be the most powerful person in the free world.

For now, it is conservatives they are silencing and demonizing, in partnership with the Democratic Party.

We already know Silicon Valley leans left, judging by political donations which went almost exclusively to Joe Biden from top social- media executives and accounted for 95 percent of employee contributions, according to Wired.

But the partisan power of Big Tech was laid bare this month when they acted in concert to censor Donald Trump and many of his 74 million voters, and then crushed free speech competitor Parler.

Now Facebook has turbo-charged its woke corporate agenda with a new “vice president of civil rights” — an Obama administration alumnus obsessed with systemic police racism — and a global “oversight board” of retired politicians and human-rights activists paid to rubber stamp its crackdown on conservatives, a k a “domestic terrorists.”

Exclusive video of Facebook staff meetings this month provided by a whistleblower to Project Veritas exposes how power-hungry and convinced of their own moral superiority the company and founder Mark Zuckerberg have become.

On Jan. 21, Zuckerberg explains Facebook’s new “mission,” moving the company away from connecting friends and family to connecting people with “communities” that can “develop our values.”

“The reason for that is . . . being able to rebuild the social fabric in our country and around the world . . . Strong family and friends is important [but] communities . . . help us develop as people and develop our values.”

“President Biden already issued a number of Executive Orders on areas that we as a company care quite deeply about,” he said. “Areas like immigration, preserving DACA, and ending restrictions on travel from Muslim-majority countries, as well as . . . on climate and advancing racial justice and equity.”

Maybe Zuckerberg doesn’t care that Biden’s plans to dismantle border protections in the middle of a pandemic at a time of record unemployment are a catastrophe for the Americans among Facebook’s 1.8 billion customers.

Biden’s mantra of “equity” arguably is worse — a dangerous, Marxist doctrine which means equality of outcome, not equality of opportunity, and which led to millions of deaths in totalitarian regimes in the 20th century.

Whether he understands or not, Zuckerberg is a cheerleader.

“I am looking forward to opportunities where Facebook will be able to work with this administration on some of their top priorities.”

Think how liberals would feel if the largest social-media company in the free world had signed up to the Trump MAGA agenda and systematically silenced his political opponents.

It doesn’t matter which side of politics you are on, this is a chilling abuse of power.
Then Zuckerberg introduced ­Facebook’s first-ever “vice president of civil rights,” Roy Austin, a former Obama administration civil- rights lawyer.

So Facebook orthodoxy will be the unjust and factually inaccurate view of police as systemically racist:

“One thousand people here in the United States are killed by the police each and every year [and] disproportionately those people are black,” said Austin.

“What is different about what happened with ­George Floyd is that 2,000 communities around the country protested . . . and that happened because of social media and Facebook . . . Despite the important work we were doing in the civil rights division and in the [Obama] White House on racial profiling and policing and voting, none of that . . . got the lift these things get when social media is involved.”

As if it isn’t clear by now that a social-media platform which most people use to talk to family and friends has been transformed into a vast left-wing propaganda machine, Zuckerberg explained that his number one priority for the future is to “continue making progress on the big social issues that we and the Internet are at the center of.”

Then, to explain the latest on Facebook’s purging of Trump, Zuckerberg brought in his head of “Global Affairs,” Nick Clegg, to talk to staff.

Clegg, a Europhile, anti-Brexit, anti-populist former British politician, declared that Facebook’s decision to indefinitely suspend the democratically elected American president the day after the Capitol riot “was a very well justified decision . . . you can’t incite violence on our platform.”

Yet the video which got Trump banned did not incite violence, however unseemly it was for him to tell the rioters, “We love you.” The point of it was to tell them to “go home in peace.”

Zuckerberg prefers what he praised as Biden’s “plainspoken style.”

“It just felt very real to me . . . as someone who runs a company with a mission of bringing the world together, I think his focus on unity is exactly what we need to hear . . . I hope that, regardless of where you are on the political spectrum, we all can be rooting for his success.”

So says the boss of all of us.

The Mount Sinai doctor charged with stealing a statue of Christopher Columbus from an elderly neighbor in the name of social justice has been given a slap on the wrist as punishment.

Sean Morrison, 58, who admitted to the theft after being caught on security video last June walking out of his Upper West Side apartment lobby with the statue, was sentenced Wednesday to three shifts in the COVID-19 vaccination clinic of the hospital where he already works, hardly an imposition.

If he does not get in trouble with the law in the next three months, the case will be dismissed and the record will be sealed.

John Cartafalsa died a few weeks later, at age 91, devastated about the loss of his precious statue, which had resided unmolested in his lobby for 30 years.
But his son, John Jr., has written Morrison a scathing letter expressing his disappointment:

“Your actions brought a great deal of pain to my father in the last days of his life . . . You knew that the statue of Christopher Columbus you stole was the possession of an elderly infirm person. You learned that during your first attempt to steal it.

“Your punishment today does not fit the crime. Your apologies and inadequate offers of restitution arrived too late for my father.

Posted by theodore miraldi at 6:41 AM