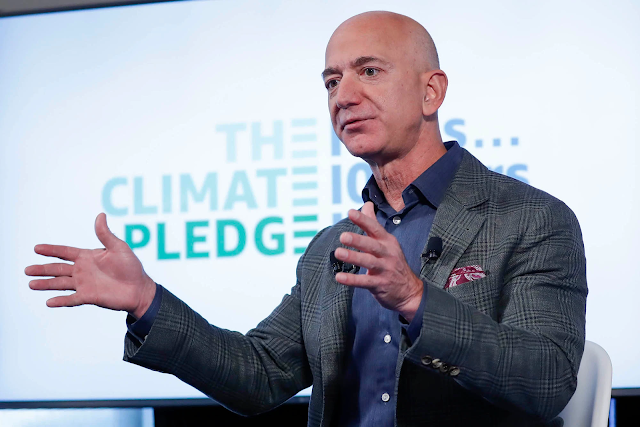 Jeff Bezos is stepping down as CEO of Amazon. AP Photo/Pablo Martinez Monsivais

Billionaire Jeff Bezos is stepping down as CEO of Amazon, the e-commerce empire he founded 27 years ago, he said in a letter to employees.

The world’s second richest man on Tuesday said Andy Jassy, head of Amazon’s cloud computing unit, will take over the reins in the third quarter of 2021. Bezos, 57, will then become executive chair of Amazon’s board, the letter states.

Bezos, who started Amazon selling books out of his garage in 1994, is stepping back from the day-to-day operations on a high note. The company he took public in 1997 at $18 a share now trades at $3,380 a share as Bezos has morphed it into an online retailing giant responsible for a massive 37 percent of all online sales in the US, according to data tracker Statista.

Amazon market valuation surpassed $1 trillion for the first time last January, and its growth only continued to surge — now worth more than $1.6 trillion — as the coronavirus pandemic has forced more people to shop online.

Bezos announcement shocked Wall Street, but Amazon’s stock remained fairly stable, down less than 1 percent in after hours, as investors were reassured by the fact that he will remain involved.

“It’s truly amazing all the successes he’s had and although he’s irreplaceable,” Edward Jones analyst Brian Yarbrough told The Post, “what’s probably holding the stock back is how strong the company is now and that he’s not leaving.”

Bezos said he was stepping down so he could spend more time on other “other passions.” In addition to Amazon, the divorcee owns spaceship exploration company Blue Origin and The Washington Post as well as charitable organizations Day 1 Fund and Bezos Earth Fund.

“As much as I still tap dance into the office, I’m excited about this transition,” said Bezos, who divorced from his wife of 25 years, MacKenzie Bezos, in 2019. MacKenzie, who changed her last name to Scott in 2020, was one of Amazon’s first employees.

Bezos has since been seen publicly with Los Angeles TV reporter Lauren Sanchez, a relationship that resulted in the billionaire clashing with supermarket tabloid The National Enquirer, also in 2019, over X-rated selfies the mag obtained in reporting on the affair.

“I intend to focus my energies and attention on new products and early initiatives,” Bezos said. “Andy is well known inside the company and has been at Amazon almost as long as I have,” Bezos said. “He will be an outstanding leader, and he has my full confidence.”

Jassy joined Amazon in 1997, the year it went public, and has long been rumored to be a potential Bezos successor. He’s led the profitable Amazon Web Services cloud team since its inception.

In a follow-up call with analysts on Tuesday, the company said Bezos will focus on acquisitions in his role as executive chairman, as he has in the past. Jassey will focus on the culture and vision of the company. Amazon has not announced Jassey’s replacement yet.

Jassey’s cloud computing unit has helped supercharge the company’s growth in recent years, but growth has slowed amid increased competition, including from tech rivals Microsoft and Alphabet Inc.’s Google.

Bezos broke the news 90 minutes before Amazon reported its quarterly results, which marked the first time the company surpassed $100 billion in sales.

Bezos’ wealth has soared along with his company’s fortunes. He is currently worth $188 billion, according to Bloomberg. He grabbed the world’s-richest-man title in October 2017, surpassing Microsoft tycoon Bill Gates, but lost it last month to Tesla founder Elon Musk, who’s skyrocketing stock has given him a net worth of $190 billion, Bloomberg said.

Bezos would be richer had it not been for the divorce, which left the ex with 19.7 million of the couple’s Amazon stock shares, a value of more than $38 billion as of July 2019.

Bezos last year sold around $10 billion in his remaining shares to fund Blue Origin and his other interests. And he’s dropped millions in recent years on posh homes in major cities, including New York City, Los Angeles, Washington DC and Miami.

Posted by theodore miraldi at 6:21 AM