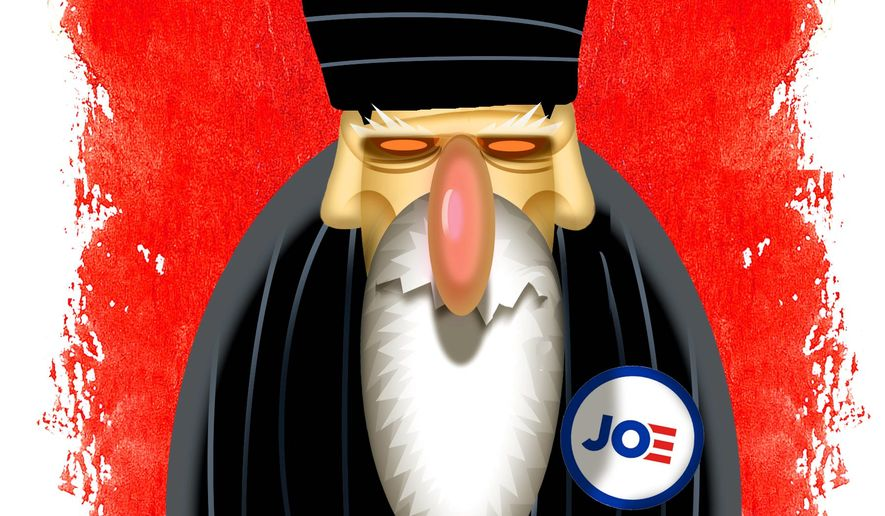 Illustration on Iran’s attitude toward President Biden by Alexander Hunter

Iran’s supreme leader, Ayatollah Ali Khamenei, wasn’t given to smiling for photographs except while in the company of people such as the late Gen. Qassem Soleimani, who was his chief terrorist until a U.S. drone strike terminated his employment with extreme prejudice.

But since President Biden took office, the dour Iranian has often been seen grinning. What’s behind his smile?

One of Mr. Biden’s biggest campaign promises was to rejoin former President Obama’s nuclear weapons deal with Iran, the Joint Comprehensive Plan of Action, which former President Trump scuttled because of the danger it posed to our national security. Mr. Biden, who usually compromises U.S. interests without getting anything in return, has been trolling for some action by Iran that would enable him to paper over rejoining an unimproved JCPOA.

In his Feb. 4 State Department speech, Mr. Biden announced that he was ending any U.S. support for the Saudi’s war with Iranian-backed Houthi rebels in Yemen and was ordering humanitarian aid to be provided the Houthis. That announcement, and Mr. Biden’s cancelling of U.S. arms sales to the Saudis and the United Arab Emirates, were concessions to Iran.

Mr. Biden insists that the U.S. will rejoin the JCPOA if Iran brings itself into compliance with the deal, but Mr. Khamenei insists that won’t happen unless Mr. Biden first cancels all U.S. economic sanctions on Iran. Mr. Khamenei’s contemptuous refusal is a deliberate and calculated demonstration of Iran’s growing confidence in its power.

The most significant prior demonstrations of that confidence were Iran’s bragging to the West that it is enriching uranium in violation of the JCPOA and its recent ballistic missile launch.

Iran announced in January that it was enriching uranium to the 20% level in violation of the JCPOA. Enriching to that level takes more time and money than further enriching to bomb-grade uranium.

Iran’s latest missile launch was conducted by the Iranian Revolutionary Guard Corps which reports directly to Mr. Khamenei. The rocket was solid-fueled, larger than Iran had previously been able to construct. Iran claimed that the missile proved it was ready to launch satellites into orbit, but the same technology enables more distant targets to be attacked.

How is Iran able to afford these expensive ventures?

Mr. Trump’s “maximum pressure” sanctions campaign had, we were told, brought Iran’s economy to its knees. The Iranian economy is, in truth, not as weak as Mr. Trump claimed because it is able to sell an enormous amount of oil to nations such as China and India which ignore our sanctions.

Though estimates of Iranian oil exports differ, Iran reportedly increased its oil exports to about one million barrels per day in November and plans, according to Iranian media, to export 2.3 million barrels per day of oil and gas concentrates beginning in March. The enormous revenue from those exports go to nuclear and missile development, to purchasing new weapons (since the U.N. arms embargo on Iran expired in October) expiration of the U.N. arms embargo on Iran, and to fund international terrorism.

Iranian diplomat Assadolah Assadi was convicted by a Belgian court in early February for conspiring to bomb a 2018 Paris mass meeting of the Iranian dissident group the People’s Mujahedeen of Iran at which Rudy Giuliani, an emissary of Mr. Trump, spoke. The conviction demonstrated, redundantly, Tehran’s commitment to terrorism. Its dedication to achieving nuclear power is no less.

Part of Mr. Obama’s justification for his nuclear weapons deal with Iran was a religious “fatwa,” issued by Mr. Khamenei, prohibiting nuclear weapons. Shortly before Assadi’s conviction was announced, former Iranian diplomat Amir Mousavi said what we already knew: that no fatwa is permanent and Mr. Khamenei’s ban on nuclear weapons could be revoked at any time.

The White House is obviously negotiating with Iran to get it to at least pretend to comply with the JCPOA. Its efforts to bribe Iran into doing so – by ending U.S. support for Saudi operations against the Houthis as well as stopping the arms sales to Saudi Arabia and the UAE – were enough to damage our allies, our credibility and the Abraham Accords, under which the UAE and other Arab states made peace with Israel. But they were not enough to entice Tehran. And then there is Mr. Biden’s evident disdain for Israeli Prime Minister Benjamin Netanyahu.

Mr. Netanyahu, who Mr. Biden personally dislikes, has been one of the strongest and most consistent opponents of the JCPOA. He warned that if the U.S. rejoins the JCPOA, Israel might attack Iran’s nuclear weapons facilities. If, as it appears likely, Mr. Netanyahu is reelected in March, that warning will have to be taken seriously.

Mr. Biden’s actions on Saudi Arabia and the UAE to lure Iran back into the JCPOA have taught Iran to expect more generous offers. Combined with the president’s anti-Israel appointments to the administration, it’s pretty clear why the ayatollah is grinning.

• Jed Babbin, a deputy undersecretary of Defense in the George H.W. Bush administration, is the author of “In the Words of Our Enemies.”

Posted by theodore miraldi at 7:13 PM