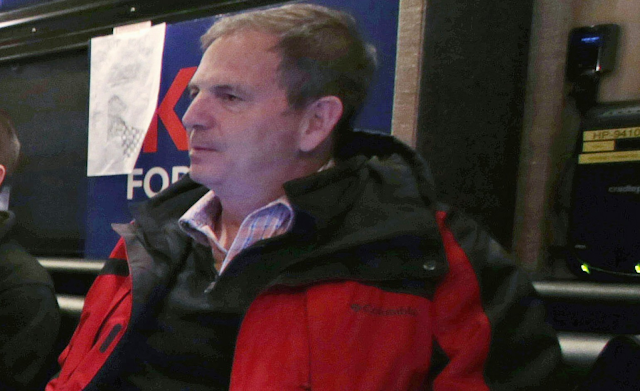 On Friday, Abraham Lincoln's 221st birthday, a dwindling group of Never Trump Republicans were left to survey the ruins of their once-promising organization, named for the 16th president and seemingly done in by a tide of sex, money, and betrayal scandals that would have made Honest Abe cringe.

The Lincoln Project, which just a month ago was awash in cash and planning an ambitious transformation into a media powerhouse, absorbed its latest gut punch Thursday night in a drama that played out on Twitter. The group's account tweeted screenshots of private messages from a journalist in an apparent, and shocking, bid to intimidate other reporters and discredit a flurry of damaging stories.

"Earlier this evening, we became aware that @AmandaBecker of @19thnews was preparing to publish a smear job on the Lincoln Project with the help of @NHJennifer," the account tweeted. "You hear a lot of talk about the hit-jobs in journalism, but rarely do you get to see their origin story. Enjoy."

Attached was a photo of the Twitter inbox of Jennifer Horn, a New Hampshire Republican who left the Lincoln Project last week. Subsequent tweets from the Lincoln Project included communications between Horn and Amanda Becker, with commentary alleging bias on the part of Becker.

Any chance the breach was unsanctioned was dispelled the same night when Lincoln Project's high-profile adviser Rick Wilson chimed in with a since-deleted tweet saying, "Abe hears things."

Another well-known former adviser and Lincoln Project founder, George Conway, was stunned. The attorney and husband of former senior adviser to President Donald Trump Kellyanne Conway tweeted that the leaking of Horn's private messages "looks like on its face to be a violation of federal law and should be taken down immediately."

As damaging and bizarre as the incident was, it only served to accelerate a meltdown already well underway and driven mainly by co-founder John Weaver's disturbing behavior. For almost 15 years, the married father of two had been infamous in small Washington circles for hitting on younger men. The revelations about Weaver, a onetime aide to the late Sen. John McCain, exploded into the spotlight after troubling questions were already being raised about the Lincoln Project's finances.

"Everything you can imagine about the Lincoln Project is true," said one individual who worked with members of the group in the past but asked to remain anonymous because he still consults on GOP campaigns. "It's just amazing it took this long to come out."

Formed in December 2019, the Lincoln Project found it easy to raise money by billing itself as a conservative group dedicated to preventing a second term for Trump. It raised roughly $90 million but spent less than one-third of that on advertisements in the 2020 campaign cycle. It disbursed over $50 million of those funds to insiders, consultants, and longtime Republican operatives, including Wilson and Steve Schmidt.

There have been multiple resignations in recent days. Schmidt, a co-founder who worked on the campaigns of high-profile Republicans, such as former President George W. Bush and the late Sen. John McCain, and announced in December he was registering as a Democrat, resigned from the group's board on Friday. In a statement, Schmidt said he was doing so to "make room for the appointment of a female board member as the first step to reform and professionalize the Lincoln Project."

While Trump was indeed thwarted in his reelection bid, few credited the Lincoln Project, which failed in other efforts to unseat GOP senators in states such as North Carolina, Maine, South Carolina, and Texas. The Biden campaign and its allies deliberately kept their distance from the Lincoln Project and privately scoffed at any suggestion they were instrumental in the November election results.

One GOP consultant said the organization had to have known Weaver was sexually harassing young men, including Lincoln Project interns.

"Of course they knew, I mean, I knew," said one GOP consultant, referring to Weaver's messages with young men where he offered job opportunities in return for sex.

The first publicly documented evidence of Weaver's abuse of power was laid out in a January article titled " The Lincoln Project's Predator," published in The American Conservative. After the New York Times published interviews with 21 men accusing Weaver of inappropriate behavior, Horn resigned.

“John Weaver’s grotesque and inappropriate behavior, coupled with his longstanding deceptions concerning that behavior, are sickening,” she said. “It is clear at this point that my views about how the Lincoln Project’s efforts are managed, and the best way to move the Lincoln Project forward into the future in the wake of these awful events, have diverged.”

“To the men I made uncomfortable through my messages that I viewed as consensual mutual conversations at the time: I am truly sorry,” he wrote. “They were inappropriate and it was because of my failings that this discomfort was brought on you.”

Lincoln Project leadership has pledged to hire an outside investigator "to establish both accountability and best practices going forward for The Lincoln Project."

“The Lincoln Project believes the members of our movement and the victims of John Weaver’s despicable and deceptive behavior are owed the facts, and you will have them,” the organization said in a Thursday night statement. “John Weaver betrayed all of us and you deserve the facts presented independently through a transparent process.”

The Lincoln Project did not respond to a request for comment.

Posted by theodore miraldi at 8:19 AM