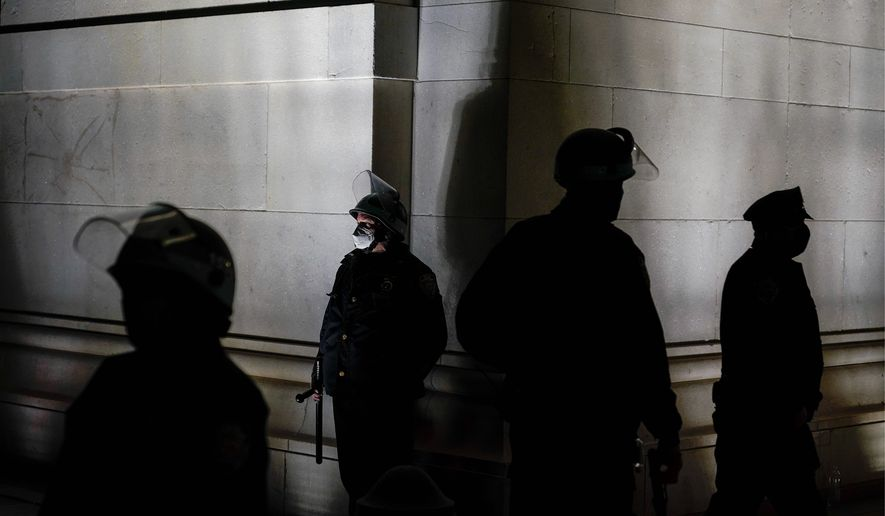 Law enforcement agencies lack a strategy to identify White supremacists lurking in the shadows. Since last summer’s racial justice protests, some police departments have adopted programs to address implicit bias but not to root out                         explicit racism. (Associated Press)

America’s cops are the victims of “McCarthyism from the left,” says a growing chorus of police officers bucking the narrative that White supremacists have infiltrated law enforcement agencies.

While officers concede some White supremacists may have entered their ranks, they say civil rights groups insisting it’s a ticking time bomb have exaggerated those numbers.

How many White supremacists are out there or wearing a badge is impossible to say because we simply don’t have the data, according to analysts.

“The major problem in looking at this issue is that there isn’t a lot of information,” said Brian Michael Jenkins, an expert on domestic terrorism who has testified before Congress on the threat of White supremacists. “You would think this would be a well-researched area, but one has to rely on anecdotal evidence or a study here or there.

“We may never have a national picture of this issue.”

A major hurdle to addressing racial militants in law enforcement is that few people can agree on the definition of White supremacy. Officers who may have made racially inappropriate comments on social media or cracked offensive jokes aren’t necessarily White supremacists.

Police and civil rights groups are unsure where the line should be drawn.

Michael German, a former FBI agent who authored a report on White supremacy in law enforcement, said any effort to tackle the issue must avoid the appearance of unfairness. An individual exposed for telling off-color jokes on social media but who otherwise is a fine police officer could be fired because the racial climate has changed, he said.

“That’s not the guy I’m worried about,” he said. “I’m worried about the guys who are the focus of racial violence incidents over and over again. Typically, when these officers get identified, they are subject of many claims.”

The FBI is not bringing clarity to the debate.

A 2006 FBI report, which was made public last year, warned that White supremacists had penetrated the ranks of law enforcement to gather intelligence and disrupt investigations into activities of White supremacist groups.

The report, however, acknowledged that there is no credible evidence of a systemic effort by White supremacists to recruit law enforcement. It said claims about White supremacist infiltration were based on “sporadic reporting.”

Still, the FBI has instructed its domestic terrorism investigators to modify how they put information into its Terrorist Screening Center watch list so police officers searching for themselves or White supremacist associates could not learn whether they were under FBI scrutiny.

“It is a pretty significant clue that White supremacy is so prevalent in law enforcement that the FBI is actually changing the way it does things,” Mr. German said.

Police groups say there is so little information that it’s nearly impossible for the FBI and others to draw firm conclusions about officers’ ties to radical racist ideology.

“We don’t even know for sure how many law enforcement officers are out there, and that’s basic information,” said Jim Pasco, executive director of the National Fraternal Order of Police. “So anyone who asserts that he or she has evidence that there has been this kind of infiltration in law enforcement needs to put up or shut up.”

The attack on the U.S. Capitol last month by a mob of pro-Trump protesters, which included some law enforcement officers, reignited concerns about whether racist militants have co-opted police forces.

Politicians, press and civil rights groups accused U.S. Capitol Police officers of standing by and even letting rioters inside the building. Some pointed to videos appearing to show officers taking selfies with rioters.

“The Capitol Police is the perfect example where there seems to be some level of cooperation or lack of animosity towards this group that is being incredibly violent towards them and you wonder what is going on,” Mr. German said.

Mr. Pasco, however, said there is no evidence that officers sympathized with the rioters. Those making such claims, he said, should say it to the officers “who got their asses kicked by White supremacists who verbally, physically and emotionally abused them in every way.”

“Saying police wouldn’t have handled the riot that way if it were Black Lives Matter makes the assumption that police officers do whatever the heck they please,” he said. “They don’t decide when to be aggressive or when to be passive. They are told what to do, and they do it.”

These types of accusations put the onus on officers to disprove that they have racist motivations for their actions.

“It’s McCarthyism from the left,” said Mr. Pasco. “It’s the classic case of having to prove a negative.”

Other incidents also show that racism is often in the eye of the beholder.

Residents said racism was the reason for the inaction, and Mr. German cited the incident in his report as an example of racial bias among police.

Philadelphia police said they didn’t have enough officers to disperse the crowd and that “carrying a bat is not a crime.”

Former police officers and analysts say there could be a slew of reasons why the officers didn’t act, including laziness and maintaining a tactical advantage by keeping the mob in one place.

“When you look at some of the public reporting of these incidents and start digging into them in greater detail, it becomes a hell of a lot more complicated,” Mr. Jenkins said.

Several officers across the country were suspended by their departments this summer for wearing logos of far-right militant groups, including the Three Percenters and Oath Keepers, while on duty.

Members of those groups were among those who stormed the U.S. Capitol on Jan. 6.

Community activists demanded an immediate investigation into those officers.

Francis Neely, a retired agent of the Bureau of Alcohol, Tobacco, Firearms and Explosives, said those officers should not have been wearing those logos. He said such infractions can be resolved easily because every department has disciplinary procedures for uniform offenses.

In 2019, a Michigan police officer was fired after prospective homebuyers reported that he displayed Confederate flags and a Ku Klux Klan application in his home. An internal police investigation found that the officer ticketed Black drivers at rates higher than the demographic for his community.

That same investigation also concluded that the officer was not a member of the Klan and had not shown racial bias on the job.

He was fired after the department said the community had lost faith in him.

Some clear-cut evidence of White supremacy among law enforcement has emerged. In the 1990s, a group of California residents filed a civil rights lawsuit against a group of suburban Los Angeles County sheriff’s deputies. A federal judge overseeing the case labeled the group “a neo-Nazi White supremacist gang.” In 1996, the county paid $9 million in settlements after concluding that the gang engaged in racially motivated violence.

In 2005, a Nebraska state trooper was fired for participating in a members-only Klan chat room.

“Unfortunately, the police are pooling from Americans and within that pool are a number of people with racist viewpoints,” Mr. German said.

Despite the concerns, law enforcement agencies lack a strategy to identify and root out White supremacist police. Since last summer’s racial justice protests, some police departments have adopted programs to address implicit bias but none has developed a way to combat explicit racism.

Analysts say a cookie-cutter approach won’t work because the issues are too thorny to resolve with simple rules. Some civil rights groups floated the idea of firing officers who belong to certain groups.

An even bigger question is how departments deal with someone who may have attended a Klan meeting or said something racially insensitive in an online post 15 years before they joined the force.

Mr. German said the Justice Department needs to step in and create a national strategy to address the problem while listening to concerns that some police may be unfairly targeted.

Others, including President Biden, called for a national registry of officers who have been dismissed from their jobs and the reasons for their firings. Any department that hires an officer who was fired for racial offenses would lose its federal funding.

Mr. Pasco said America is treading on a slippery slope for civil liberties.

“The one thing that all police officers agree on is that there seems to be a trend toward throwing away the civil rights of police officers, including the right of due process and the right to confront accusers,” he said.