Rand Paul points to examples of 'incitement' colleagues in Congress 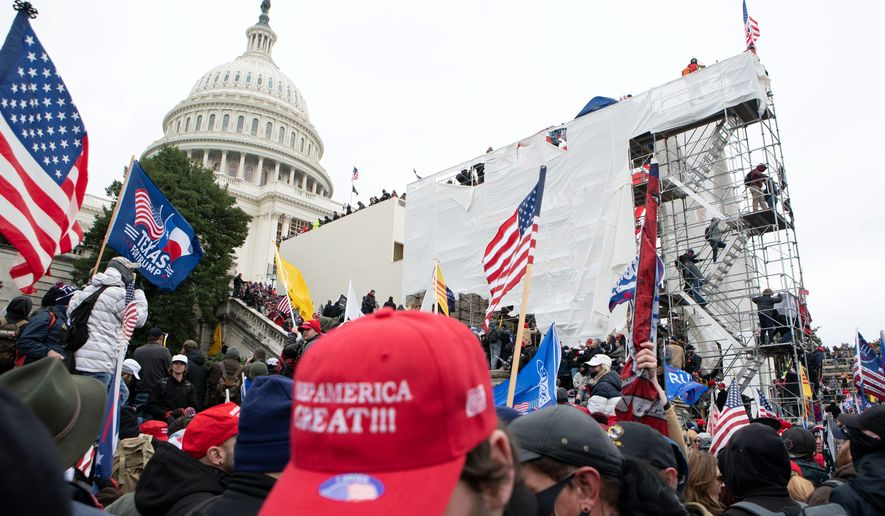 Expect to hear plenty about inflammatory statements during the Senate impeachment trial beginning Tuesday, and not just those from former President Donald Trump.

On the theory that the best defense is a good offense, the Trump legal team plans to counter the House prosecution’s charge that Mr. Trump incited the Jan. 6 attack on the U.S. Capitol with examples of rhetorical excess from leading Democrats targeting the Trump administration.

Sen. Rand Paul, Kentucky Republican, said Sunday that if “incitement” is the new standard, then there should be a long line of Democrats waiting to be impeached after the Trump trial is over, starting with Senate Majority Leader Charles E. Schumer.

“I opposed the notion, which I think was a misguided notion, of voting to overturn the election either with Congress or with the vice president,” Mr. Paul said on “Fox News Sunday.” “But I think if we are going to criminalize speech and somehow impeach everybody who says, ‘Oh, go fight to hear your voices heard,’ really we ought to impeach Chuck Schumer then.”

He cited Mr. Schumer’s March 4 rally in front of the Supreme Court in which the New York Democrat said that Justices Neil M. Gorsuch and Brett M. Kavanaugh would “pay the price” if they ruled against abortion access, prompting a rare rebuke from Chief Justice John G. Roberts Jr., who called the comments “dangerous.”

Rep. Maxine Waters, California Democrat, urged her supporters at a 2018 to harass Trump officials whenever they saw them in public. Rep. Ilhan Omar, Minnesota Democrat, retweeted in 2019 a post lauding Mr. Paul’s neighbor for attacking the senator in 2017.

Countering the double-standard contention was Sen. Christopher Murphy, Connecticut Democrat, who said there was a big difference between the inflammatory Democratic statements and Mr. Trump’s fiery speech at the rally immediately before the rioting.

“There is no comparison,” said Mr. Murphy. “This was an effort to overturn an election, in and of itself an unconstitutional endeavor. This was a crowd of tens of thousands of people. The president had access to intelligence to tell him that there were individuals there who were intending to storm the Capitol.”

As rioters began pouring into the Capitol, “the president had the ability to turn them around, and he didn’t,” Mr. Murphy said. “The circumstances are completely different.”

Not as far as the Trump defense team is concerned. Attorney Bruce Castor indicated Friday that onlookers can expect a video montage featuring the Democrats’ greatest hits juxtaposed against an array of nationwide protest violence last year that included attacks on federal courthouses and immigration facilities.

“Many of them in Washington are using really the most inflammatory rhetoric possible to use. And certainly there would be no suggestion that they did anything to incite any of the actions,” Mr. Castor told Fox host Laura Ingraham.

On the other hand, he said, “when you have the president of the United States give a speech and says that you should peacefully make your thinking known to the people in Congress, he’s all of a sudden a villain.”

While the specter of dueling videos, one blaming violence on the political left, the other on the right, promises to keep the proceedings interesting, Senate Republicans have dismissed the spectacle as a waste of time. The chances of Mr. Trump being convicted are “zero,” Mr. Paul said.

‘Outcome not in doubt’

The Senate forecast its decision in a Jan. 23 vote against a motion on the impeachment’s constitutionality. The motion failed on a 55-45 bote, far short of the two-thirds majority needed to convict.

“We’ve never impeached a president once they’re out of office. I think this is a very bad idea,” Mr. Graham said on CBS’s “Face the Nation.” “Forty-five-plus Republicans are going to vote early on that it’s unconstitutional. It’s not a question of how the trial ends. It’s a question of when it ends. Republicans are going to view this as an unconstitutional exercise.”

He argued that the process is unconstitutional because Mr. Trump is no longer in office and noted that Chief Justice Roberts will not preside over the trial for that reason.

“The Constitution, I think, is being flagrantly violated because, when it comes to Trump, there seems to be no end to all of this,” said Mr. Graham. “So, the trial is going to result in an acquittal.”

Mr. Murphy disagreed. “I come to a different judgment. I think that that clause that gives Congress the responsibility to deny an official future office requires us to take this step even though the president has left office.”

The House voted last month in favor of one article of impeachment for “incitement of insurrection,” with 10 Republicans joining all Democrats.

Holding out hope for a conviction was Rep. Adam B. Schiff, California Democrat, who said Sunday that Mr. Trump lost the election, refused to accept the results, “spread lies” and “then incited a violent mob to attack the Capitol.”

“If this is not impeachable, nothing is,” tweeted Mr. Schiff. “If he is not disqualified from future office and runs again, he will put the country through hell. Again. He must be convicted.”

While Republicans have accused House Democrats of rushing through the second impeachment without holding hearings or calling witnesses, Mr. Schiff said, there was “a real sense of urgency.”

“[T]he President had just incited a mob that attacked the Capitol and resulted in the deaths of five people,” Mr. Schiff said on NBC’s “Meet the Press.” “And we felt in the House, as well as 10 of the Republicans, that every day he remained in office he was a danger to the country.”

While the Senate appeared to broadcast its decision in last month’s vote, Sen. Bill Cassidy, Louisiana Republican, said the trial could change some minds.

“I think it’s important to understand the nature of that vote. It was called two hours before it,” Mr. Cassidy said. “There was no debate and no explanation from either side. It was a vote in a moment of time. And so, based upon what senators knew at that point and felt at that point, they then voted.”

At this point, however, “we will now have, hopefully, presentations from both sides, and we will consider the evidence as impartial jurors,” Mr. Cassidy said.

Sen. Patrick J. Toomey of Pennsylvania was one of the Senate Republicans who voted in favor of the impeachment’s constitutionality.

“I disagreed with [the Republicans’] assessment. I think it is constitutional,” Mr. Toomey said on CNN’s “State of the Union.” “I think it’s clearly constitutional to conduct a Senate trial with respect to an impeachment. In this case, the impeachment occurred prior to the president’s leaving office.”

He said it is “very unlikely” that the Senate would vote to convict, but “my job is going to be to listen to both sides of this, evaluate the arguments and make a decision.”

Mr. Paul predicted that years of anti-Trump vitriol would come back to haunt the Democrats.

“You’ll probably see comments from Rep. Omar wishing and celebrating the violence that happened to me when I had six ribs broken and part of my lung removed,” Mr. Paul said. “I think you’re going to see all of this, and people are going to have to judge for themselves: Are we going to impeach and potentially criminally prosecute people for political speech when they say, get up and fight for your country, let your voices be heard?”

• Alex Swoyer contributed to this report.

Posted by theodore miraldi at 7:32 AM