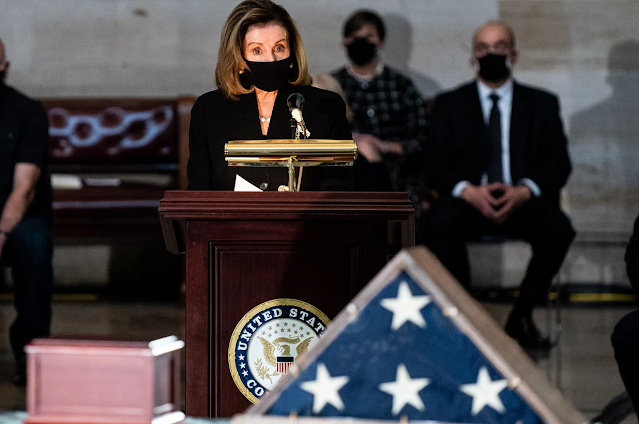 Nancy Pelosi took hypocrisy to new heights during the memorial for the police officer who died after the Capitol riots — and that’s saying something, for her.

The newfound faux reverence for law enforcement from the House speaker and her “defund the police” comrades after cheering on and inciting violence against cops most of last year is grotesque.

Despite Pelosi’s nauseating insincerity as she presided over the two-day commemoration of Brian Sicknick, the dignity and grace of his grieving parents and police colleagues mercifully elevated the honors high above tawdry political opportunism.

Because, of course, what else is it but cynical opportunism of ­Pelosi to wait 27 days after Sicknick’s death to offer his family the opportunity to bury him with full honors, less than a week before her second impeachment show trial of Donald Trump hits the Senate.

It’s for the same reason Pelosi mutters “the enemy within” about suspected Trump supporters, whether Republican colleagues or the thousands of National Guardsmen she keeps in the freezing cold as human props around the Capitol to traumatize its occupants and ­remind the world of the horrors of Trump.

Her apprentice drama queen, ­Alexandria Ocasio-Cortez, even accused Sen. Ted Cruz of trying to murder her that day, labeled Republican members of Congress insurrectionists and released hours of Instagram videos reliving her terror as a non-existent mob banged on her door and forced her to hide in a bathroom, even though her office is in a separate building from the Capitol, as her near-neighbor, Rep. Nancy Mace, pointed out in a tweet. “My office is 2 doors down. Insurrectionists never stormed our hallway.”

Ocasio-Cortez must not have received Pelosi’s new pro-cop talking points because she accused the Capitol officer who had come to evacuate her — “a white man” — of breaking into her office with malign intent. She claimed he looked at her “with a tremendous amount of anger and hostility.”

Perhaps sensing she had gone too far, she then revealed that she once suffered a sexual assault and the Capitol riot had prompted a form of PTSD.

To be fair, maybe she did feel traumatized that day. But her childish theatrics serve the useful purpose of bolstering the Dems’ false narrative about what actually ­happened on Jan. 6.

No one is defending violent rioters, and they are being rounded up with ruthless efficiency. But it is insane and dangerous to exaggerate the events of that day into a jihad against fictional “domestic terrorists,” “white supremacists” and “violent insurrectionists” as a way to indict the Republican Party and its 74.2 million Trump voters unless they renounce and all his works.

So, forgive me if I wasn’t convinced of Pelosi’s sincerity Wednesday in the Capitol as she gravely intoned, “We carry Brian in our hearts . . . We must be vigilant of what President Lincoln referred to as the harsh artillery of time.”

It’s the same tone she uses when invoking Catholicism while supporting abortion or claiming to “pray” for the president she spent every waking moment sabotaging, or when she delayed COVID relief and said everything she did was “for the children” or when she showed up at the Capitol wearing Kente cloth after George Floyd’s death.

No, Pelosi embraced Wednesday’s theater deliberately to set the stage for the Senate impeachment and wedge Republicans by pulling at their core beliefs of patriotism, God and love of law enforcement.

But few are fooled.

The cause of Sicknick’s death in hospital at 9:30 p.m. the day after the Capitol riot still has not been publicly confirmed, despite ­Pelosi’s efforts to pin it on Trump supporters.

At the time, Capitol Police said in a statement that he was injured “while physically engaging with protesters. He returned to his division office and collapsed.”

Unnamed sources told ABC that Sicknick’s death “was driven by a medical condition.”

Ken Sicknick told ProPublica his brother had texted him the evening of the riots to say: “ ‘I got pepper-sprayed twice,’ and he was in good shape.”

Sicknick’s family issued a statement: “The direct causes of Brian’s injuries remain unknown and our family asks the public and the press to respect our wishes in not making Brian’s passing a political issue . . . Brian is a hero and that is what we would like people to ­remember.”

But it was too late. Malicious ­actors were determined to politicize the death of a hero.

Homicide police and the FBI opened a murder investigation but so far have come up empty-handed.

In other words, there are too many unknowns at present for anyone definitively to say that Sicknick was murdered by rioters.

In any case, Sicknick himself was a Trump supporter who reportedly sent a letter to his local Democratic congressman opposing ­Pelosi’s first impeachment.

It is a dark irony that his death would be used by Pelosi to dramatize the second Trump impeachment.

Where’s the justice for Ashli?

The one participant we know who was directly killed in the Capitol riot last month was Ashli Babbitt, the 35-year-old Trump supporter and Air Force veteran shot by a Capitol Police officer as she climbed through a broken window into the Speaker’s Lobby.

That officer, we learned this week, likely will not be charged with any crimes in connection with her death, after a preliminary investigation by the Washington Metropolitan Police.

Unlike in other police shootings, his identity has been kept secret.

But veteran NYPD officers are calling it a “bad shooting,” knowing the strict protocols around the use of deadly force by police.

Babbitt was unarmed, and the officer was not threatened or facing deadly physical force. In any other police force in the US, he would face criminal investigation and potential charges.

Is there a different standard of justice for Trump voters?

Posted by theodore miraldi at 5:18 AM