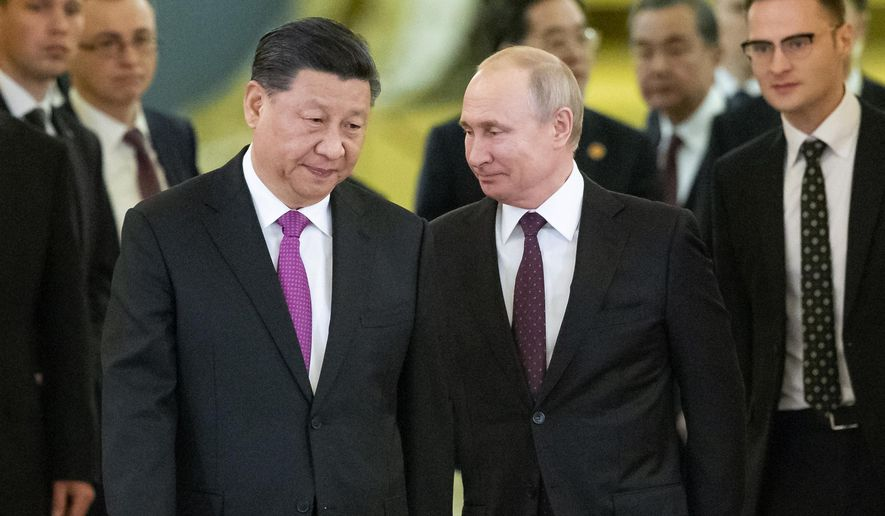 The United States must be ready for a nuclear war with China or Russia and seek new ways to deter both countries’ use of newly acquired advanced strategic weapons, the commander of the U.S. Strategic Command is warning in a major new review of the global balance of nuclear forces.

Adm. Charles Richard, writing in the current issue of the U.S. Naval Institute journal Proceedings, offered a blunt and detailed assessment that the luxury of living in a post-Cold War era when direct armed conflict with a rival nuclear power was not possible is over.

“There is a real possibility that a regional crisis with Russia or China could escalate quickly to a conflict involving nuclear weapons, if they perceived a conventional loss would threaten the regime or state,” the four-star admiral wrote.

The Pentagon must shift from a principal assumption that nuclear weapons’ use is nearly impossible to “nuclear employment is a very real possibility,” he urged in the new survey.

Government and military leaders need to better understand the new dangers of nuclear conflict and fashion new concepts of deterrence and — if needed — nuclear war-fighting strategies.

The deployment of advanced strategic forces by China and Russia calls for greater action by the United States to bolster deterrence in the face of new threats. Deterring both nations through crises or ultimately nuclear war is being tested in ways not seen before, Adm. Richard said.

“Until we, as a [Defense] Department, come to understand, if not accept, what we are facing and what should be done about it, we run the risk of developing plans we cannot execute and procuring capabilities that will not deliver desired outcomes,” Adm. Richard argued. “In the absence of change, we are on the path, once again, to prepare for the conflict we prefer, instead of one we are likely to face.”

Moscow and Beijing in recent years have invested in nuclear and strategic capabilities designed to constrain U.S. actions, test alliances and “escalate past us — to include nuclear use,” Adm. Richard said.

In an interview, Adm. Richard said the article, written in September, is meant to energize Navy leaders regarding the rapidly changing threat environment and how to provide the best military advice to civilian leaders.

“In this new era of competition, this will be the first time in our nation’s history that we will have to face two nuclear-capable peers by the end of this decade,” he told The Washington Times.

“We’ve assumed strategic deterrence will hold in the future, but as the threat environment changes, this may not be the case,” he added. “We need to be ready to respond to cross-domain threats to ensure the security of our nation and allies by thinking holistically about strategic deterrence in the 21st century.”

Strategic nuclear competition should be viewed as maintaining relative advantage over competitors, with the United States seeking to play the dominant role.

Several strategies and concepts have been drawn up to address the new challenges. But few of them offer ways on how to structure the balance to preserve the U.S. edge, he added.

“As a department, we are wise to establish unity of effort in addressing Russian and Chinese aggression, while understanding they require different deterrence approaches, and incorporating that thinking into professional military education at the earliest opportunity,” Adm. Richard said.

Strategic Command has begun to rethink deterrence and revised an assessment called “Risk of Strategic Deterrence Failure” to help.

The Pentagon also needs to improve the procurement of new strategic weapons and systems and to bolster command-and-control systems and cyber capabilities.

“We must adapt to today’s strategic environment by understanding our opponents’ threats and their decision calculus,” Adm. Richard said. “We must also accept the gauntlet of great power competition with our nuclear-capable peers.”

Ultimately, understanding the threat is key.

“Until we come to a broad understanding of what the threat is and what to do about it, we risk suffering embarrassment — or perhaps worse —at the hands of our adversaries,” he said.

Adm. Richard said China’s buildup of nuclear forces has placed Beijing on a path to be a “strategic peer” of the U.S. military.

Beijing’s forces “should not be mistaken as a ‘lesser included’ case.

“Like Russia, [China] acts aggressively to challenge democratic values and shape the global economic order to its benefit,” he said.

“China continues to make technological leaps in capabilities in every domain,” he warned.

“Across its conventional weapons systems, it continues to invest significant resources in hypersonic and advanced missile systems, as well as to expand its space and counter-space capabilities.”

Space systems now provide China with command and control of forces around the world and better intelligence. China also has deployed multiple weapons systems on disputed islands it created in the South China Sea.

China is investing heavily in nuclear forces and its two nuclear legs — land-based ICBMs and submarine-launched missiles will soon become a triad as China is nearing completion of a new long-range bomber.

Chinese strategic forces also have built new early warning and command-and-control capabilities while improving force readiness. The Chinese stockpile of nuclear is also expanding beyond recent estimates of a doubling in size, the admiral said.

“China’s nuclear weapons stockpile is expected to double — if not triple or quadruple — over the next decade,” Adm. Richard said.

China’s large-scale buildup of missiles and other strategic weapons are “inconsistent” with its declared policy of not being the first to use nuclear arms in a conflict.

“While [China] has maintained a ‘no first use’ policy since the 1960s — contending it will never use a nuclear weapon first — its buildup of advanced capabilities should give us pause,” Adm. Richard said. “This policy could change in the blink of an eye.

Additionally, China is building forces and capabilities while “operating in a manner inconsistent with a minimum deterrent strategy, giving it a full range of options, including limited use [of nuclear arms] and a first-strike capability.”

Adm. Richard bristles at critics who say the Pentagon is stuck in the Cold War, arguing the real challenge is the fact that “we no longer view our environment through the lens of potential enemy nuclear employment.”

“Our recent experiences against non-nuclear-armed adversaries have allowed us to believe nuclear use is impossible and not worthy of attention,” he said. “At the U.S. Strategic Command, we assess the probability of nuclear use is low, but not ‘impossible,’ particularly in a crisis and as our nuclear-armed adversaries continue to build capability and exert themselves globally.”

A nuclear conflict would have catastrophic consequences and must be assessed.

The U.S. focus on counterterrorism since the September 11 attacks has come as both China and Russia have rushed to build up their nuclear arsenals.

He charged that China and Russia also have exploited the global pandemic to advance national agendas.

“These behaviors are destabilizing, and if left unchecked, increase the risk of great-power crisis or conflict,” he said. “We must actively compete to hold their aggression in check; ceding to their initiatives risks reinforcing their perceptions that the United States is unwilling or unable to respond, which could further embolden them.”

American allies also may misinterpret U.S. inaction as an unwillingness or inability to play a leadership role in the strategic competition.

Passivity in the face of “sobering” Chinese and Russian strategic threats could result in denying the United States the ability for strategic power projection, a key U.S. advantage, he said.

An adversary action without a U.S. response would force the United States to accept the action or employ military force to reset the status quo or to create a new U.S. “normal.”

The admiral said Russia for more than a decade has been “aggressively modernizing” its nuclear forces with new medium- and short-range missiles not limited by treaties.

Moscow’s modernization is 70 percent complete and will be finished in a few years, the admiral said.

Russian President Vladimir Putin announced in 2014 during the military takeover of Ukraine’s Crimea the power of Moscow’s nuclear arsenal. The threats were made in both “word and deed” to warn against any challenges to the aggression, he said.

Russian forces also have engaged in provocative military activities against U.S. aircraft and ships, and launched cyberattacks, like the recently intrusions detected on government networks.

“Together, these actions demonstrate Russia’s willingness to compete aggressively and ignore international norms,” he said.

Posted by theodore miraldi at 7:31 AM