NYC Public School Asks Parents to ‘REFLECT’ on Their ‘WHITENESS’ 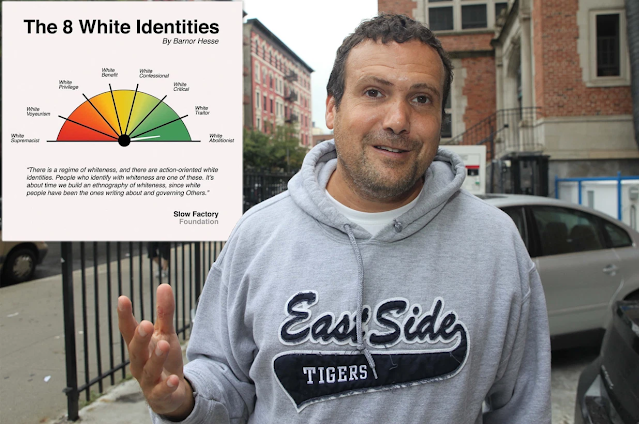 A city public school principal is asking parents to “reflect” on their “whiteness” — passing out literature that extols “white traitors’’ who “dismantle institutions,” education officials confirmed to The Post on Tuesday.

The “woke’’ offensive at the East Side Community School in Manhattan features a ranking list titled “The 8 White Identities,” which ranges from “White Supremacist’’ to “White Abolitionist.”

The curriculum, written by Barnor Hesse, an associate professor of African American studies at Northwestern University in Illinois, claims, “There is a regime of whiteness, and there are action-oriented white identities.

“People who identify with whiteness are one of these,’’ Hesse writes above the eight-point list.

“It’s about time we build an ethnography of whiteness, since white people have been the ones writing about and governing Others,’’ Hesse adds.

In between the two extreme “identities” of supremacist and abolitionist are such categories as “White Voyeurism’’ — defined as “wouldn’t challenge a white supremacist, desires non-whiteness because it’s interesting’’ — and “White Privilege,’’ or “sympathetic to a set of issues but only privately; won’t speak/act in solidarity publicly because benefitting through whiteness in public (some POC are in this category as well).”

The handout was accompanied by a color-coordinated meter with the red zone on the left titled “White Supremacist’’ and the green zone on the far right labeled “White Abolitionist.”

A New York City Department of Education official told The Post that some parents at the school, which caters to sixth- through 12-graders on the Lower East Side, first shared the material with staff.

The principal then disseminated it to every parent “as part of a series of materials meant for reflection” and as “food for thought,” the official said.

A DOE rep said in a statement, “Anti-racism and the celebration of diversity is at the core of our work on behalf of the young people of New York City, and the East Side Community School’s students, parents and staff partner together to advance equity in their community.

“The document in question was shared with the school by parents as a part of ongoing anti-racist work in the school community and is one of many resources the schools utilizes.”

The spokesman said school workers are now being threatened over the missive.

“Our staff are now being targeted with vile racist, anti-Semitic and homophobic slurs and degrading language from people outside of their school and nothing justifies the abuse directed at our educators,” the rep said.

Christopher Rufo of the Discovery Institute wrote in a tweet that included a posting of the curriculum, “This is the new language of public education.”

The dissemination of Hesse’s literature to parents comes as the DOE and schools chancellor Richard Carranza have pushed to eliminate what they call current administrators’ “white-supremacy culture.’’

The administration has embraced “anti-bias training” across the board, with staffers forced to attend slide-show presentations denouncing the current culture’s “paternalism” and “power hoarding” — while getting sued over Carranza’s alleged creation of “an environment which is hostile toward whites.”

“If you find this hostile, or unnerving, it’s because you are fearing the loss of power and advantage that your skin colour has afforded you. It’s an agenda to bring true equality,” a Twitter user fired at Rufo over Hesse’s chart.

But another writer said, “THIS is what a public school spends time and money on? Anti-racism like this is a poison.”

The racial makeup of the student body at East Side Community was 55 percent Hispanic, 18 percent white, 15 percent black, 10 percent Asian and 2 percent other during the last school year.

Federman made headlines in 2007 when he tried to prevent the arrest of a student accused of punching a school safety agent.  The principal was arrested after scuffling with another agent during the fracas but returned to school later that day.

Posted by theodore miraldi at 8:06 AM