*Empty carcasses imprisoned by neglect and the Lust for Power. This is how our enemies will defeat us...and who is pushing Legalization of Drugs ... DEMOCRATS!!! The Friends of Pushers and Cartels! ... tmiraldi

COMING TO CITY NEAR YOU! 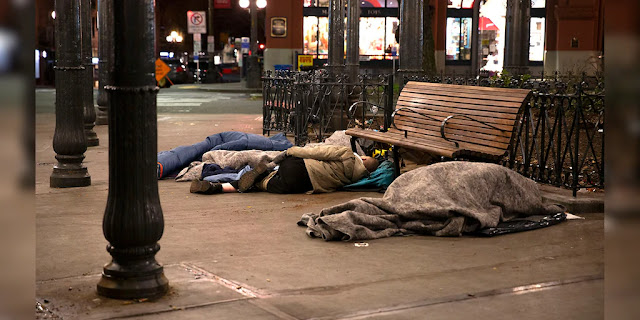 Seattle’s permissive drug policies ravaged the city and devastated an already vulnerable homeless population. It led to more crime and killed an alarming number of people.

But now it may go statewide if Democrats get their way. With that kind of momentum, the movement to legalize drugs will be unstoppable in most blue states. And it’ll inspire similar movements in red states, too.

On the heels of Oregon’s voter-approved decriminalization law, Washington may one-up its neighbors with radical legislation that effectively legalizes all drugs that will fundamentally alter the entire state.

The Pathways to Recovery Act is pitched as a way to help addicts. But it will do the opposite; it will kill them. What’s worse, while it focuses almost exclusively on the addict, it ignores the impacts drug culture has on our communities.

I live in Seattle and have seen first-hand what the drug crisis can do. It’s commonplace to find used needles on sidewalks on the walk to work. You’re not shocked to see the homeless shooting up on buses. And you must walk around rows of addicts resembling zombies as they block storefronts in business districts. You don’t want this to spread.

The proposed legislation eliminates criminal penalties for personal possession of drugs like heroin, cocaine, meth and fentanyl. Unlike in Oregon, where law enforcement confiscates the drugs and an addict is given a $100 fine if they turn down addiction services, the Washington law neither requires drug confiscation nor any financial penalty. The deadly addiction is consequence- and judgement-free.

Only, we are doing this now, right where the senator lives. It’s been an unmitigated and deadly disaster.

Seattle and King County decriminalized personal possession years ago, claiming criminalizing addiction doesn’t work. Since then, city streets have been flooded with drugs and overdoses have skyrocketed along with crime.

Federal and local law enforcement have worked overtime with months-long investigations, arresting dozens with ties to violent Mexican cartels, to stop the flow of drugs into the Puget Sound. But drugs are still making its way to customers with dealers exploiting the lax drug laws.

Making matters worse, officers can’t pressure addicts for intel on drug dealers because addicts know they won’t go to jail for not cooperating. This makes investigations into drug dealers even more difficult. This keeps degenerate drug dealers on the streets and continues the cycle of addiction.

Many addicts are homeless, making it more difficult getting them off the streets. Driving the Seattle area’s crisis is the 64% of the chronically homeless who self-report an addiction. And it’s impacting quality of life for everyone else.

For a bill ostensibly about treatment, it lacks concrete details to treat addicts.

To feed their addiction, the homeless often turn to crime. Break-ins and theft are common, with stolen goods sold openly in parks and the profits used to buy drugs. Families can’t use parks, it’s unsafe to leave your car in parts of the city, and homeless addicts assault and even murder innocent Seattleites.

Fed up residents are fleeing the high rents for more affordable areas with fewer of these issues. But with the Pathways to Recovery Act, they won’t be able to escape it in Washington.

As Democrats prepare a Feb. 12 committee hearing on the bill, proponents argue it’s always wrong to criminalize a behavioral addiction and "trauma of incarceration will not produce a willingness to change."

But rejecting a drug permissive culture doesn’t mean you return to throwing every addict in jail. We need a reasonable approach that doesn’t shut policing out of the equation. And yes, the threat of jail does stop some from heading down the path of becoming an addict because it stops some from making that first attempt to illegally purchase street drugs.

The tragic reality is that on the very day Democrats introduced the Pathways to Recovery Act, the University of Washington School of Medicine released a report showing a "stunning" surge in fentanyl-involved overdose deaths in the Seattle region. We’re told the legislation will help address these kinds of surges. Unlike all the past promises from local leaders to tackle the issue, this time they promise it will work. Except, the legislation is missing the plan.

For a bill ostensibly about treatment, it lacks concrete details to treat addicts. Instead of funding a data-backed program, the legislation merely offers aspirational talking points about what a plan "should" offer, leaving others to do the work.

It asks the Washington State Health Care Authority (HCA) to come up with a treatment plan for the legislature to approve. It should consider "creative" ways to get addicts into treatment. It should include "potential" community services and recovery support for housing and job training. It should offer assistance to criminal addicts. It must be accomplished through an "equitable" and "antiracism" lens, of course.

The HCA must utilize two committees for guidance, one of which must have at least 39, racially diverse members on it. Oh, and the plan should somehow be crafted by Dec. 1, 2021, then implemented and contracted for a start date of Dec. 1, 2022 because these things always proceed quickly.

The legislation doesn’t even define personal possession amounts. Instead, it creates another committee, which must include an active illicit drug user to help define the amounts.

Shouldn’t all of this come before legislation and decriminalization? Not if the intent is to simply legalize drugs and then offer free treatment for the addicts the legislation creates. That’s honestly what this bill seems to do, merely wrapped in the auspices of a just goal of helping addicts.

It warns Washingtonians against stigmatizing addicts, but it confuses the person with the act. We should stigmatize illicit drug use. Shooting up heroin or popping Oxycodone should be condemned because we know its impact. And despite the current anti-police agenda of Democrats, law enforcement has a role to play.

More importantly, we’ve already seen the results drug legalization has had on the state’s biggest city. Why would we want to bring that misery statewide? Blind ideology.

Posted by theodore miraldi at 8:10 AM