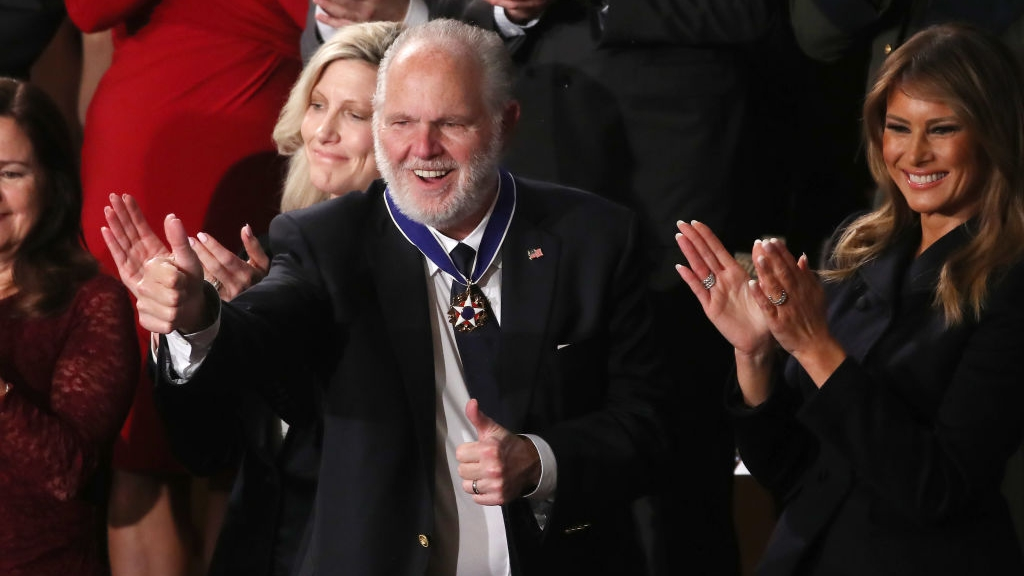 Limbaugh is considered one of the most influential media figures in American history and has played a consequential role in conservative politics since "The Rush Limbaugh Show" began in 1988. Perched behind his Golden EIB (Excellence in Broadcasting) Microphone, Limbaugh spent over three decades as arguably both the most beloved and polarizing person in American media.

The program that began 33 years ago on national syndication with only 56 radio stations grew to be the most listened-to radio show in the United States, airing on more than 600 stations, according to the show’s website. Up to 27 million people tuned in on a weekly basis and Limbaugh has lovingly referred to his passionate fan base as "Dittoheads," as they would often say "ditto" when agreeing with the iconic radio host.

In his final radio broadcast of 2020, Limbaugh thanked his listeners and supporters, revealing at the time that he had outlived his prognosis. 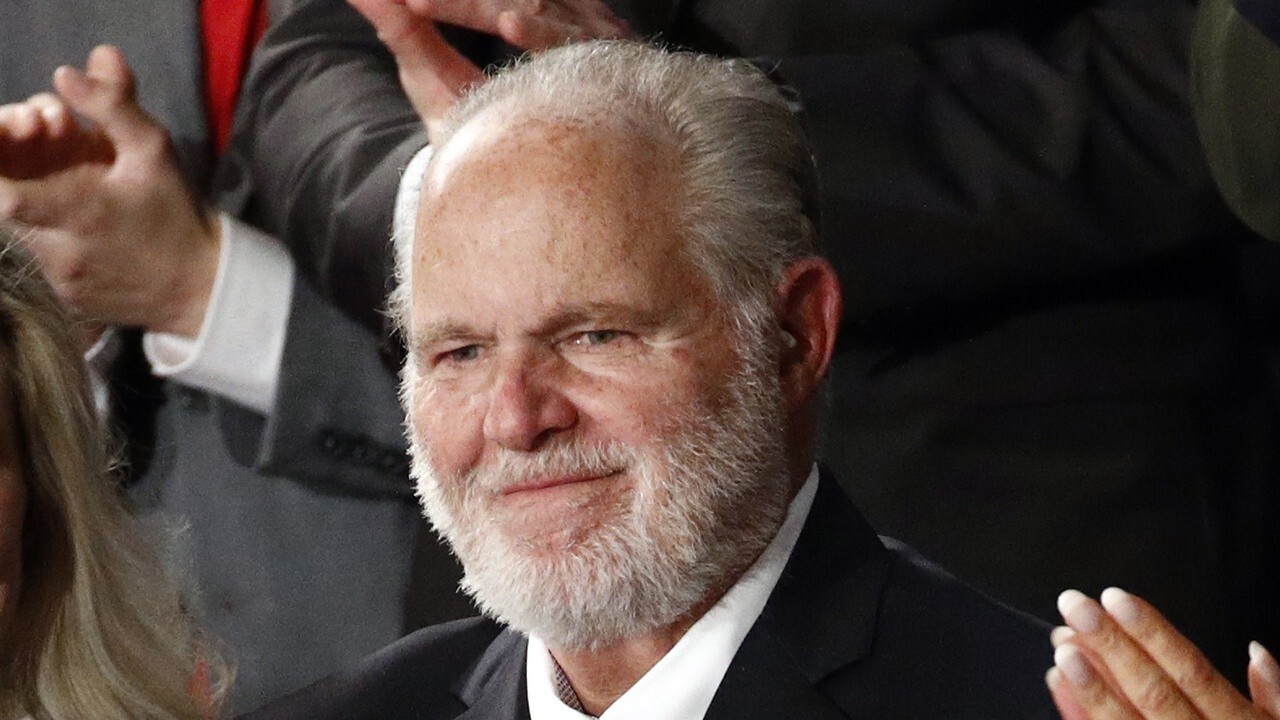 Limbaugh helped boost Trump’s influence prior to the 2016 election simply by taking him seriously as a candidate when other established conservatives didn’t want the former reality television star anywhere near the Republican Party. Many of Limbaugh’s listeners eventually became Trump supporters and the radio legend continued to defend Trump throughout his presidency despite occasional disagreements.

In the heat of the 2020 presidential election, Limbaugh hosted Trump in October for what was an unprecedented two-hour "radio rally", during which the president was virtually given control of the coveted golden microphone to answer questions from the host and his listeners.

Limbaugh, born in Cape Girardeau, Mo., on Jan. 12, 1951, began his radio career in 1967 as a "helper" when he was only 16 years old. He eventually graduated to disk jockey and worked at a small station roughly 100 miles south of St. Louis while attending high school.

"I was totally consumed," Limbaugh told the New York Times in 1990, noting that his idol was a Chicago radio host named Larry Lujack. By 1971, Limbaugh was a morning radio host in Pittsburgh, where he was oddly told to cover a certain amount of "farm news" because the area was surrounded by many agriculture communities. In 2007 he explained to listeners how the young radio host managed to keep listeners despite the bizarre requirement.

Rush Limbaugh in his studio in an undated photo. (mark peterson/Corbis via Getty Images, File)

"The last thing that the audience of my show cares about is farm news. If farm news came on, bam! They pushed the button and go somewhere else. So, we had to figure out, ‘Okay, how do we do this and protect the license?’ So I turned the farm news every day into a funny bit with farm sound effects and the roosters crowing and so forth, and I’d make fun of the stockyard feed prices or whatever it was, so that we could say, ‘We’re doing barn news,’ agriculture news. There was all kinds of things like that," Limbaugh told listeners.

The tidbit offered a glimpse into Limbaugh’s early days, proving that he was a master of keeping audiences engaged from a young age. Limbaugh has said he realized America was the "greatest country ever" when taking trips to Europe and Asia in his late 20s and early 30s, an experience that helped shape his political views.

"I’m aware that the United States is young compared to countries in Europe and Asia that have been around for hundreds of years. They’re thousand-year-old civilizations," he told listeners in 2013. "So, I go to Europe and say, ‘Wait a minute. Why is this bedroom so damned old-fashioned and doesn’t work? What the hell is this? They call this a toilet?’ So I started asking myself, ‘How is it that we, who have only been around 200 years, are light-years ahead of people that have been alive a thousand?’ So, I started thinking this. It was a matter of genuine curiosity to me, and not from a braggadocios standpoint." 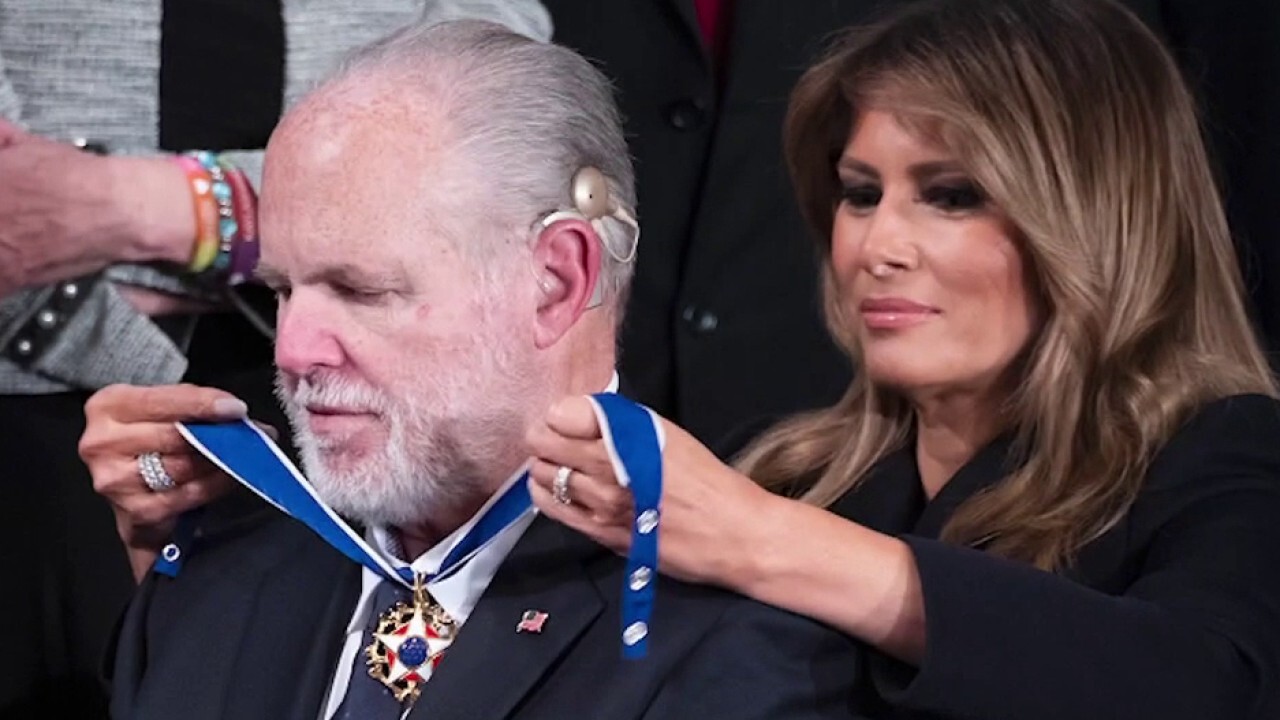 Limbaugh continued the trip down memory lane: "I was literally interested in how that happened, and then I started to think about all the other things that we led the world in: Manufacturing, technology, innovation, invention, creation, and it all led back to liberty and freedom and the pursuit of happiness and dreams coming true and working hard for whatever you want and being able to do what you love, not just have to dream about it."

PHOTOS: RUSH LIMBAUGH THROUGH THE YEARS

From that point forward, Limbaugh believed that "American exceptionalism" shouldn’t be frowned upon, and his conservative views became more prominent.

"We stood for the concepts that are in our Declaration of Independence: Right to life, liberty, pursuit of happiness. We stood for that, and we were the beacon for it, and to this day that is why the oppressed of the world still seek to come into this country," he said.

"He single-handedly is responsible for my learning to form and frame my beliefs and express them verbally in a concise and understandable way," Limbaugh once said.

In 1987, the Federal Communications Commission repealed the Fairness Doctrine, a policy that had been in place since 1949 and mandated that both sides of controversial political issues receive equal time on radio programs. The decision by the FCC paved the way for Limbaugh to broadcast his conservative views without fear of being punished by the government, quickly leading to the now-prominent talk radio format that he pioneered.

After local radio gigs in Pittsburgh, Kansas City, Sacramento, Limbaugh landed at WABC in New York shortly after the Fairness Doctrine was repealed. It was there that he changed talk radio forever when "The Rush Limbaugh Show" became a cultural phenomenon for both the message and the way it was delivered.

"Unlike most radio talkers, who affect a casual, intimate style, Limbaugh sounds like he's on a soapbox. He is intoxicated by words, especially those flowing from his own lips. His vocabulary is extensive; his diction tends to the grandiosely formal, though overblown to the point of self-parody. His nervous energy plays out through hands that never stop moving. They rattle the papers, slap the desk, punch the console. Whap! Whap! Whump! This muted percussion is often heard on the air, a rhythmic accompaniment to Limbaugh's voice," author Lewis Grossberger wrote in New York Times Magazine in 1990. 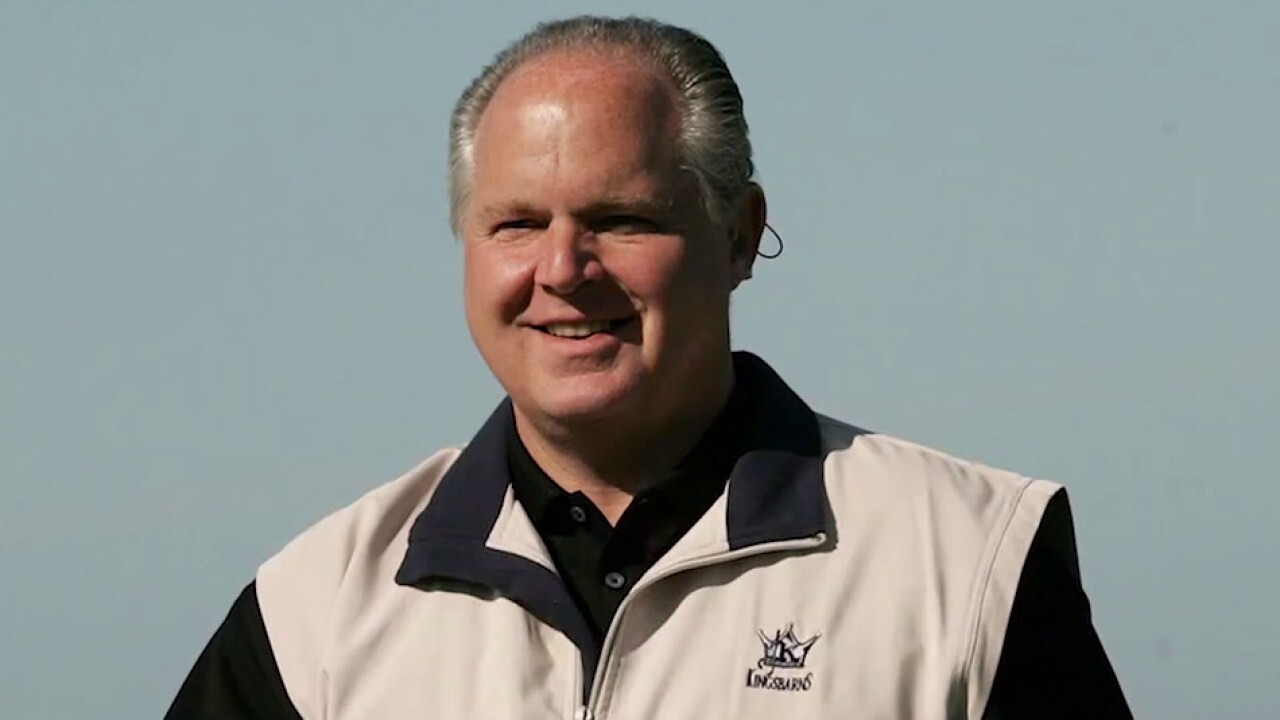 At one point after early struggles to find success in the radio business, Limbaugh temporarily left the industry and worked for the Kansas City Royals baseball team. Lucky for conservatives and "Dittoheads," he eventually returned to radio.

"Thanks for all you’re doing to promote Republican and conservative principles. Now that I’ve retired from active politics, I don’t mind that you have become the Number One voice for conservatism in our country," President Ronald Reagan once wrote in a letter to Limbaughthat was published by National Review in 2003.

"I know the liberals call you ‘the most dangerous man in America,’ but don’t worry about it, they used to say the same thing about me. Keep up the good work. America needs to hear the way things ought to be," Reagan continued.

Limbaugh was eventually enshrined in the Radio Hall of Fame and the National Association of Broadcasters Hall of Fame. He was a five-time winner of the National Association of Broadcasters Marconi Award for "Excellence in Syndicated and Network Broadcasting," a No. 1 New York Times bestselling author and was named one of Barbara Walters’ 10 Most Fascinating People in 2008 and one of TIME’s 100 Most Influential People in the World in 2009.

While Limbaugh made his career on radio, a speech he delivered at the Conservative Political Action Conference (CPAC) in 2009 is widely considered one of the most important moments of his career -- an explanation of "who conservatives are" that caused the crowd to erupt with chants of "USA! USA!"

"We love people. When we look out over the United States of America, when we are anywhere, when we see a group of people, such as this or anywhere, we see Americans. We see human beings. We don't see groups. We don't see victims. We don't see people we want to exploit. What we see -- what we see is potential. We do not look out across the country and see the average American, the person that makes this country work. We do not see that person with contempt. We don't think that person doesn't have what it takes. We believe that person can be the best he or she wants to be if certain things are just removed from their path like onerous taxes, regulations and too much government," Limbaugh told the crowd.

"We want every American to be the best he or she chooses to be. We recognize that we are all individuals. We love and revere our founding documents, the Constitution and the Declaration of Independence," he continued. "We believe that the preamble to the Constitution contains an inarguable truth that we are all endowed by our creator with certain inalienable rights, among them life, liberty, Freedom and the pursuit of happiness."

In 2001, Limbaugh was diagnosed with an autoimmune inner-ear disease that drastically affected his hearing.

In 2003, Limbaugh checked himself into a treatment facility after becoming addicted to pain medication that he was prescribed following back surgery. Also in 2003, Limbaugh resigned from a brief role as ESPN’s "Sunday NFL Countdown" after making controversial comments about then-Philadelphia Eagles quarterback Donovan McNabb, who the broadcasting legend said was overrated by media members who wanted to see a Black quarterback thrive.

Limbaugh is survived by his wife.

Posted by theodore miraldi at 2:06 PM