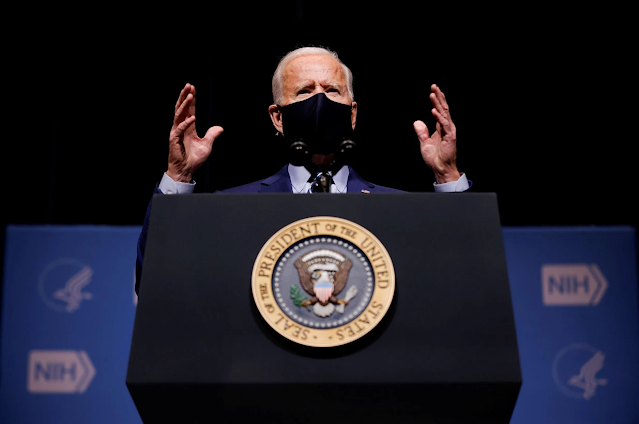 Now that the election is over and President Biden is installed in the White House, it’s safe for the truth about his character to dribble out.

And what do you know? Turns out the ethical standards of “Honest Joe” aren’t worth a hill of beans.

Starting with the obvious, Hunter Biden is still in business with the Chinese Communist Party.

So much for Joe’s promise that “no one in my family will . . . have any business relationship with anyone that relates to a foreign corporation or a foreign country. Period. Period. End of story.”

But that was B.E., before the election. Everything’s changed now.

Biden watered down his family’s ethics rules immediately after the election to a vague statement about “appropriate distance” from the presidency.

“My son, my family will not be involved in any business, any enterprise, that is in conflict with or appears to be in conflict, with the appropriate distance from, the presidency and government,” he told CNN in December.

Joe’s younger brothers, Frank and Jim, know what the rubbery rules mean: The Biden family’s influence-peddling business can continue as before, only better, with an actual sitting president to sell.

Frank wasted no time, with a two-page newspaper ad on Inauguration Day touting his relationship with “my brother” for the South Florida law firm which pays him as an adviser, even though he isn’t a lawyer.

Of course, there is still that pesky issue of federal criminal investigations hanging over the heads of Hunter and Jim, another truth bomb which stayed hidden from the American people until after the election.

But, wouldn’t you know it, on Day One as president, Joe installed the law partner of Hunter’s defense lawyer to lead the Justice Department’s criminal division, the very division which is investigating his son and brother.

“The president is committed to ensuring we have the most ethically vigorous administration in history,” White House press secretary Jen Psaki told reporters at the start of the Biden presidency.

It’s a refrain we hear often from Biden and the White House, about just how honest and ethical he is.

But people who feel the need constantly to tell you how honest and ethical they are in life always turn out to be quite the opposite.

In an interview with People magazine published on Monday, the president and First Lady Jill Biden gushed that Joe was restoring “trust” in government and boasted about his unimpeachable ethical standards.

Asked about Hunter, Joe came up with a whole new formulation for Biden family ethics rules: “No one in our family and extended family is going to be involved in any government undertaking or foreign policy.” Hmmm. What happened to the ban on foreign business relationships?

Then Joe told People a curious tale, which raised more doubts than confidence in his personal integrity: “I remember years ago an accountant said, ‘You know, you can charge part of the gas you use in the vehicle at your home.’ And I said ‘No’.

“Here’s how I look at it: The foul line is 15 feet away from the basket. Never get me closer than 17 feet, because it really is a matter of the public trust.”

Look, if you have a legitimate business expense, such as the fuel you use while driving for work, then you are entitled to be reimbursed, as millions of Americans are each year. Few things are more black-and-white in expense claims than gas mileage.

Perhaps Joe is so wealthy that 57.5 cents per mile is chicken feed, but he didn’t say “No” to his accountant’s advice out of concern about the ethical ambiguity of claiming for gas, because there isn’t any.

There is no need to move his supposed ethical “foul line” two feet further away than everyone else’s, because the rules are utterly straightforward.

He was pretending, as he has his entire career, that he is more honest than the average Joe.

So the only rational response to such ostentatious virtue signaling is skepticism.

It’s not as if you have to peer far into the past to find a genuinely dubious ethical decision by Joe.

Just last Sunday, he promoted Hunter’s new book in a CBS interview on national TV played before a Super Bowl audience of 96 million, in the very week the publisher launched the marketing campaign.

Even Obama administration ethics czar Walter Schaub said it was wrong, in since-deleted tweets blasting Joe for joining Hunter’s “book promotion tour . . . This is not the way to model strong government ethics”.

Nope. Nor is the fact that another hyperbolic statement of self-virtue from “Honest Joe” has fallen apart in less than four weeks.

The immediate reaction to Biden Deputy Press Secretary TJ Ducklo hissing “I will destroy you” at Politico reporter Tara Palmeri, and deriding her with sexist vulgarities, was to send him home for a week without pay.

It was a far cry from Joe’s Inauguration Day threat to staffers: “disrespect or talk down to someone, I will fire you on the spot, no ifs, no buts.”

On Friday, the hapless Psaki tried to justify Ducklo’s abuse as a natural consequence of Politico reporting on his “private life”.

The penny finally dropped Saturday night and Ducklo resigned, but the delay says it all.

Talk is cheap in the Biden White House.

Subway spree is no shock

Are we surprised that the alleged A-train serial killer is a mentally ill, homeless drug abuser whose past arrests include an alleged assault on a cop? Of course not. This is Bill de Blasio’s New York, after all.

Rigoberto Lopez, 21, was arrested Saturday, less than 24 hours after a subway rampage in which he allegedly stabbed four people, two fatally.

Great work by the NYPD, but he never should have been on the streets after the last four times they arrested him.

Nor should we be surprised that the victims also were homeless. It was only 16 months ago when four homeless people were beaten to death in Chinatown by another vagrant. De Blasio did nothing and life just grew more dangerous for the city’s ballooning homeless population.

New York has been failed by destructive criminal justice reforms from woke lawmakers in Albany, a rabidly anti-cop mayor and lax judges and prosecutors batting for the wrong team.

They all pretend it’s compassion for the underdog that drives them, but any cop can tell you that going easy on criminals only hurts the vulnerable most.

It’s disgusting that the lawyers defending Donald Trump in his impeachment trial have had to hire private security after their homes were vandalized and their businesses assailed.

“My entire family, my business, my law firm are under siege right now.”

He begged the country to “heal” from the political hatred which spawned a summer of violent riots and the storming of the Capitol.

But there’s no chance of healing while Nancy Pelosi is House Speaker.

She looked unhinged when she burst into her impeachment managers’ post-mortem press conference Saturday to vent her spleen against the 43 senators who voted to acquit Trump.

They were “a cowardly group of Republicans” and losers who have “no options” for another job.

The Speaker’s role is supposed to be revered, but Pelosi is so hooked on hatred and spite she brings all of Congress into disrepute.

Posted by theodore miraldi at 8:35 AM